By Capt. Lee Haasch - May 1, 2013
The sun is peaking over the orange horizon, a wisp of clouds makes the morning sky seem like a Terry Redlin print with the firey orange sky and calm blue water, the first mate is adjusting a port dipsy line, the captain, well I'm enjoying my first morning cup of coffee…suddenly, "FISH ON, FISH ON !! FAR BIRD! SEE 'EM JUMPING?" Aah, the sounds of spring! It's all music to my ears! I just love early spring fishing. And the most exciting, are those feisty, acrobatic steelhead. 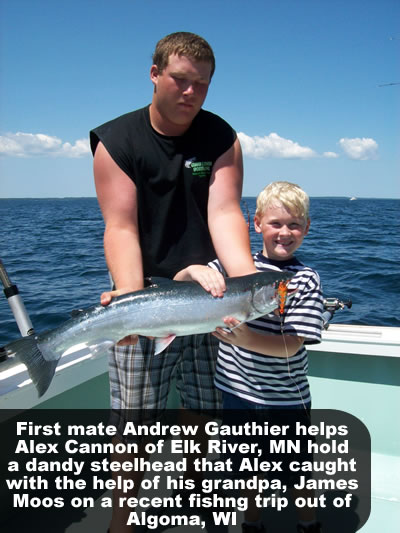 Those silver torpedoes, feed near the surface, well most of the time anyway. When they spy that streaking spoon following behind that small inline planner board, well, they just go nuts! Like a streak of lightening, they will aggressively attack that spoon with the speed of a world-class sprinter and grab that spoon and shoot out of the water like a rocket, followed by as many as a dozen tail dances before hopefully finding the basket of my Frabill net.

We are experiencing a later spring than last year. After seeing 70 degree temps in March of 2012, boaters hit the beaches earlier in search of the brown and lake trout feeding along the shoreline. This year was just the opposite with ice anglers seeing an extended fishing season with below normal March temps. This means the lake will "turn over" a bit later than normal. Turning the lake over is when the warmer bottom water slowly rises to the surface and the cooler surface water sinks back to the bottom. This happens on all lakes and is what allows lakes to freeze over in the winter. Once this happens, thermoclines will start to form on both the surface and below the surface. When this occurs, steelhead will tend to gravitate towards those temperature breaks and feed on surface bugs and small young of the year alewife that get gathered on those current breaks. In 2012 this happened very early, in late April, this year I'm looking for this to happen much later, possibly late May. What a difference a year makes!

I really enjoy fishing this time of year, largely because the excitement and the aggressiveness of the fish in the cooler water temperatures. Another theory for spring fishing is the abundance of fresh fish in the schools. These fish are very active in the spring and really haven't been fooled by any artificial bait all winter long. Couple that with the fact that aggressive fish, like steelhead can be fished at faster speeds with spoons and action can be quite vigorous. Being able to put a spread of planner boards out with a variety of hot steelhead colors like Warrior Lures' Hot Banana, Orange Crush and Jelly Bean or R & R's Razor spoons in Flamethrower, Monkey Puke and Watermelon, kind of gives me the shivers every time I see those streaking steelhead dance on the water trying to tear up one of those spring time favorite lures!

Most steelhead are spring spawners and this year the streams and rivers were full of spawning steelhead by mid-March. Once they completed their spring ritual, they return to the lake and actively seek out food. There were a fair amount of steelhead that teased anglers trolling the shoreline for brown trout in April, but most head deeper looking for young of the year alewife and other bait. As the lake starts turning over, large amount of bait rise to the surface with the warmer water and along with them come the hungry steelhead. As a bonus, expect to see a mixed bag of adventure with the occasional surface feeding lake trout and of course, those ever hungry, king salmon!

As thermoclines begin to set up I pay particular attention to the surface breaks. Many times as a thermocline rises to the surface, it can cause the surface to boil. This current created by the thermocline, will gather baitfish near the surface and bugs and dead or dying bait on the surface. This creates what everyone commonly calls a "scum line". Intense breaks can be flat calm on one side of the break and a rolling boil on the other. Trolling along these "scum lines" can be productive especially if there is a couple degree temperature break on the line. I like to zigzag across these lines until I can determine which side of the line holds the actively feeding fish. I have already found that both sides of the line held active fish, one side being steelhead and the other side had feeding Coho salmon.

While a lot of anglers like to pull flasher/fly combinations, this is a time of the year that I like to run spoons. I find that I can pick up my speed and cover more ground searching for pockets of feeding steelhead. Spoons are more speed forgiving and the steelhead are somewhat of a surface sight feeder and aggressively attack flashing objects skimming through the top 15 feet of the water column. I prefer spoons with lots of orange, pink or red and also yellow or chartreuse. On sunny days I like the silver backed spoons and on cloudy, darker days gold or copper spoons seem to work better. Old stand-bys like watermelon and dolphin colors are great on the slide divers.

Quite often these thermoclines happen over fairly deep water and the northern part of Lake Michigan around the Algoma area affords the opportunity to get to relatively deep water pretty close to shore which helps with gas and run time. For more information on launching or lodging information in the Algoma area go to the chamber's website: www.Algoma.org. For charter information or fishing reports visit my website at: www.FishAlgoma.com or call 1-888-966-3474. From Capt. Lee and the crew aboard the Grand Illusion 2, good luck and good fishing!

Capt. Lee Haasch
Lee Haasch is owner and operator of Haasch Guide Service based in Algoma, WI. Lee began his fishing career in 1972, specializing in Lake Michigan trophies. Very few captains on the great lakes have logged more hours than Lee when it comes to sport fishing. With over 35 years of Lake Michigan sport fishing experience under his belt, you can bet he knows how to find fish.
TRENDING DISCUSSIONS
Advertise here
Advertise here
Please take a moment to visit our sponsors. Without them we would not be here.