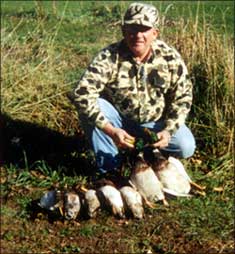 It was late October, and a period of unseasonably warm weather had kept the "local" flocks around longer than usual, and prevented migrating ducks from filtering in.I had located a small backwater area that had not received much pressure since the opener, and luckily we were the only hunters there this warm,sunny, October morning. My client, and friend, Bill, a veteran duck hunter originally from Canada, had his lab Mollie along, giving my dog a well deserved rest.Hunting was slow,when I caught the attention of a small flock of 20 or so Mallards.My Mallard Hen talk got them headed our direction,but these "educated" birds had heard this before, and I knew it would take something different to bring them all the way! When hunting pressured ducks in Wisconsin public marshes, doing something a little different, or finding a small, out of the way spot, can payoff.Most weekend waterfowl hunters in marshes like Horicon, or Grand River,head for the big open areas next to the refuge with the rest of the crowd.While these hunters typically see alot of birds,they are usually high, and on their way in, or out of the refuge!Don't get me wrong,these are still great spots,especially for migrating ducks,but for those tough,educated Mallards, you must get away from the crowd. 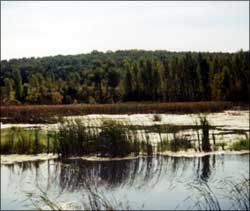 Scouting is the key to this type of hunting! Watch the marsh from a vantage point,and you will see singles, and doubles, dropping into small,backwater potholes, just before dark.These ducks will usually be Mallards, Gadwall,Widgeon, and Teal,who unlike refuge ducks,do not sit on open water in flocks! Instead they will land in these small openings, and swim into the cattails to hide for the night.Just to give you an idea of how small these areas are, I have hunted some of these small openings, that offered only maximum 30 yard shots! In this type of situation you must exercise self control when shooting, or surely you will loose wounded birds in the cattail masses.You definitly cannot hunt these areas without a good retreiver,but even seasoned veterans like my lab,"Bear",cannot produce miracles everytime! SO YOU MUST PLACE YOUR SHOTS!!!

Another small, but effective trick, is using a couple Teal, or Wood Duck decoys, with your Mallards.Most hunters in marshes use only Mallard decoys, usually magnums.While magnum decoys will surely help in calling the ducks from a distance, on those critical,final passes, something more natural will be effective.In small openings,ducks are used to seeing a few Teal or Wood Ducks swimming around the edges of cattails.So,especially in the early season,I will add some Teal or Woody decoys in the edges with my Mallard blocks for realism.If you are planning on buying some Teal decoys, a 4-pack of Greenwinged Teal will work best,as these ducks are around till the end of season.Of course the rotating wing decoys are also very effective, but thats a controversial subject we won't get into right now!

Last, but not least, is the little twist that I was getting to earlier in the article. Everyone seems to be an expert Mallard Hen Quacker these days, and the rage seems to be excessive calling! To make my setups a little different,I like to use Wood Duck calls with my Mallard calls earlier in this season, as this not only brings more Woodies, but Teal, and Mallard as well.Later in the season I switch to Widgeon, and Pintail whistles, as well as Mallard Drake calls.The kicker to using these calls,is the ducks need to be closer to hear the softer whistles, but it's the finisher, or the icing on the cake, on those final passes! 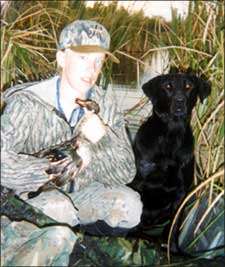 So to finish my earlier story, after some gentle coaxing with the Mallard Hen call, the flock of mostly "greenheads" was on their 4th pass over the decoys. As they started to swing away I threw in some Mallard Drake calls with the feeding call, and this brought them right around! Finally they were headed for the preplanned landing pocket we had arranged in the "dekes", with wings set! Just as they were about to land in the opening, Bill, and I opened fire!!! Needless to say, after the smoke cleared, Mollie had her work cut out for her.Just as Bill sent Mollie on her first retreive, he turned to me and commented, "that sure was beautiful"!

Try a few of these subtle tricks this fall when those wily Mallards just won't come that last 25 yards, you might just end up with some "greenheads" when others are only seeing sky-high ducks.Good Luck in the Great Outdoors, and please be courteous when hunting public lands. If someone else is working a flock that swings over your spread, shoot only if their wings are set to land in your decoys!!!