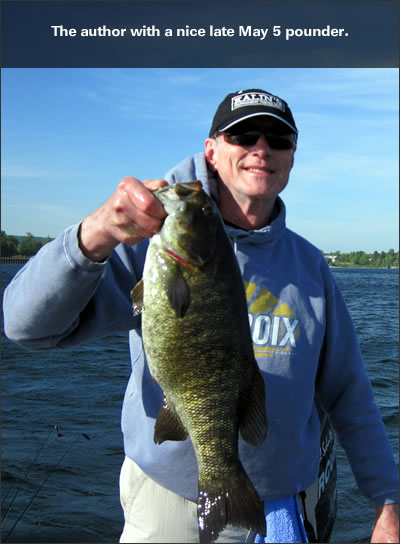 During the past 18 years, mostly in May and June, I've spent over 175 days chasing smallmouth bass in Door County. I've been rewarded with catching and releasing over 5,000, with dozens over 4 pounds, many 5 pounders and some over 6 pounds. Many of these big fish have come in the past 5 years due to a change in my presentation.

Over the years I've tried many lures on the waters of Door County. Believing in keeping it simple, I've narrowed my presentations to those that work best, based on my experience, reading articles like this and talking with other bass enthusiasts. One presentation that is usually near the top of most Door County lists, and at the top of mine for the past five-years, is swimming a grub on a jig. Not just any grub, but a Kalin's Lunker Grub. I'd always spent some of my time on the water swimming a grub, but with only moderate success. It was my last day on the water in June 2007 that finally, after hearing about them for years, gave the Kalin's Lunker Grub a try. I quickly found that this grub was different from the rest I'd used.

With the ultra-clear waters of Green Bay, long casts are essential and to help gain extra diastance, I use St. Croix 7'6" and 8' medium-light and medium action rods. I prefer lighter spinning reels suitable for 110 to 135 yards of 6-pound diameter mono line, but have been using a variety of braids and superlines in 2 and 3-pound equivalent to mono diameter. These will have a rating of 8 to 15-pound test, have tremendous strength to diameter, are extremely sensitive and offer excellent casting distance. Adding mono backing when spooling is a cost savings, as braid/superlines are more expensive than mono. Because of the ultra-clear water, I utilize a 30 to 36 inch fluorocarbon leader, which is strong, sensitive and invisible in the water. I began utilizing the 8 or 10-pound test fluorocarbon leader in 2008. I attach the leader to the braid/superline with the "uni to uni" knot, and have not lost one fish due to that knot failing.

How to: Size, Colors, Favorite Jigs and Techniques

The key to the Kalin's Lunker Grub is the full-body profile and long/tall wispy tail, along with great colors to choose from. You will hear that you should swim these with the tail pointing opposite from the hook point. Actually, this is the way the Kalin's were designed. I rig them this way, and when a grub gets a little beat-up, bite off an eighth to quarter inch and reverse the tail direction. The smallies still seem to like it. It's very important to line the hook shank with the seam so that the grub swims straight.

I've had great success with both the 4-inch and 5-inch versions in a variety of colors, including Ed's Smoke, Clear Smoke, Smoke Salt & Pepper, Avocado, Dirty Avocado, Apple Juice and Blue Pearl Salt & Pepper (better in semi-clear waters). But, my favorite color is Smoke Salt & Pepper. A few of the colors I mentioned imitate the color of the round gobies, which have become a major food source for Door County smallies. Also, since the goby invasion, the weight to length ratio is skewed to heavier fish than one would expect. A dozen years ago a 19 inch fish would almost never weigh more than 4 pounds, but now it's not unusual for a 19 inch fish to go well over 5 pounds. How about a 16 plus inch fish that weighs 4 pounds? I've caught a few of these. Those little goby "protein" bars are adding weight. 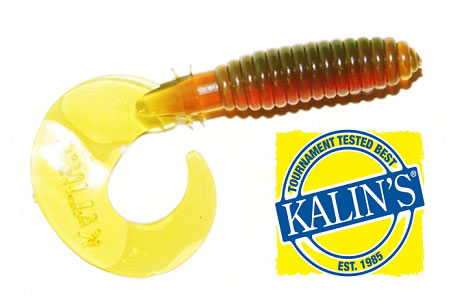 The jig is an important part of this presentation. My favorites are the Gopher Tackle Big Johns in 1/16 ounce (new for 2013) and 3/32 ounce with 2/0 hooks. These have the mushroom head that fits perfectly against the head of the grub and have a longer hook shank, which allows you to bring the hook through the grub body and out near the end of the body just before the tail begins. They come in a variety of colors, but I use black and unpainted.

Using the Kalin's Lunker Grub could not be easier. As noted earlier, with the ultra-clear water, cast as far as you can, retrieve steady and as slow as you can without touching the bottom. If you touch rocks, speed your retrieve a bit. Whether the water temperatures are cold, warm or somewhere in between, retrieve as slow as you can. This produces the most undulation of that great tail, which is tough for bass to pass up. In May and June, the smallies are in shallow and hanging close to the bottom in water that is one to seven feet deep. 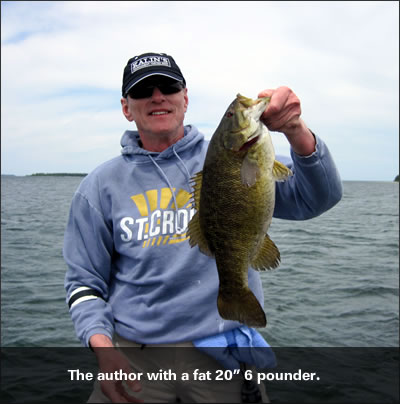 What Structure to Look For

Door County has over 300 miles of shoreline on Green Bay and the Lake Michigan side. In general you will find more fish on the Green Bay side, but numbers are growing on the lake side. On the bay side it's tough to find locations that don't have the structure you will be looking for, which is rocks, boulders and occasionally vegetation. From a structure standpoint, you're a kid in a candy store. On the bay side you will find smallies from south of Little Sturgeon Bay all the way to Gills Rock, and after the season opens on July 1, Washington Island. As noted, on the lake side, the smallies are not in every location, but you will find them from south of Baileys Harbor all the way to the tip of the peninsula.

From top to bottom, you will not be disappointed with the boat launches in Door County. The county launches are outstanding, as are the launches in all the communities on both sides of the peninsula. Potawatomi and Peninsula State Parks also have very nice launches. Last fall water levels were at a historic low and even with our wet spring, will be very low this year. Watch the bottom when motoring in shallow water with a good pair of polarized sunglasses. Ideally, this will save doing damage to your engine's lower unit.

Give it a Shot

A great thing about Door County, is that you don't need a big bass boat to have a great time catching smallies. Along with my Crestliner, I'm on the water a number of times each spring with one of my Wilderness Systems kayaks. There are plenty of shorelines and bays that provide protection from the wind. If you pay attention to the wind and weather, you can have a great time in boats of all sizes. I've even spent time fishing in my waders.

If you are planning on fishing smallies in Door County, another of your favorite lakes or on rivers, I would encourage you to give swimming a Kalin's Lunker Grub a try. You'll be happy you did.