By Tom Neustrom - May 1, 2013
Build up some speed and a dog will nearly put its head through the window to catch a breeze. Our canine companions lose sense of place and time, not to mention discipline when the truck starts cooking down the highway. Albeit for different reasons, walleyes will also drop everything when a wind whips up. Instincts take control and nature's programming says the moving air is also heating up the kitchen.

Wind creates what I call a 'food table'; a smorgasbord of consumables. An onshore wind activates the water, spawning an entire food sequence in the shallows. It traps foodstuffs there, too, waves beating against the shore. Walleyes sharpen teeth and tighten their bibs...

Relative to wind and waves, it's also a truism that walleyes prefer moving water. They thrive in rivers. And when relegated to a lake, any sign of agitating water, be it a current or wave action, serves as a summons. 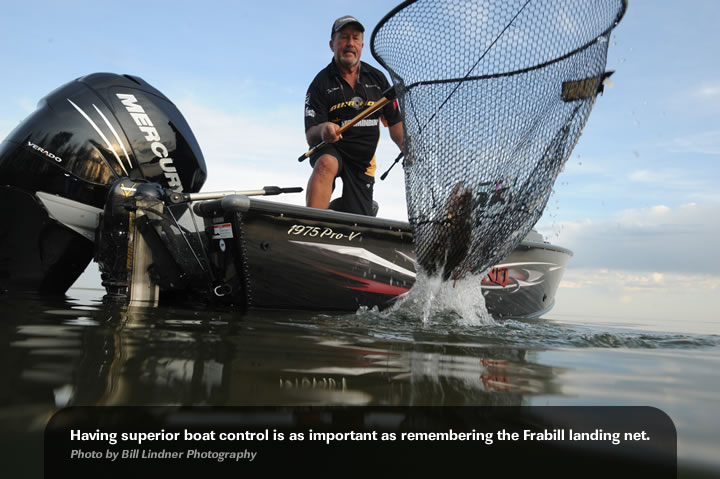 Wind also causes walleyes to establish in definable areas. On flat calm days the tendency is for fish to scatter while foraging. Those same fish will consolidate in a gale, establishing on the windward side of structural shallows.

In the spring, wind speed directly affects walleye depth - shallower as it gets windier. The waves break up light penetration, too, which promotes daytime feeding. About the term 'shallow', in my book it means anything 10 feet or less. In colored water, 'shallow' labels depths of only 2 to 5 feet. And I'm constantly reminding folks to never consider a spot too shallow. I've hooked countless walleyes in sub 4 feet, but only with a hearty onshore chop.

Not all wind-pummeled shallows are created equal, though. Tapering breaks are superior to sheer walls - more roiling; more space for baitfish; more walleyes. Best bottoms in my experience feature gravel, small rocks and grassy weeds sprouting from the lake floor. Any combination of the above creates the 'All American' spot.

A short real-life story about how wind commands the bite: A couple walleye openers ago, I was plying Minnesota's Leech Lake - a renowned shallow water fishery. We boated 33 walleyes for three anglers. (Yes, I keep track.) All were smacked in windblown-, weedy-, gravel-based shallows. By comparison, some friends of mine opted to fish traditional points and humps. Wind direction wasn't considered; instead, just beautiful structures on a map. They only scared up two walleyes for three boats. Suffice to say our boat was responsible for dinner.

Even given an onshore wind, I still won't invest time in the area without first probing electronically. Humminbird's Side Imaging shoots into the shallows and shows weeds, rocks, walleyes and baitfish - or nothing, and I move along.

Humminbird's Down Viewing feature literally displays walleyes and baitfish in as little as 5 feet of water. I can cruise along marking the shallow water below while simultaneously firing a sonar beam even shallower. Now that's covering water. 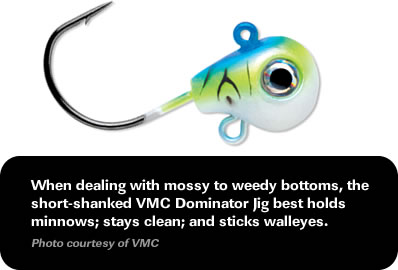 What I consider 'fishable' winds are anything out to about 20 MPH - anything over 25 gets downright dangerous. Operating in even a 10-MPH wind requires serious boat control. Yes, practice is in order, but offshore so you don't slam into shore during training camp. Backtroll or gun it with the bow-mount Minn Kota. Either way, learn how to hold steady against the wind.

The actual design of the watercraft matters, too. Lund Boats tame wind like none other. Engineered for mitigating rough water, the reverse chines, power strakes and rails on the IPS and IPS2 hulls promote control trolling into a wind and motoring on plane.

Having a number of quality neighborhood fisheries to choose from, I also apply wind direction to the best structure on a properly positioned lake. Some lakes just don't fish well in certain winds. You want wind pelting particular shoreline structures.

How long it takes for consistent wind direction to energize an area varies, however. In calm conditions, wind can activate a spot inside hours. By comparison, it can take 12 to 24 hours for a wind change to take effect. With those beliefs in mind, I monitor wind direction for a couple days leading up to a fishing trip.

Are some wind directions better than others? Yes, to some degree… Steady south and southwest breezes produce best, followed by westerly and then northwest winds. East is okay if it's stable for a couple of days. But that northeaster is a downer. It usually partners with a fluctuating barometer and the results are seldom good. Consistent wind, however, plays a more significant and positive role than the actual compass direction.

Honestly, if you nail down the wind thing and are captaining with control, the rest is gravy. Needn't get any more complicated than a jig and minnow. The jig gets you in the money zone. The minnow? it's what's for dinner.

And fish small, or more accurately use as light of jigs as possible. 1/16-ounce jigs offer enough gravitational pull most of the time. Upsize to a 1/8-ounce if smaller jigs are getting blown around. The goal is maintaining control with as light a jig as possible. Light jigs can be fished slower, which is in sync with cold water walleye feeding behavior.

Casting wins out over drifting, too. Blasting through on a speed-drift achieves nothing. The bait needs to swim slowly and methodically. Blanket the water by establishing casting lanes for each angler. Hold in place; cast, cast, cast and then reposition. Using nature to your advantage, begin just upwind of the targeted range and hedge toward shore.

My preferred jig is a VMC Mooneye with its long shank and wicked hook - ideal for threading on live shiners or chubs. In weeded zones, the short-shanked VMC Dominator is a better selection.

By and large, I still prefer a premium monofilament over a superline. Six-pound Sufix Siege is my bread and butter for jigging. I will, however, switch to Sufix 832, a superline, in a particularly strong wind. It slices through gusts and doesn't bow as much.

Longer rods are the order of the day. For jigging, I recommend the price-conscious fast-action Daiwa DXW 6' 8" and 7" models. I was involved in the development of the DXW series. Goal was to build a guide quality walleye rod for under $100. We did it…

Match the DXW with all-around-performing Daiwa Lexa 1500 reel. It, too, performs like a champ at around $100. The Daiwa Procyn 2000 is the ultimate upgrade, and what I use on most of my combos.

Don't be that guy anchored behind the island. Yes, it's easy and carefree, but sucks for catching walleyes. They thrive in the wind. You have to brace the blow, maneuver in it, and you'll get that peaceful easy feeling back at the dock with fish to show.

Tom Neustrom
Tom Neustrom is one of the best fishing guides in Minnesota and a tireless promoter of the fishing industry with 33 years of experience backing him. Tom has been recognized by In-Fisherman, North American Fishing Club, Fishing Facts Magazine, and Minnesota Sportsman as one of the top walleye fishing guides in the country. Working closely with numerous publications, Tom writes constantly from his home in Grand Rapids, Minnesota, and enjoys sharing his knowledge and expertise in the sport of fishing with thousands of readers.Tom leads fishing seminars and workshops throughout the Midwest. He has led seminars and workshops in Denver, Buffalo, N.Y., Chicago, Milwaukee, Detroit, Mich., Bismarck, N.D. numerous cities throughout Minnesota, and many smaller towns and cities across the Midwest. For more information on Tom visit his web site at www.mnfishingconnections.com.
TRENDING DISCUSSIONS
Advertise here