Making Withdrawals from the River Bank 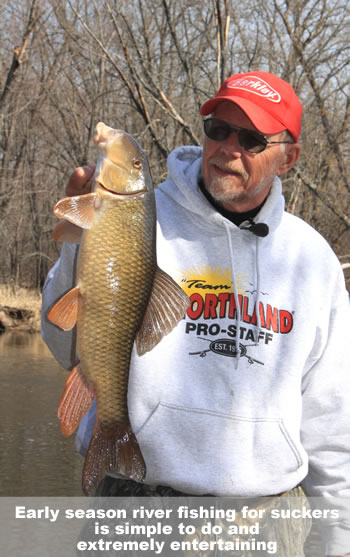 As I look back on my angling experiences from my youth, there are few memories that grab me like the ones spent fishing for suckers on the banks of a river. Now that I am a few years older and gray is a dominant color in my beard, I still relish opportunities to make withdrawals from meandering water.

It is not an easy task for me to put my finger on the specific appeal I have for this spring and early summer tradition. Maybe it has something to do with the peacefulness of watching the water slide by on a sunny afternoon. Maybe it comes from the patient approach of detecting bites on a pole propped up on a forked stick.

Some of it may have to do with enjoying the power of a good sized sucker as it uses the current to enhance the battle. And then again, it may be nothing more than just appreciating the sights, sounds and smells associated with a quiet day on the river.

There are several factors that make this spring and early summer adventure popular. First of all, most anglers live fairly close to some type of flowage that is going to have a population of suckers. Secondly, suckers are fairly easy to catch if you follow some basic rules.

Most of the suckers anglers catch are either members of the redhorse family or are white suckers. These bottom feeding fish spawn when water temps reach the mid forties. During the early spring, they make a noticeable spawning run and will be moving upriver towards spawning areas for several weeks.

Although the spring spawning action can be impressive, suckers continue to be active and easy to catch through much of June. The key is to find the right stretch of river to target.

Like other river fish, suckers love to travel along the current break between fast water and the quiet water of an eddy. The goal is to focus your efforts close to where these two contrasting water areas meet. Generally, the calm water of an eddy is not productive.

Suckers also like to rest and feed in the slow moving water of deeper pools. They will move back and forth in these areas looking for crustaceans and invertebrates.

The simplest method I know of for targeting suckers is a standard slip sinker, short leader, hook and night crawler. The specifics of this rig look like this.

The sinker needs to be heavy enough to keep from constantly tumbling downriver. A half or three quarter weight works well. I often use Northland Rock Bouncer weights because they do not roll in the current like barrel weights and are quite snag free.

Leaders need to be 12 to 18 inches. Suckers feed on the bottom and longer leaders will float the bait too high. Six pound-test Vanish fluorocarbon is about perfect for leader material.

I like a short shanked number four hook. I usually thread half a crawler onto the hook in a manner that hides as much of the hook as possible. Running some of the crawler up onto the line never hurts.

When a bite is detected, I give the fish a little time to chew on the bait. When the pressure feels right, set the hook!

Although most suckers fall into the two to four pound category, they are surprisingly scrappy fighters. Many anglers catch and release their fish while others keep some for smoking.

River fishing for suckers is a great family affair. It is simple, comfortable, and very entertaining. It is easy to get hooked on the concept of making withdrawals from a totally different kind of bank.