By Dan Small - March 1, 2013
It happens every year. The winter show season keeps me so busy that I barely have time to think about getting outdoors. I might sneak away for a rabbit hunt or two or perhaps an afternoon on the ice, but that's about it.

Inevitably, somebody stops at our booth to mention that the Root River is open and the steelhead are running. Chris Beeksma, who guides up on Lake Superior, and Darrell Warren, of Green Bay, used to show up every year, wearing big grins and smelling of spawn. They made the annual trek to the Root to get a first crack at open-water steelhead when the North was still locked in winter's icy grip. I don't know if they still make the trip or not, but I haven't seen them in a few years now. 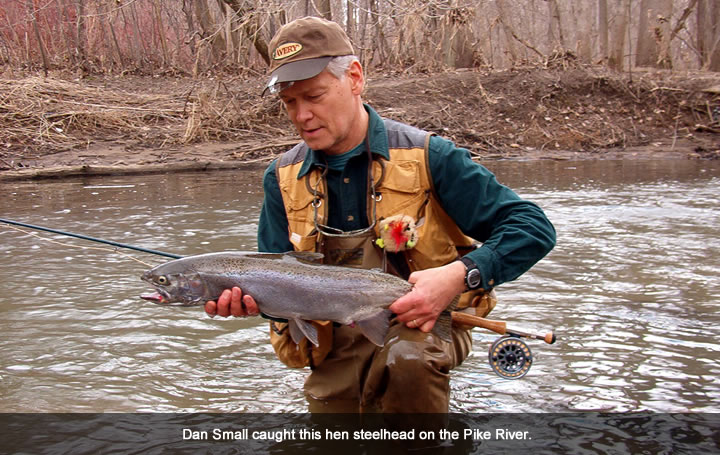 Fifteen years ago, news of open rivers and fresh steelhead was spread by word of mouth. Nowadays, thanks to cell phones and the Internet, most steelheaders have an electronic connection to the action, and word spreads in an instant. Web sites like lake-link.com and thesteelheadsite.com make it a lot easier to determine stream conditions and find out where the hottest action is.

Problem is, you still have to find time to go.

For me, the first half of March is still dream time.

So, while anglers with a more flexible schedule can hit the water at a moment's notice, I'll hang out in our booth and talk steelhead with any and all comers. And I'll dream.

I'll dream of a quiet run on the Pike River, where my cousin Brad and I found a pod of spawners one spring. It took some coaxing, but we managed to hook and land one apiece. One was a hook-jawed buck with a brick-red cheek patch and fire in his eyes, eager to get back to the redd and the spawning game. The other was a silver hen, fresh from the lake and laden with a promise that would never be fulfilled.

Steelhead spawn in earnest in our Lake Michigan tributaries, but most - if not all- of their eggs never hatch. Without the efforts of DNR fisheries crews to capture fish, strip their eggs and milt and raise fingerlings to stocking size, the only steelhead we would see in our East Coast tribs would be strays that wandered over from Michigan.

My dreams might take me back to an April day years ago on a tributary to the Manitowoc River, with the late Marty Kwitek over my shoulder and a fresh steelie in a shallow riffle. With his guidance, I made cast after cast, letting his Rainbow Shrimp slide past that fish's nose, at first too high, then too far away. When I finally made the perfect cast and that shrimp pattern drifted toward the fish, just ticking gravel, Marty said, "Have a nice fish!" 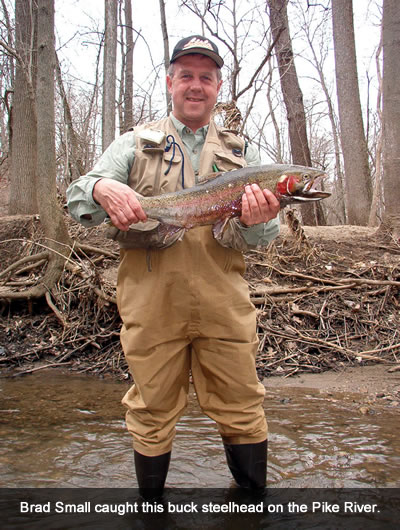 The steelhead took the fly, then went airborne, and for a frantic few minutes, I held on and tried to keep my balance. When the fish tired enough, I led her to Marty's grasp. He unhooked her, slipped her back into the current and stood up, holding the shrimp fly like some secret weapon.

Today, that fly rides in my vest, where it has more value than it would sitting in a case at home. I drift it carefully past one or two steelhead every spring. I don't want to lose it, but if I do, I'll still have the memory of a bright fish and a glorious April morning.

Or, my dreams might take me to a more recent outing on the Sheboygan River with Judy Nugent and guide John Matenaer. With a camera crew in tow, we were taping a segment for Outdoor Wisconsin. On an outing there years before, I had hooked and landed a big hen that had been spawning with a dark male. As I fought the fish, her partner stayed right with her, turn for turn. He hung just out of reach in a deep run as we slid her onto the gravel, unhooked her and released her. The pair swam off together slowly, like two dancers waiting for the next tune. Later, we found them back on the redd, as if our tryst had never happened.

On this day, John and Judy drifted big white flies in a deep run, while the crew and I watched from the bank. John hooked and landed a 3-pound smallmouth, then Judy hollered, "Fish on!"

She hung on, as the steelhead bulldogged deep, then headed downstream. I crossed my fingers and said a prayer that the tippet would hold and Judy not lose her footing, as she followed the fish around a big snag and into the swift current.

Her felt soles kept their grip on the slick rocks, and her tackle held. Eventually, she worked the fish into an eddy and John slid a net under eight pounds of spring steel. Judy wore a smile for the rest of the day. She deserved to, for a job well done.

Whether or not you get on the water this week, stop by my booth at the Sports Show; at the Southeastern Wisconsin Fishing and Hunting Expo, March 15-17 at Olympia Resort in Oconomowoc; or at the Sport & Home Extravaganza, March 22-24 at the Fond du Lac County Fairgrounds and we'll swap steelhead stories. I could use some more fuel for my steelhead dreams.