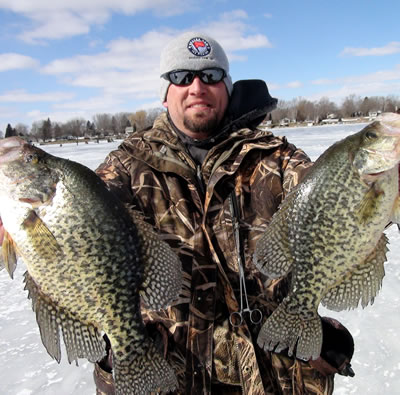 By the time March rolls around in the Midwest, many anglers have left the ice to pursue open water fishing opportunities, but for some diehard panfishermen, late ice is what they have been waiting for all season. During this relatively short and uncrowded window of opportunity, bluegills, crappies, and even perch are not only easy to find, but they are equally easy to pull through the ice.

There are numerous approaches to catching late ice panfish but my strategy is to target areas with the warmest water. Snow is gone from the lakes by this point in the game and the sun pierces through the ice warming the water and below. Shallow bays (under 10 fow) with a dark bottom absorb the sun's rays, and invertebrates which were dormant for the winter begin to emerge, ringing the dinner bell for a variety of fish species. Ideally, these shallow bays also have weeds that are fed upon by many of these invertebrates and which panfish use for cover - therefore the fish I am trying to catch stay in predictable locations. When weeds are not present, fish often school and forage nomadically throughout the bay which means lots of hole hopping to stay on the school. For ease in hole punching, mobility, and conservation of physical energy, I use an ice drill converter with an 18 volt cordless drill to make Swiss cheese out of the ice. Using a cordless drill is fantastic because I don't fatigue my arms cranking on a hand auger, it is lightweight and easily fits in my sled, and I silently punch holes in shallow water. Fire up a noisy gas powered auger and it can a long time for panfish to return after being spooked from these shallow haunts. Another good area to catch late ice panfish is where tributaries enter a lake. Streams and rivers, swollen from snow meltwater and spring rain, stir up sediment and the invertebrates within, resulting in a banquet of food flowing into the lake. Find a trib flowing into a bay with dark substrate and weeds and you have likely found the motherload! Obviously flowing water can quickly reduce ice thickness even though other parts of the lake are perfectly safe so be sure to carry your ice picks and even consider wearing a life jacket. Yet another place to get on fish is where old holes have water flowing into them. These holes flush a smorgasbord of spikes and wax worms discarded by anglers as well as a myriad of insects that have hatched and then died over the lake with the fluctuating temperatures. If the hole you find is big enough to pull a bull gill or giant crappie through then fish directly through the old hole - if not, drill one next to it and hang on!

Once I have drilled a couple dozen holes over a weed bed in a shallow bay it is time to get out the camera. I do not waste my time fishing where there aren't fish and an Aqua-Vu quickly eliminates unproductive water. If I don't find fish in the first weed bed I move on to another set of weeds in the bay (if there is one). If I blank again then I will move on to a completely different shallow bay or even another lake (don't give up on the initial spot though - fish might show up next week). When you locate fish it is time to wet a line. I enjoy using a 4.5 foot "long rod" with 2 lb. test line fed through the blank. These rods are great because you can comfortably stand or kneel by holes and it is easy to move your jig a few feet in the water column with only a bend of the wrist. I also find the fight to be much more fun on these rods than on traditional ice fishing outfits. In relatively clear water the presentation I prefer is either a purple or black teardrop shaped jig tipped with a purple MEAT Panfish Leech. Panfish Leeches are soaked in livebait juices and cut from pure pork fat which results in unmatched scent dispersion, texture and undulating action. MEAT stays on the hook better than spikes or wax worms and I have honestly not put live bait on my ice jig since I first used MEAT last winter. MEAT Panfish Leeches come in six color varieties so I can "match the hatch" without tying on a new jig if my go-to color isn't getting it done. Another advantage using MEAT is that it is easily customizable - you can use it whole or pinch it off at the segment into two pieces, one is the size of a spike and the other a wax worm. 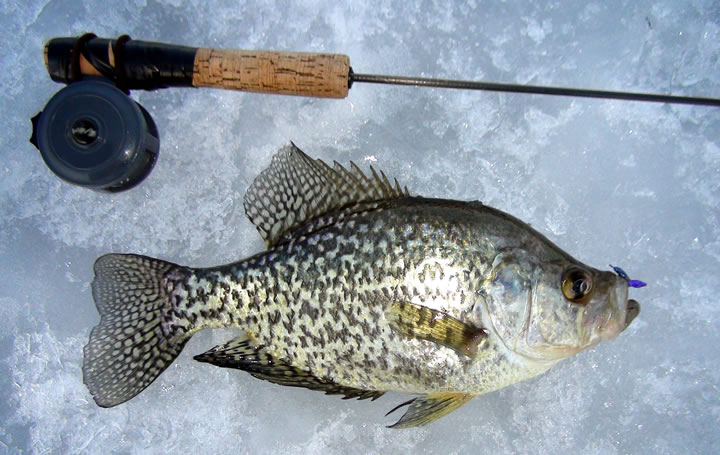 When it comes to jigging technique, I begin with a slow measured drop onto where I saw fish in the water column with the camera. If I don't catch a fish on this gradual fall, then I begin slowly jigging up from the bottom to a height of about three feet and then repeat the measured drop. In a perfect world, the holes that I actually put a line down have a half dozen or more fish viewed on the camera and I can usually catch four or five before it is time to move on to the next hole where I saw fish. Usually the slow fall entices fish into biting, but as the school diminishes from me pulling them through the ice, slowly jigging up will catch the less aggressive fish. Before leaving a hole for greener pastures my last resort is to violently shake the jig about six inches off the bottom and then completely stop the bait. If I don't get bit in about five seconds I go on to the next hole where I saw fish on the Aqua-Vu.

Be sure to get out on the ice a few more times before it is gone this winter and enjoy the panfishing bonanza that occurs during late ice. Catching numerous giant panfish is a blast but think safety first-fish with a partner and be sure to pack a rope, icepicks, and wear a self-inflating lifejacket under your coat. Ice is weakest near shore but is usually considerably thicker only a few yards out (I have even worn waders to get from shore out onto safe ice). Try the outlined techniques and make some room in your freezer before you go!

Dave Lorier
Dave Lorier lives in Oconomowoc and has been hunting and fishing in Wisconsin since his childhood. Dave earned his degree in wildlife ecology from UW Madison and then went on to work for the Wisconsin Department of Natural Resources in Fisheries Research and Management. Presently Lorier is a high school science instructor and also teaches youth outdoor education courses. Dave enjoys all types of fishing and hunting, especially competitive bass fishing, bow hunting, and ice fishing for bluegills.
BITS & BITES
Advertise here
Advertise here
Please take a moment to visit our sponsors. Without them we would not be here.