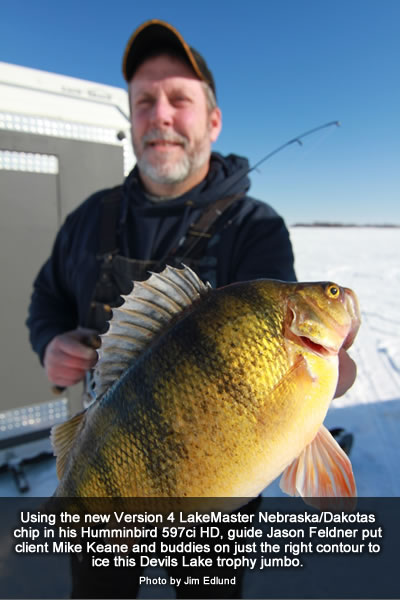 "When it comes to finding fish, you've gotta key in on slight 1-foot depth contours-especially for perch. In mid- and late-winter, a good place to start is that 8- to 15-foot range," says Feldner.

Like birds following a migration path, perch slowly travel specific depth contours from mid-winter through late ice to reach their spring spawning areas. "If you can't get right on those one-foot contours and follow the perch, you're gonna have a tough time staying on the action," says Feldner.

But to get the contour right, sink an Aqua-Vu camera, and you'll spy a stockyard of yellow, green and black bars moving amidst swarms of shrimp. "That's what I try to put my clients on. You look down there and it's like hordes of Green Bay fans moving out of the stadium and into the streets. They're hungry and looking for a fight."

"Once I find the contour the perch are following, I simply choose the chart menu in my 597 and highlight that key depth contour in green. Now, with a glance, I know where the money areas are and simply drill my holes throughout that green shaded area on the graph."

Pull up the new Version 4 LakeMaster card and anglers will immediately notice that Devils Lake is set to its current elevation of 1455 feet, which means areas that have recently flooded and are underwater show up as water on the map. But even if that changes, Feldner can readjust the depths on the map with the press of a button. Water's down three feet? Simply set Water Level Offset to -3 feet.

He also adds that fishing Devils Lake without accurate GPS mapping can quickly get anglers in trouble, as the lake is a mine field of barely submerged roadbeds, timber fields, and other structure that can wreck the lower units of the unsuspecting or overzealous. And in the winter, it's crucial to set a route and be able to follow it back into shore if the wind picks up and anglers face whiteout conditions.

Following the waterfowl analogy, once he's located schools of jumbos, Feldner likes to use a 'three call' system to lure the traveling butterballs into biting.

Feldner starts his three-call system with the perch equivalent of a hail or highball call-a ¼-ounce Lindy Darter or Rattlin' Flyer-a bait with a big profile and sizeable rattle chamber to produce sonics that alert perch to the presence of food.

"Perch are inquisitive," says Feldner. "They'll swim over from a pretty good distance to investigate what's making the racket-and if it's something they can eat."

Because Devils Lake perch typically relate to the bottom, Feldner likes to position his bait two- to three-feet off the bottom so the fish can see it from a distance. He'll give it a pump followed by a shimmy and shake to produce flash and noise before letting it sit, keeping his eyes glued to the screen of his Humminbird 597 graph.

"I try to appeal to all their senses. You've got the rattle, the flash, and then I tip it with a minnowhead-just the head, no guts-to produce some scent," says Feldner.

In terms of gear, Feldner tells his clients to leave their 1- and 2-pound panfish finesse rigs at home. "These fish are head throbbers and are routinely in that 13- to 15-inch range, sometimes bigger. They're linebackers that'll beat up puny rigs. Plus, you stand a good chance at a good-sized walleye that follow perch around. One of my clients just iced an 11-pounder fishing this perch system."

"The swivel keeps the line from twisting and eliminates having to use fancy line-to-leader knots. Hard to beat the strength of tying direct to metal," says Feldner.

To speed up the process of swapping out different sizes and colors of Darters and Rattlin' Flyers, Felder likes Quick Snaps, rather than having to re-tie. "If I get a couple lookers at the ¼-ounce but no takers, I'll quickly downsize in the same spoon to a 1/8-ounce,"he says.

And if they won't commit to the 1/8-ounce - or if the fish slow down - Feldner abandons the highball and moves to the "C'mon In Call."

The C'mon In Call

With the attention of the perch stockyard now in Feldner's transducer cone, he'll switch out the minnowhead and rattle spoon, opting for a Lindy Frosty and two red larvae on each of the treble arms in traditional "Medusa" fashion.

He then slows his jigging, finding out just how far the fish will come up for the bait. "Often times I'm just barely moving that rod tip and then letting it sit still. Then I'll slowly lift it up in the water column until I find out at what depth they want to feed," says Feldner.

Feldner finds that the 'C'mon Call' is typically good for a solid number of fish. Still, at some point the perch will go neutral, at which time he pulls out his feeding call.

Further downsizing to Lindy Toads and Ice Jigs presented on a Frabill Straight Line system to reduce unwanted jig spin, Feldner presents the bait like larvae emerging from the mud, gently tapping the bottom to produce clouds of silt which draw in feeding perch.

Yet, he says color can make a difference, too. "My experience is that on bright days, bright spoons and jigheads work best-on dark days, dark colors." 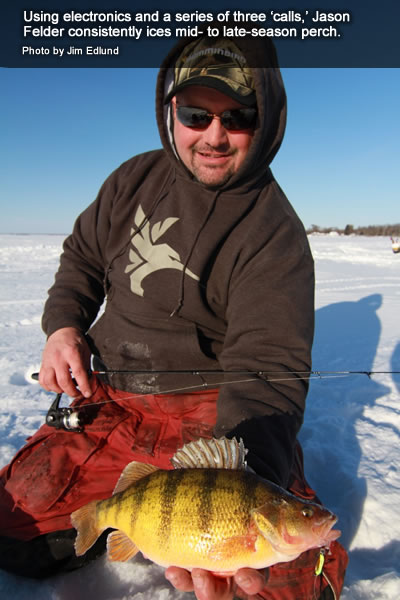 He recommends keeping a deadstick with a minnow in another hole off to the side, which will keep perch in the area until you figure out what presentation works best. Plus, you increase your chance at some of the awesome multi-species action Devils Lake has to offer-a gorgeous walleye, brawny pike or even a roaming white bass.

Although Feldner is well versed in how to use the latest in fishing electronics technology to his advantage, he still keeps an eye on Mother Nature to help him optimize his time on the ice.

"As snow geese start to migrate north in mid- to late-March throughout the Dakotas, that's when we're getting closest to ice-out, which definitely relates to what perch are doing. The water's warmer, there's run-off and perch are finally arriving in the shallower, sandy shorelines to spawn."

Feldner says this can be prime time for the biggest butterballs in the Devils Lake system, and says he'll fish as long as it's safe. "Not only are the perch massive," says Feldner, "the walleyes are moving to the edges of the trees and into shallower water, which means you can have epic multi-species days!"

Northeast North Dakota District Fisheries Supervisor Randy Hiltner says all surveys point to the perch and pike populations being the largest and healthiest they've been in 10 years. Likewise, walleye numbers are high, with excellent hatches the past five years. "All three major gamefish species are high in terms of density … it's a dogfight out there!" says Hiltner.

Thinking about a late-ice destination? No matter how you cut it, it's hard to beat Devils Lake.