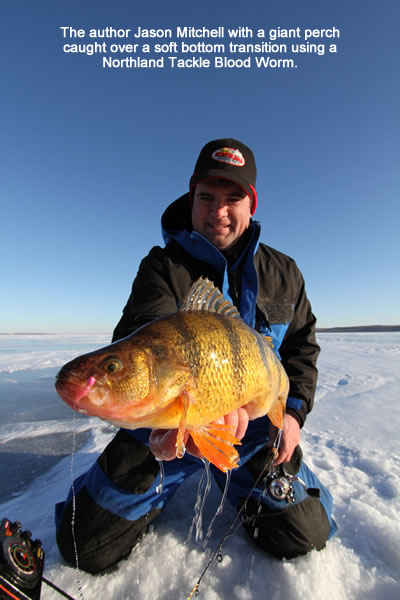 There is no silver bullet with late ice perch regarding location but make no mistake, some of the most impressive catches and fishing for the whole calendar year take place in march. Late ice is prime time for jumbo but the tactics and patterns can run the gamut.

On so many lakes, perch move relatively shallow and become more aggressive as the ice rots. Large sand flats or gently sloping flats that have chara and sand grass often hold fish during late ice particularly if these locations are near the mouths of bays and other shallow water that where these fish will eventually spawn.

These shallow flat patterns are classic on lakes like Leech Lake or Winnie in Northern Minnesota. In the Dakota dish bowl lakes, perch often push up into bays but the transitions where sand or gravel turns to mud is often the key. We have caught perch at late ice in three feet of water on Leech Lake in March and fifty three feet of water at late ice on Devils Lake however so not all fish are shallow. Each lake, each fishery has its own personality. So fish position themselves in relation to where they will eventually spawn but forage is still the trump card that still influences where fish are found.

While there are so many solid shallow water bites for perch at late ice on many different fisheries, don't lock into the mindset that shallow patterns are the only patterns worth exploring. Late ice can often see a lot of invertebrate activity with bug larvae and blood worms and when fish are keying on bugs, you will typically notice a couple of things… first is that the fish get pink jaws and pink scales on the bellies from making contact with the bottom. The other thing that typically occurs with bug relating fish is that they are often deeper.

Reason being is that on some lakes, much of the invertebrate activity is happening over a soft bottom and on many lakes, that soft bottom occurs off the shoreline past the transition. Most lakes have a firmer or harder bottom closer to shore and as you push towards the basin, the bottom gets soft… soft bottoms are typically near the basin and thus deeper. Deep is relative. On Devils Lake, deep is more than thirty feet, on some of the Glacial Lakes in South Dakota or Nebraska, deep is twelve feet.

Bug patterns typically require more finesse but not always. When the fish are off, horizontal jigs like a Northland Tackle Hexi-Fly tipped with a wax worm or minnow head is a top lure. Another deadly jig for water up to about fifteen feet is a Northland Tackle blood worm which is a small jig tipped with a long eel shaped soft plastic tail. If you can get a Bloodworm down to the fish at a decent speed, these jigs are incredibly effective. With small horizontal jigs, use a rod that has a light enough tip to load slightly from the weight of these small jigs. One of the most effective rods for this style of presentation is the Jason Mitchell Elite Series Meat Stick.

Typically when fish are keying on invertebrates, the perch will go for a more subtle shake or pound that just causes the jig to shimmy and dance but there are situations where small spoons like a Forage Minnow really shines. On a high lift/ fall, if fish come up off the bottom and accelerate up to the lure fast… you are dealing with more aggressive fish and spoons shine. The reason being is that spoons call in fish from further away and are typically bigger and heavier where they drop back down through the water faster after catching a fish.

Another top lure option is to combine the calling and weight advantages with a spoon to subtleness of a dropper. Take your favorite Buckshot Rattle spoon and attach a small chain dropper below the spoon after removing the treble hook. You can also tie your own dropper out of a short six to eight inch piece of monofilament but I like the chain dropper best. Reason being is that the short chain dropper is very flexible and subtle which imparts a real deadly action on the hook and the fish can suck in the hook easier than when using a mono dropper which is actually stiffer than the chain.

One really effective tactic that can work really well in deeper water when using either spoons or spoons with droppers is to free fall the spoon fast enough to get the lure to swing out to the side of the hole and let the lure hit the mud. Than slowly drag the spoon across the bottom back towards the center of the hole. For perch that are tipping up sucking up invertebrates out of the mud, this technique will catch fish when nothing else works.

With bug patterns that take place in deeper water on transitions that are following lake basins, Prime locations are any indent or finger that makes this transition irregular and prime locations remain basins and flats that are either within bays that have a softer basin or adjacent next to larger shallow flats that have some protection and weed growth.

Does this deeper bug pattern happen on every lake? Absolutely not but it happens enough and is often overlooked. Same fish, different body of water and you might find fish keying on crayfish, shiners or some other type of minnow. Typically when fish are relating to minnows or crayfish, you are going to find shallower patterns and much more aggressive feeding behavior over sands or low lying weeds on big flats. A general rule of thumb is that shallower fish (less than ten feet of water) are typically more aggressive and these fish are often orientating more to crayfish and minnows. Deeper fish are typically less aggressive and orientating towards bug hatches and invertebrates.

Which pattern to pursue depends on the process of elimination. Check the traditional shallow sand locations and if the bite is on, enjoy. If the bite is not there however or sporadic, don't be afraid to look deeper at late ice against popular opinion because there are certain situations where these bug brained perch patterns not only produce solid fishing opportunities but big fish as well. Some of the heaviest female perch I have ever caught myself were caught at late ice over deeper soft basin transitions and this pattern should not be overlooked.