ATV's and Ice Fishing - Don't Let Anything Stand In Your Way

By Dennis Foster - February 1, 2013
We are now living in an era where mechanization and technology continue to escalate at an amazing pace and it seems nearly impossible to keep up with everything being presented to us. As gritty and quite accurately down to earth as the outdoor world is for those of us who choose to enjoy it, every bit of slick new techno wonder has managed to find its way into our formerly somewhat small and confined world.

GPS, advances in Sonar and the combination thereof with the advent of background mapping quickly come to mind. Video is not a game anymore as is evidenced by its increasing use above and below water. It's more than just a little exciting to get an up close and personal look at our quarry whether is sports horns or fins. Advances in clothing make being outside in virtually any kind of weather not only possible-even comfortable-in all but the most extreme conditions. The list goes on and on. This is not a bad thing, mind you, just progress. We had just as well embrace as much of it as we can or our wallets allow us to.

For the sake of this article I will focus on just how far we have come concerning transportation for those of us who take our fishing seriously. I'm talking hard water here folks and the topic of boats is best left for another day. This is where the advent of ATV's has literally opened up many previously all but inaccessible locations in which to pursue the immensely popular and fastest growing of all outdoor sports. There is a stark contrast from modern ice fisherman and our counterparts of just a few decades ago…about the only thing that has remained constant is that we are fishing through a hole in the ice. 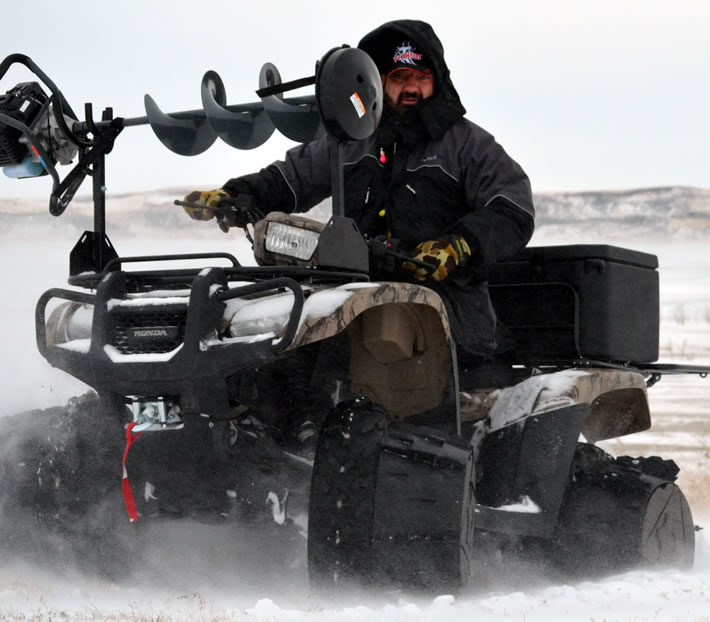 With absolutely no exaggeration; ATV's have literally opened up every inch on any body of water in which we want to fish and have vastly broadened our horizons. If we can safely walk on it, there is an ATV that will not only get us to our destination, but also do so with relative ease and comfort. 4-Wheelers quickly come to mind as the most versatile, cost efficient, and by far the most used. We now have access to locations that were previously off limits due to either sheer distance or inhospitable ice or snow conditions. No sense burying your pickup or even worse sending it and most likely yourself to the bottom of the lake now that we have much better options.

The best part of this is that while we all appreciate the utilitarian aspects of owning an ATV; bottom line is that they are just flat out fun to run across most anything that stands between us and our ultimate destination. The little boy (or girl) in us who craves toy's is part of the equation no matter how old we get or care to admit… the practicality of these units just helps to rationalize the decision to own them.

There are many brands of 4-wheelers in which to choose from and quite frankly, most of them are pretty good. While one make may have a bell or whistle that another may or may not have; for us as Sportsman frills are not what cuts it. Rugged dependability is what does. The extra cool graphics might look great under the complimentary lights of the salesroom, but that kind of stuff does us absolutely no good if the pretty machine won't start or breaks down when we are miles from home on a windblown sheet of ice.

This is why is personally choose to go with the Foreman model from Honda as the reliability is legendary. I depend on the power coupled with a transmission you can count on whether running and gunning while scouting or under heavy duty use such as pulling out my fully equipped wheeled Custom Cottage ice house to sit on top of the fish in ultimate comfort and style once I have them found and dialed in. You see, I personally prefer to fish rather than struggle with equipment. Electronic fuel injection insures quick and sure fire starting no matter how cold it is and power steering, although not essential, is a much appreciated feature on any model.

As good as a stock ATV is, as with most equipment, there are ways to personalize them and trick them out in order to make your life just a little bit more uncomplicated. Besides, you can build back in some of the cool factor while remaining practical. Probably the most notable innovations as of late are traction enhancement systems. Most noticeable are tracks. While they work great and extend the usefulness of any units sporting them, they are also prohibitively expensive and from what I am being told, hard on transmissions and final drive's. They also limit top end speed and are something that you most likely will not want to run on your unit year round. Thus, they can be not only a pain in the wallet, but also the general area where you keep your wallet.

There is a more viable solution in my mind and instead of costing thousands, you can outfit your rig for mere hundreds of dollars by going with a set of J-Wheelz. They basically amount to a surprisingly durable foam filled plastic wheel extension with paddles providing the extra traction. So we can not only go through snow that a standard machine couldn't even dream of, we also have an added safety feature in that a set of 4 provides us with an extra 310 pounds worth of flotation and will fully float many stock machines. I personally would not be here to tell you about them had they not saved my sorry butt from a very ill advised attempt at crossing the channel on Lake Oahe a couple of seasons ago.

Another feature that is much appreciated in addition to only weighing 7 pounds a piece is the fact that you can easily run wide open with them with no effect on steering whatsoever. Even though you can install or remove them in mere minutes there is really no reason to ever do so. The traction is always there waiting for you…whether needed or not.

Another accessory that I would consider standard is auger and storage options. Johnson's Cargo Systems offers more than a standard cradle for your auger in that their version has a support system for the head along with securing straps that allow you to travel at reasonable speeds over the roughest of ice conditions. They also offer a rear rack extension that greatly expands the usable area and lets us take along everything we could ever need. Throw in some handy bucket holders and you are all set.

Windshields, winches, and the like just round out your package and you can have a fully dedicated, functional, and organized ice fishing system at the ready. You wouldn't think of running your boat without a trolling motor, rod holders, etc.; so why cut yourself short while on the ice?

Now for you super serious types; if you to want to go a step even further than this, there are specifically designed and purpose built machines made just for ice fishing. I'll touch on them briefly and you will want to do a little research to learn the full details. Links can be found on my website www.eyetimepromotions.com.

The SnoBear quickly comes to mind. This is the hardcore ice addicts dream machine as it is basically a motorized track driven luxury fish house complete with every amenity imaginable. These things are incredible as they distribute the weight down to less than a pound per square inch while safely getting us through about anything Mother Nature can throw at us. Upon arrival they hydraulically lower themselves to the ice and you can promptly begin fishing while still in your t-shirt. It just does not get any better than this.

Another very interesting and unique option is the Wilcraft vehicle. After 15 years in development they may have just perfected the ultimate unit to help us extend our hardwater fishing season. You can get out earlier on thin ice and much later as the ice deteriorates as you can actually drive these things through open water. With a built in flip over style shelter, they give us the mobility factor that can be key to finding and staying on top of schools of active fish. Equipped them with a set of J-Wheelz and a camo top and they are just as useful in a slough waterfowl hunting as they are on the ice. Take some time and check out all of your options and you will no doubt find a viable solution for you and your style of fishing. With what we have available today, there really isn't anything left standing between you and the fish.