By Matt Bichanich - February 1, 2013
Ice fishing in late February and even later into March (where legal) is one of the best opportunities to catch giant northern pike. Northerns are one of the first gamefish to spawn and they begin to concentrate during late ice which greatly increases the odds of catching a wall hanger. Targeting a body of water known for big pike will improve your chances even further if catching a true behemoth is your goal. A couple of Wisconsin's larger destination lakes that produce huge fish year after year include Green Bay, Castle Rock Lake and Lake Poygan. You don't have to travel far if you live in southeast Wisconsin to get at big pike though - Delevan, Geneva, Big Muskego, and the Madison Chain are just a few of the quality pike fisheries in the area. When fishing any of these bodies of water, particularly the larger flowages, the key is to find shallow bays containing feeder creeks. Big female pike and their male counterparts seek these locations with two things on their mind - eating and spawning. Simply look at a detailed lake map to identify the bays where creeks and rivers flow into, or out of, the lake. Within each of these bays locate the deeper channel created by the creek as this is the main highway that pike travel from the main lake basin to their spawning grounds. 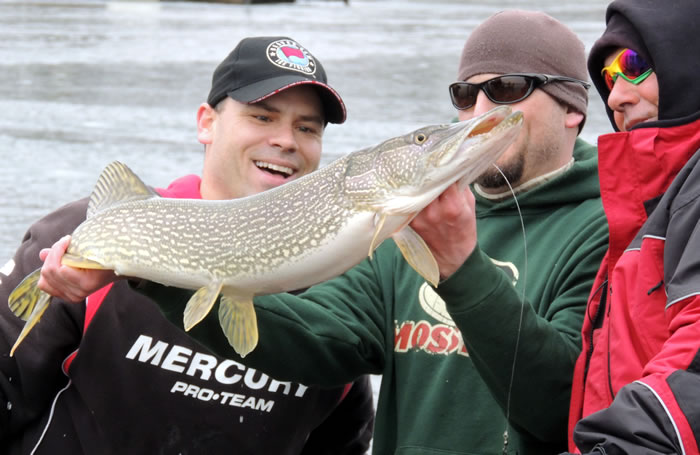 Once on the ice use your map and GPS to get in the vicinity of the deeper channels you previously identified and begin punching holes. Ice drill converters are great because they transform a cordless drill and hand auger into an easy to use drilling machine. This system is perfect because it allows you to pack light and cover more water. Additionally, drilling holes this way is extremely quiet and doesn't spook pike out of the shallows. Setup for this type of drilling system is easy; simply detach the handle from your hand auger and use the converter to attach the auger unit onto your cordless drill. Depending on the diameter of your auger, electric drill quality, and ice thickness, you can open more than thirty holes per battery. Obviously when targeting pike a larger diameter hole is a must, eight inch augers and extra batteries are standard gear for the task. Have one person man the drill and another follow behind with a locator/camera to identify holes situated over the channel where tip-ups will be set to ambush pike.

Monster pike on the line are notorious for putting up long fought battles and testing the limits of fishing gear. Beaver Dam tip-ups matched with the appropriate line and leader will get the job done on these giants whether they are aggressive or extremely wary. Beaver Dams contain a freeze-proof lubricant that results in drag-free spooling even in subzero temperatures as well as a tapered spin trigger, releasing the flag rod on even light bites (they also feature an anti-wind slot for breezy days to prevent false alarms). Pair your braided ice line with 60 lb. test fluorocarbon leaders to further increase catch rates - fluorocarbon is nearly invisible underwater and has the strength and abrasion resistance to handle toothy pike. Jumbo shiners hung a foot off the bottom or dead smelt sitting directly on the substrate are the go to baits this time of year. Live bait generally results in more flags but smelt seem to catch bigger fish. It certainly can't hurt to try both. There are even serious pike anglers that put hotdogs in their spread and swear they work even better than smelt or shiners. Some days the flash of an attractor like a metallic spinner blade above the hook or the scent of an oily strip of Uncle Josh MEAT hooked on with the shiner can even be the ticket. Don't be afraid to experiment when trying to trick giants that have already seen it all in their lifetime.

Be safe when heading out on these late season adventures. By this time of year we have usually had some warm spells that have started to thaw things out a bit. Carry a set of ice picks, pack a rope, and even consider wearing a life jacket. Remember that the best bays for catching the bruisers have current from an inflow which can quickly reduce ice thickness even though other parts of the lake are perfectly safe. Good fishing!

Matt Bichanich
Matt Bichanich guides in SE Wisconsin and is a regular guest on John Gillespies Waters and Woods. Matt enjoys competitive bass angling and fishes in both WABTA and the Cabela’s North American Bass Circuit
TRENDING DISCUSSIONS
Advertise here
Advertise here
Please take a moment to visit our sponsors. Without them we would not be here.