By Dan Small - February 1, 2013
Cottontail rabbits are among the most adaptable of all wild critters. In their effort to avoid predators and find enough to nibble on, they make themselves at home in some strange places.

I returned from a recent airline trip to find rabbit tracks in the snow that had blown all around my vehicle inside the parking garage at Milwaukee's Mitchell Airport. And who hasn't seen a bunny dash across a suburban backyard or hightail it into the landscaped shrubbery of their local bank? 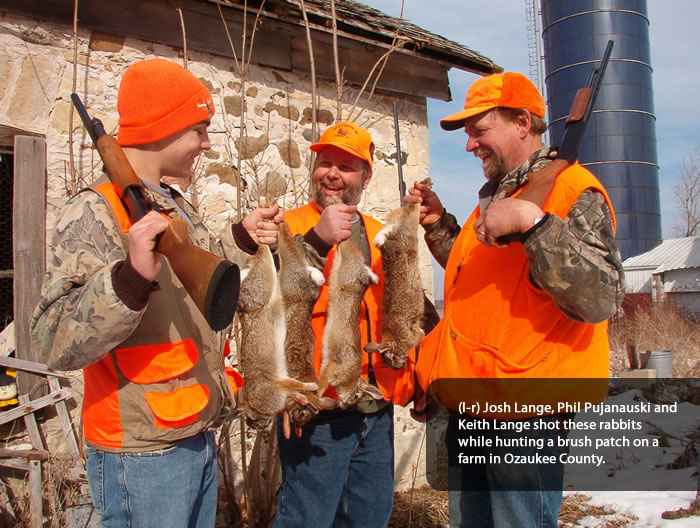 Those places are a bit too civilized to hunt, but if you look carefully, you'll find patches of huntable rabbit cover on the outskirts of small towns, around farms and generally on the fringes of civilization. Rabbit numbers tend to be higher in such places for two reasons. Small patches of dense cover concentrate bunnies, and the closer to farms, homes and businesses they live, the safer they are from the foxes, coyotes, hawks and owls that prey on them.

Now that the entire state is blanketed in snow, these little bits of rabbitat are much easier to see and hunt. You can spot many likely coverts simply by driving rural roads. Others, you'll find by asking around. Many farmers and rural landowners don't mind if you hunt rabbits, as long as they are confident you will shoot in a safe direction and not bother their livestock or pets.

One of my most memorable rabbit hunts took place 25 years ago on the grounds of a sportsmen's club in Winnebago County, where Jim Kalkofen and Dic Schultz took me and a camera crew for a TV hunt. Kalkofen put Schultz in an open spot between a narrow spruce grove and a small patch of brush. He put me near the end of the brush, 20 yards from a rickety shed.

"If they get past Dic, the rabbits will either hit the end of the brush and double back or else dive under the shed," Kalkofen said. He took a couple eager beagles, his Sam, and Schultz's Snoopy, to the other end of the spruce grove and turned them loose.

I stomped out a flat spot in the snow so I could turn if I had to and waited, thinking there was no way the rabbits would do as Kalkofen had said. 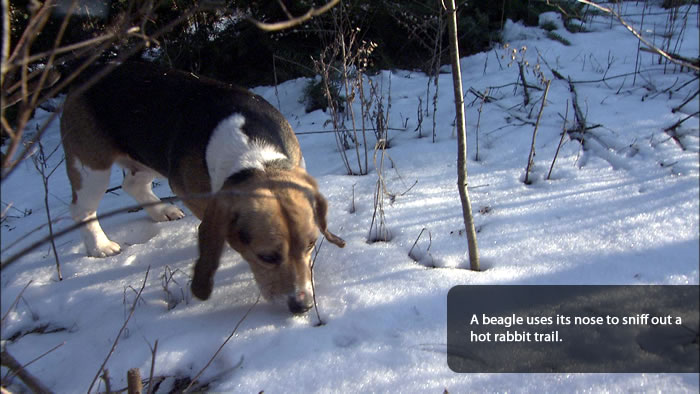 A minute or two after the hounds started baying, Schultz's .410 barked, and one rabbit kicked and lay still. A moment later, a second rabbit squirted across the opening and zipped under the corner of the shed before I could shoot. The next bunny took the same route, but I dropped it just before it reached the safety of the shed. A fourth rabbit ran to the end of the brush, doubled back away from me and made it back into the spruce grove. "You and Dic go to the other end of the spruce grove," Kalkofen said. "And I'll push back through with the dogs."

Schultz said rabbits often pop out of the corner of the spruce grove and cross a gravel lane into an oak wood lot. I stood 30 yards from the corner and put my videographer behind me. Sure enough, a bunny dashed out of the corner. I rolled him in the lane, and we caught the action on tape.

Kalkofen and Schultz had hunted that patch often enough to pattern the rabbits that lived there. You can find escape routes by trial and error, or you can scout a likely covert and look for well-worn trails in the snow. Sometimes the presence of buildings, fences or other obstacles will dictate where to place standers and which direction to drive the rabbits. When they can, rabbits prefer to circle back into cover, but they will sometimes run a short distance across an opening to reach another patch of cover.

Other little coverts I have hunted successfully include strips of brambles along railroad tracks, abandoned junkyards and brushy ditches that cross farm fields. Small coverts are not only easier to hunt than larger plots, they're almost a must if you hope to tape or photograph a hunt. Often, the smaller the better.

Several years ago, Keith Lange invited me, Judy Nugent and a camera crew to join him, his son Josh, and friend Phil Pujanauski to hunt several coverts in Ozaukee and Sheboygan counties. Lange ran three beagles that day, and we needed all of them. The first place we hunted was a frozen marshy wood lot loaded with rabbit sign. It covered only a few acres, but the bunnies had more escape routes than we could cover with five gunners. Nugent and Josh Lange shot one rabbit apiece in that spot, and several more eluded both guns and camera.

The second spot was a smaller patch behind a farmhouse and barn - a brushy hillside, sparsely planted to pines, with a narrow finger of brush that ran along a county road. Lange posted Nugent near the buildings at the top of the hill and the rest of us along the slope, then he took the dogs around to push the narrow finger back toward us. Later, we spread out and made a sweep behind the barn.

That spot held less sign than the first one, but it turned out to be twice as productive and a lot easier to hunt. In less than an hour, we bagged four more bunnies, several of which we caught on tape.

With my busy schedule, I don't get out after bunnies as often as I'd like to, but when I do you can bet your lucky rabbit's foot on one thing - instead of busting through large expanses of brush, I'll be looking for bunnies in little patches of cover.