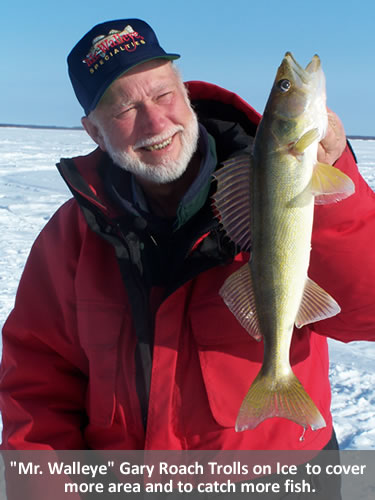 I was first introduced to trolling on ice by Tony Roach several years ago on Lake Mille Lacs in central Minnesota. Tony is an outstanding ice-angler and guide who works hard to get his clients on fish. Mille Lacs is a huge body of water with lots of places to catch walleyes and perch through the ice, but you've got to be on the fish to catch them. Trolling on the ice increases your odds of showing your bait to more fish, and the more fish that see your bait, the better your chance of getting bit.

When Tony hits the ice in the morning, he knows what area he wants to fish. With the help of a GPS and a mapping chip, he's able to see exactly where the bottom contours are. Then, keeping an eye on the map, he can drill holes along the edge of the drop-off or along or on any structure he wants to. After drilling some holes, he checks the depth of the area to make sure his holes are where he wants them to be. After confirming that the holes are where they should be, his anglers start fishing.

The series of holes is considered the "trolling pass". Once you get your trolling pass set up, it's just a matter of moving from hole to hole until you find a hot hole. Put the transducer for your sonar in the hole, drop a bait to the bottom, and watch for fish life. If you don't see something within five minutes, "troll" to the next hole.

A stop at the bait shop on your way to the lake is usually a good idea. Get some minnows or snacks or something and ask about hot baits. Try to get an idea what baits have been working the best.

Most anglers, when trolling on the ice, use a portable shelter for their "boat". The portables from Frabill are as good as it gets. They're comfortable to fish from, and they have lots of room so you can get plenty of equipment in them.

If you want to catch more fish this winter, try trolling on ice. Once you do, you'll see why this approach is so effective.