When the Walleyes Return 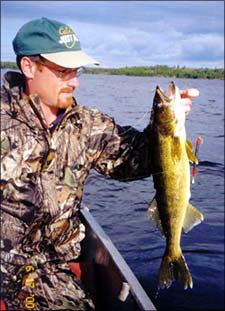 It seems like just about the time you establish a pattern, conditions change. Take springtime for instance, walleyes wrap up spawning and quickly switch focus to edibles. They flock to shallow structure where baitfish are easy to come by. Dial them in, and you're the man.

But as abruptly as the lake gods giveth, they taketh. Circumstances change. Water temperatures rise; baitfish vacate; and our glossy-eyed friends migrate to deeper structure. We're left frustrated with the challenge of divining new patterns in wilder places.

Autumn welcomes a rekindling. A cooling thermometer and shortened daylight hours summon baitfish and walleyes shallower, returning to where the season started. Shorelines are back in play - advantage, angler.

When pursuing fall walleyes on both natural lakes and reservoirs I key in on three primary venues: shoreline points, gravel or sand shoals - call them "bars" if you will - and tributaries. Each was thick with walleyes in the spring, and they will be again.

Shoreline Points
Points are nature's way of rounding critters up. Walleyes and a wealth of other species find the conditions quite inviting - good depth range, diversity of structure, ambush positions, cruising lanes, etc.

In the fall, especially early and mid autumn, giant, lazily tapering points generate the most traffic - save the steep breaking stuff for late fall. I like ones featuring a sizable crown, or flat area on top, and a couple of breaks leading down the tip and flanks, maybe five to ten-feet over the crest, covering acres of water, with a couple of major steps leading down to the basin - perfect.

During low light periods you can bet there'll be walleyes ravaging the top, and in a stiff breeze, fish will hold there all day long. Speaking of gales, wind beaten points outperform wind protected ones. Zooplankton and algae are bulldozed into the point, as are baitfish, which feed on the former, and eventually, walleyes arrive to capitalize on the situation.

Sand and Gravel Shoals
Second in line to points come shoals. Like a point, they protrude into the lake, offering walleyes a food shelf, as well as depth and structure options - bigger the better. Unlike points, shoals seldom offer visible shoreline clues as to their whereabouts, although they are commonly divulged on hydrological maps.

Again, onshore gales are beneficial, as are crosswinds, because they gather predators and prey. And the presence of rock is undoubtedly a bonus. The world's greatest walleye structures offer rocks of sundry sizes, including boulders and loose rubble, which create traceable edges, feeding options, and protective cover.

River and Creek Inlets
For walleyes, tributaries double as breeding grounds and food funnels. Springtime sees a blend of spawning and gorging, while autumn is solely reserved for filling up the gas tank. As autumn ensues, minnows progress back toward incoming currents, and walleyes soon follow. They are drawn to both diminutive feeder creeks and raging rivers, but for my money, bigger wins. The mouths of sizable flowages simply offer more options, subsequently holding more fish. In particular, I focus on the heart of the main channel; first couple of bends heading upstream; and the washout/shoal area, which typically forms at the mouth. River and creek mouths are often reachable from shore. Structures near the mouth but on the main lake, such as bars and rock reefs, also deserve attention.

Making them GO
So now you know where to look for autumn's walleyes. Let's move on to the catching.

It's evident that shallow-ranging walleyes aren't there for amusement, instead, it's a serious issue of minnow eating. Why not give them what they want?

You started the season with minnows and now it's time to complete the cycle with finned forage. Put the leeches and nightcrawlers away and procure a couple of scoops (you'll need 'em) of shiners, small suckers, or chubs, which fortunately, are more available than they were a few sultry weeks ago.

For fall rigging, I go to either a single hook and short snell or slightly longer spinner rig. My basic live bait rig consists of a three to four foot snell - 8-lb. Berkley Vanish does a fine job - with a live bait hook and red bead or colored #6 hook (red or orange), usually a Gamakatsu.

The spinner package, which I work exceedingly slow, is built with a four to five foot snell, spinner blade, five beads, float, and a #6 single hook - a float keeps the business end up. Profitable blade colors vary, but it's tough to beat lime green/chartreuse and hammered gold.

Either option can be drifted or trolled, slowly, as long as they're weighted properly. And this leads to a discussion of weights, or as they're more commonly known, sinkers. Gunning walleyes in snaggy rocks and rough shallows can be a chore, but not with the Foam Walker (a new concept in weighting). The Foam Walker's unique marriage of foam and lead keeps the rig standing upright, away from cracks and crevices, allowing your minnow to swim freely even when standing motionless. There's no better means for keeping a minnow in the strike zone.

The final item I'll touch on is boat control. He with the best control wins. Learn how to backtroll, as well as drift under command, and use a drift sock if winds and swells warrant. Too many live bait riggers fish far too fast, even with spinners.

The time you spent locating walleyes this spring is about to payoff again. Think shallow, think windswept, think minnows, and you'll be on top of walleyes when the leaves turn.