Our Dad Took Us Fishing

By Brian Athern - April 1, 2001
The Klein brothers ascended our stairs with dad's long lost, green Coleman cooler. The suspense was killing me. What did they bring 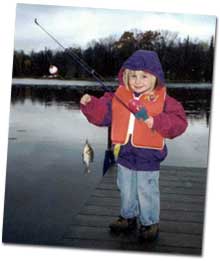 back!? The drama ended uneventfully with melted ice and canned pop being salvaged. "No keepers in there?" I asked. "Nope" Tom Klein responded. The trip began as a quest to become outdoorsmen, the first fishing trip with the men for my brother and me. Our dad said "You boys can't go fishing without your poles". My brother and I were both stupified. "We don't have fishing poles" bounced around our heads though we dared not utter those words and make dad look bad. Dad reached in the front hall closet as if he'd read our minds, "You better take these then!" he boasted. We were both elated and speechless. Our faces were glowing with excitement and anticipation as Pop jerked those two Zebco 404 combos out of the package. He paused only to write our names on the handle in black marker-"Pat" on one, "Brian" on the other. All we needed was a place to go, somewhere to wet the line to complete the circle of this outdoors baptism.

That's when Tom and Jerry Klein arrived on the scene. "You guys ready?" shouted Jerry. "I just need a hand with the cooler" Pops uttered in a loud whisper. I remember telling myself, "Guys-he said guys! Not Brian and the kids, but guys!" We loaded up our Torino wagon and the Kleins' in their Caprice for a fishing trip! Somehow, we had gotten lost in the fog that morning and separated from our companions just blocks from our house. Dad didn't panic, he just stopped at a closer lake than they had arranged. It didn't seem to matter to our father that it wasn't the Rusty Anchor Marina where we'd originally planned to fish together. We picked up some worms and sat on this dock, all the while taking in the whole fishing experience with the sunrise and ducks. Pop didn't fish a whole lot, instead choosing to rebait our rigs and being our supervisor. I can't recall catching any huge fish that morning but that didn't seem to matter, either as we managed some bluegills. 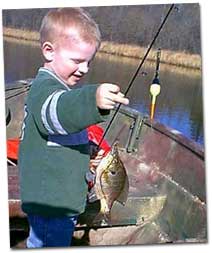 We returned with Dad in the wagon sometime in the early afternoon to await the return of the "great fishermen". Dad told us stories about them as if they'd been TV fishing show hosts who caught fish by the boat. We almost knew Tom and Jerry would return with the "big catch". They returned shortly thereafter. Pat and I tried not to appear disappointed by the lack of fish in the Coleman. Tom snatched a few cold pops for us and some big boys pops from the cooler and they proceeded to tag-team us with stories about the one that got away. In a way I was glad we didn't go with them because I was 8 and had vivid memories(and nightmares) about Jaws! They told us stories from their famed quests to Wisconsin in search of musky, pike, and walleyes. These adventures included shore lunches of fresh perch and walleye with fried potatoes and beans. I knew that's what fishing was suppose to be like-the Northwoods, fresh eats, and the outdoors! It gave me goose pimples when I heard it.

Looking back on it all, I need to say thanks to the Kleins and to my Dad for taking us fishing. Our initiation into the outdoors couldn't have been more memorable with adventure, suspense, and fish that kept us busy. I wouldn't trade that fishing trip for the world!

Brian Athern
Brian J. Athern is a Field Editor with MidWest Outdoors Magazine, Fishing Facts Magazine and has also worked with the former www.thesuburbanangler.com. If you have any questions or comments regarding this article you can email Brian at [email protected]
BITS & BITES
Advertise here
Advertise here
Please take a moment to visit our sponsors. Without them we would not be here.