Minimize the Effect of Auger Noise 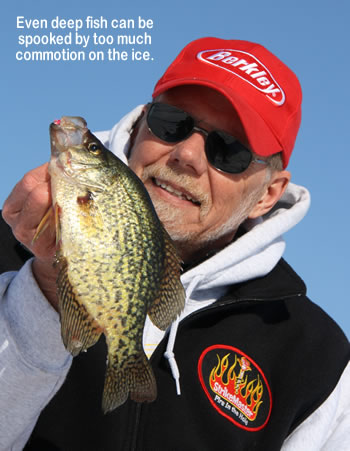 Even though I had my back to the approaching vehicle, I could hear it coming while it was still a quarter mile away. It wasn't that the muffler was bad or the engine was revved, it was the ice moaning and groaning from the weight that was the clue.

I watched the fish on my Vexilar, hoping I could get one more on the ice before the inevitable was going to happen. Unfortunately, I didn't get it done before my screen went blank. The fish I had going vanished as the vehicle approached.

This had been the third time in an hour I had lost contact with the suspended crappie. Even though I was working more than 20 feet of water, the fish spooked every time a vehicle came my way. They simply would not tolerate the surface commotion created by vehicle traffic.

Once the truck moved off into the distance, I began the search process all over again. With Vexilar in hand and transducer dangling, I hopped from hole to hole in an effort to relocate the spooked school of fish. Thanks to having drilled out a couple of dozen holes earlier, I did eventually catch up with the roaming crappie and sent a Hexi Fly and maggots down to finish catching supper.

The effect that surface noise has on fish under the ice has always been a bit of a mystery to me. It seems like one day they react to any type of disturbance and the next day, they could care less.

It isn't like they don't have opportunities to adjust to noise in the water as the ice booms all on its own. Yet, there are times when just walking on the ice seems to rile them up and get them nervous.

Because I am never quite sure what to expect, I have some personal noise rules I live by that seem to help. These rules start with how I look for fish.

I am a lazy kind of guy and don't really like drilling unnecessary holes. Because of this, I do as much searching for fish as possible before I start the auger. This can be accomplished by kicking away the snow and pouring a little water on the ice to create a good contact for the transducer.

Once I do find fish or an area I wish to explore more, I don't drill just one hole. Cutting a hole directly above fish seems to be the best way I know of to scatter the school. If I find something of interest, I will cut eight to twelve holes in the vicinity in hopes of having the spooked fish show up in at least one of the holes.

This may seem like a lot of work, but I would rather get all of the surface commotion out of the way in one shot instead of starting and stopping the auger every time I want to look in another location. Besides, with the quality of today's augers, drilling a dozen holes is not difficult.

Depth does play a role in the spookiness of fish. The deeper the water, the more they tolerate. Weeds also work to the advantage of the angler. If fish feel secure because of a weedy environment in which to hide, they will not spook as easily.

Regardless of whether I am fishing deep, shallow or somewhere in-between, this process of opening up lots of holes in the area I want to fish has paid dividends over the years. Yes, there are days when you could explode a bomb on the ice and not phase the fish at all. However, I usually find that is not the case.

Since I never know the mood of the fish before I start the auger, I like to play it safe and continue with the practice of giving my auger a work out before grabbing the rod and reel. Once the holes are cut and things quiet down, I can concentrate on catching fish.