Hook, Line and NO Sinker

By Jim Hudson - December 1, 2012
You know that age old comedic saying - "I got ya, Hook, Line and Sinker". Been around for years. Anglers always perpetrate their buddies into a punch line of a joke or story they are playing out, ending it with "giving them" the finale of a ribbing that only a fisherman can give. Same goes on the ice. Lots of ice anglers rig up just as the saying goes, and then carry on to fool their finned quarry. Works, yup? Always the best way? Nope, in actuality, this story is actually best played out without the sinker.

When talking about bite detection while jigging for any fish we are going to pursue through the ice, feel is the ultimate tool for success. But, this is not the feel that most are accustom to when thinking about the typical ice fishing scenario. Most think that they feel the bite as their rod bends to the weight of the fish. But, this scenario is seconds after the fish first engulfed your bait. The fish now has turned and moved away, allowing you to feel its weight. Now, in true terms of jigging, bite detection is actually when you feel nothing at all. Yup, that's correct, no weight. 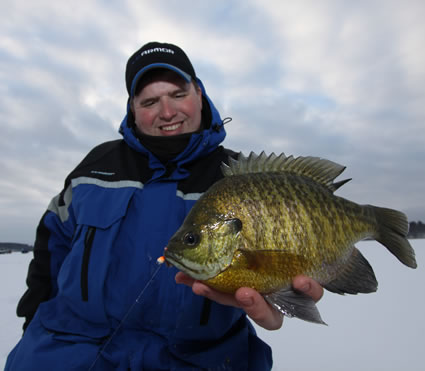 This all revolves around a term ice fishing legend, Dave Genz, coined - "the pound". Genz, through years of time of the ice, found that if he matched his rod type to the right pound test of line to the size jig he was using for the type of fish he was after while keeping a steady motion on his lure while jigging, he could always detect a bite far more superior than if something in this system was over powered by another. In simple terms, use bluegill gear for bluegills and walleye gear for walleyes. Do not use a heavy or medium action rod with 6lb test to present a small bluegill jig. You will never feel the jig and in turn never know you have a bite, unless your pole bends from the weight of the fish. Another way to look at it; when you have a lure on your line and you send down the hole and your line has coils in it because the lure is not heavy enough to take out those coils, making you put a sinker on to help straighten out the coils, you still will have problems detecting the bite in a split second fashion.

And where we see the sinker method most commonly used is when folks are targeting Pan Fish. Be it Crappies suspended over the basin, Bluegills that will only bite ant sized jigs or Perch roaming the deep flats of any given lake. And in those scenarios, I am willing to bet, folks are missing tons of strikes, due to light bites from neutral fish. But, if the sinker was eliminated, those same fish that you seen on your electronics and thought were non-biters, would magically turn to biters, because of your new way of bite detection. And in these instances, instead of sinkers, one can replace that weight with "heavier" jigs and more "sensitive" rods. And now, with the advent on tungsten jigs and specie specific ice rods, detecting the bite has never been easier.

Tungsten, this is where the "heavier" factor comes into play. Tungsten is much more dense than lead, allowing lure manufacturers produced jigs of the same size as lead counterparts that are heavier. Also, this correlates to lures that are much smaller, but, still as heavy as lead lures. In fishing talk, this allows us to take a 1/16 ounce tungsten jig and catch crappies suspended 20 feet down over 40 feet of water. Where those same crappies would not look at a similar 1/16 ounce lead jig, because it had too big of a profile. Thus, you would have to downsize to a 1/32 or maybe even a 1/64 lead jig. Now, even with 2lb test and a sensitive rod, you might not be able to feel the weight of those jigs, having you to put on a sinker. So, tungsten can be king, especially in scenarios when you need to downsize to catch fish.

But, we still have "sensitive" to play with as well. Even if tungsten is not in your arsenal, having the right rod and accessories attached, can play a huge role in keeping the sinkers off the line. Let's look at having to use smaller lures for finicky bluegills. At times, these fish can be so size and type sensitive, you may have to scale down to a 1/32 weight. Mainly, we see this in very clear water and the fish are shallow or when they are experiencing a lot of pressure from anglers. In these scenarios, when you do have to dip down to the tiniest of lures, even in tungsten, this is getting to the point that you need an addition to your rod to help detect a bite. Time to reach for a spring bobber. Springs have been around for years and come in many shapes and forms. But, all are made for the same reason - early bite detection. As you jig in cadence, the spring bows to the weight of the jig, and as soon as that cadence is interrupted by the strike of a fish, that bow either decreases or increases from the pressure of the fish. Now, in most instances, the bow in the spring almost always decreases before increases, and this is especially true on light bites we see from fish that we have to use these techniques for in the first place.

Also, in terms of "sensitive", I find that using a more sensitive line helps as well. Turning to a superline, which a lot are now made specifically for ice fishing, helps in this no feel game - big time. Some of these lines are so thin, they look almost microscopic or thread like, and even though they are that thin, they still have great pound test breaking strength, allowing you to present the smallest of baits in the deepest of water with confidence you won't get broken off. But, most importantly, they allow you to feel the weight of your bait as you jig and keep proper balance without the addition of a sinker. Do take note that if you want to use these superlines it might limit you to fishing inside a shelter most days. They are prone to freeze-up, and when talking super thin, it can create a huge problem.

So, hopefully these little tips and tricks will help you out this ice season. As we all know, we do not like to be on the receiving end of a joke, especially when it's the fish having the last laugh!

Jim Hudson
Jim Hudson is a fully licensed guide and USCG captain born in Northern Wisconsin. Jim is a college graduate in the field of natural resources and has dedicated himself in the conservation of our natural resources and the sport of fishing. All of this has allowed Jim to become a trusted face in the fishing community, where he is a regular guest on John Gillespies Water and Woods, The Next Bite, Northland Adventures, Butch Furtman's Sportsman's Journal, featured in many of the top fishing publications, and is a pro-staffer and product consultant for many of the top fishing related companies that lead the way for the modern angler.
BITS & BITES
Advertise here
Advertise here
Please take a moment to visit our sponsors. Without them we would not be here.