By Jerry Carlson - December 1, 2012
It was the last day of our Arkansas snow goose hunting adventure with Goose and Duck Smackers Guide Service. The early morning rain that had been promised by the weatherman had not yet arrived. However, the leading edge of the clouds was present making for a spectacular red and orange sunrise.

As the guides finished the last minute preparations in the decoy spread, our group of hunters readied our blinds and prepared ourselves for whatever the day would bring. For the previous three mornings, the early flight had been memorable and we were hoping for more of the same on day four. 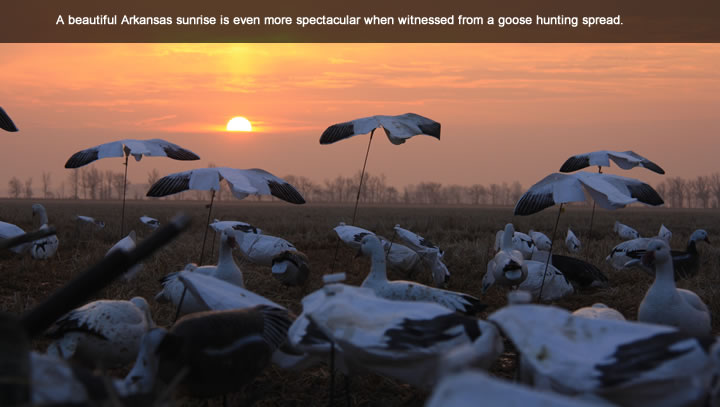 Although the cloud cover helped attract some flocks to our spread, the total lack of wind made finishing these birds difficult. After a few high passes, the game was up and they moved on to other locations.

We all saw the large group of birds approaching us from our right. They were unusually low and at first we figured they were specs. As they closed the gap it became apparent they were snows and we readied ourselves for the upcoming opportunity.

Thanks to the experienced guides that set the decoys, these birds centered perfectly and came over our party at 35 yards. When the shot was called, there was no shortage of targets and birds started dropping in earnest.

When the dog finally found the last goose, we had a total of eight birds for our first volley. That was definitely a good start to the day.

Arkansas snow goose hunting was a new experience for our group. Instead of waiting for the migration flight in Missouri and South Dakota, we opted to travel south to where many of the birds winter and the initial staging for their trek north takes place.

According to Brian Cahalan, owner of the guide service, being able to hunt the staging areas in February meant more opportunities for juvenile birds. Juvenile birds are much less wary than adults and often make up the bulk of the hunter harvest. That was certainly the case with our crew as the young birds accounted for more than 50 percent of our take.

Although there were many memorable aspects of our hunting trip, the lodge life was a hit with everybody. Being able to share accommodations with the guides and other hunters gave us the opportunity to tell stories and relax in comfort. Not having to cook or go out for meals was also a huge bonus. 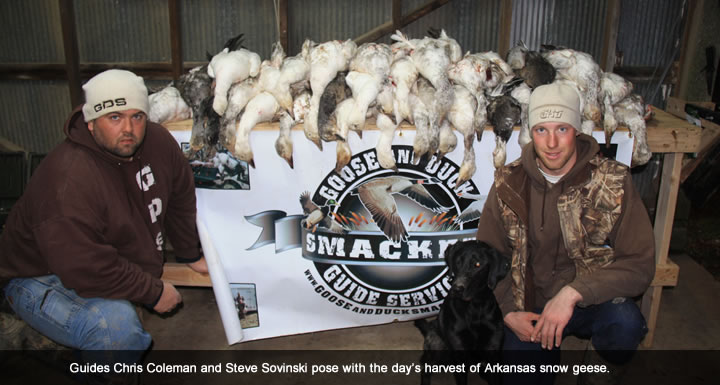 Even though I have been involved with many snow goose hunts, I continue to find the outings extremely enjoyable. The unique way snow geese approach the spread from above makes this style of hunting a very visual experience.

Snow geese are rarely in a hurry to set down in a spread. Instead, they will circle high above the decoys and only come lower if they see something they like. Many times the adult birds will make a dozen passes before they decide what they want to do.

Hunters will also witness large flocks of a thousand or more birds working their way north. These high flyers are not interested in eating and won't miss a wing beat as they pass over your spread. However, they are still a thrill to see.

The spring snow goose experience is very unique. It is an opportunity to witness incredible numbers of birds as they move to their summer nesting grounds in the far reaches of Canada. It is also an opportunity to participate in the Conservation Order that is designed to reduce the overall population.