By Jason Mitchell - December 1, 2012
When you watch fish on an underwater camera, you can usually tell if that fish is going to eat just by how the fish is postured. Let's take walleyes for example, walleyes that are in attack mode typically have a different posture… the fins are up and the back is arched. All fish including bluegills and crappie have that posture where they mean business. The fish are cruising and alert. These are the fish that make us look good as anglers and there are often key windows through the day where you get this activity. On the flip side, the fish that are not cruising that have their fins tucked tight to the body are much more difficult to catch. 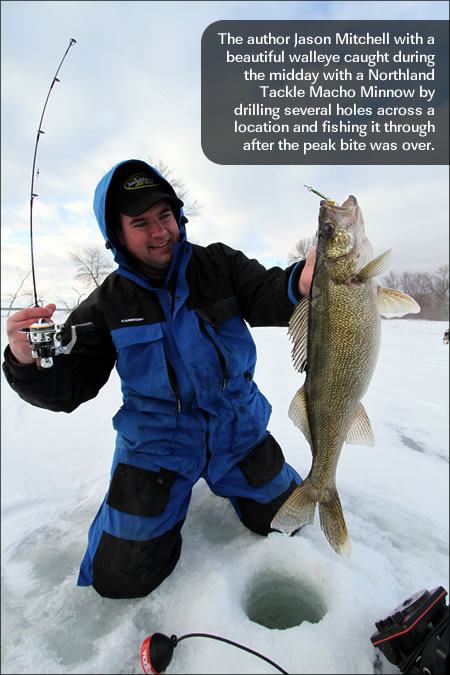 Not very often, but every once in a while I have observed mass migrations of fish where schools of fish moved through about the speed of a slow walk with tucked in fins. These fish appeared to be traveling from point A to point B and were interested in nothing as a trigger. It felt like I was fishing with something that was invisible no matter what I tried. Than, out of the hundreds of fish that swam through, one fish came by with a different more alert body posture and struck the lure. So there are times when moving fish are not aggressive fish and I can only guess that some environmental trigger causes fish to make a big move where they just don't stop to eat. Most of the time however, the fish that are cruising have the attitude to eat, alert and ready.

Understanding this posture and understanding what triggers fish to move should play a major role in your strategy as an ice angler. This is why a Vexilar is so crucial to success on the ice. No other electronics give you the intimacy of that raw analog signal that lets you visualize the posture of the fish. Typically, there are windows of activity that often center on sunrise and sunset where fish just roam more with that aggressive posture. Now consider this, fish that are moving are much easier to catch with much less effort. The reason being is that the fish come to you. If you are set up where these fish are going to move through, they come below you and just as importantly, after you catch a few fish from a school, a new school swims in to replace the fish that swam off.

Take walleye fishing during the prime time witching hours of sunrise and sunset on so many lakes. At that period of time, you can be set up on a good spot and fish will move through. After that period is over, fish quit roaming and you quit seeing fish because no new fish are coming in. Same thing can happen with bluegills where fish are straying away from weeds and roaming through edges and troughs but as the sun gets higher, they quit cruising and start to tuck into the weeds.

During the prime windows, you can find fish much easier because you can cover a lot more water just because you don't have to drill so many holes to see if any fish are around. Pick any spot and pick out the key locations on that spot. You don't have to drill many holes just to see if anybody is home. When I am looking for walleyes during the early morning or evening hours for example, I can drill a handful of holes on the prime inside turns, fingers and the top of the structure and know in a short while if there are fish around and my mindset is to make big moves and check as many spots as possible during that window. I don't move five yards at a time or drill holes all over the place. Surgically check the prime locations and jig aggressively to pull fish in.

Remember this however, big moves might find fish but small moves catch fish. When you find fish by sampling as many spots as possible, you are going to typically catch fish during the prime windows by sitting on the key spots and fishing the traffic that is swimming through. Once this ends, you have to fish a spot through. Now is the time to shred up the ice with a lot of holes. Drilling a lot of holes through an area at this time accomplishes a few things; you can hop around and put a lure near a fish that is no longer cruising. If the fish doesn't come to you, you have to go to the fish. What also happens is that the activity will often move fish just enough to create some activity. Again, don't disrupt the flow during the prime windows by drilling a lot of holes, either drill your holes ahead of time or drill a few holes precisely. When the sun gets high however and the activity slows down, you can often pick up a lot more fish by making a lot of small moves and fishing spot through. Typically, you catch a fish here and there. 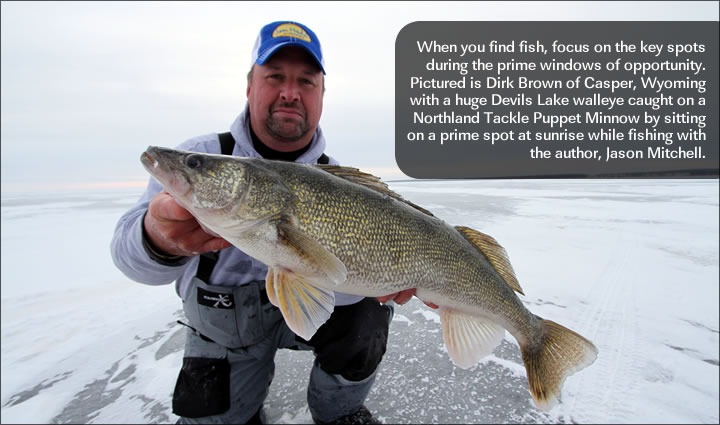 What often surprises me is that walleyes in particular often don't slide down into deeper water and become inactive like many people think is the golden rule. What I have found is that they often just quit cruising at the same depth they were active so don't start out sliding deeper, drill more holes through the depth and zone that you caught fish during the prime time as a starting point. After you fish this zone through than slide out and down.

Another assumption many anglers make is that inactive fish need a very passive presentation. Here is what I have found; jigging aggressively often turns fish around. Passive and presentations work don't get me wrong and my go to way for catching walleyes during the day is to downsize to really small lures but what so often happens is that you can drop down right next to a fish and the fish is pointed the wrong direction where the lure is not in front of the fish. When you really pound that lure hard above the fish, you can often get the fish to move and turn enough where they can than see the lure. That is why pounding and lifting works so well when fish drift off your presentation. So often at that point, you are behind the fish where they can't see you and the only way to turn that fish around is through vibration.

Understanding these windows of activity and having some strategy in how you fish a spot through as the day wears on can really improve how many fish you catch and this mentality and strategy is widely universal applying to many different species of fish on a wide variety of water.