The High and Sly for Northern Pike

Big fish frequent the upper reaches of the water column and often go undetected...
Bellied to bottom; prowling from within thick masses of weeds- that's the most common contemplation about the whereabouts of northern pike and what they are doing there.

While it's true many a monstrous Esox entangled in vegetation has been pulled through a hole in the ice, the truth of the matter is trophy-size fish frequent the upper reaches of the water column more often than most anglers realize. Even within inland lakes and The Great Lakes where depths register to triple digits, the larger the fish the higher in the water column they roam.

What are they doing there? Like their lesser brethren down deep, these marauders are also searching for their next meal. After all, they didn't get to be the biggest and baddest in the bunch by skimping at the buffet line.

But even northern pike-thought by many to be the fiercest freshwater fish under the ice-don't swim aimlessly under the surface when in search of food. They often rise to the occasion over the very structure the smaller fish are hunting from, or swimming directly above the breaklines beneath their bulging bellies.

In short: Although trophy pike might not be lurking tight to structure, if you target the upper half of the water column very near cover you stand the chance of catching the northern of a lifetime.

Walleye tournament pro Mark Brumbaugh is one of the fishing industry's finest anglers. He's aimed high and won many professional walleye tournaments by landing big fish where others had no idea they even lingered. Within the mix of big walleyes often were larger than average pike.

"I've caught a lot of big pike up high over structure in deep water when trolling walleyes, which led me to fish them just below the surface in close proximity to cover when ice fishing. And that's led to catching bigger pike more often," says the Ohio angler.

Brumbaugh's wintertime pike-ploy usually involves a swath of tip-ups strategically placed midst various types of structure, aiming specifically at weeds, wood and rock adjacent to drop-offs; especially those nearest points, cuts or any irregularity in the shape of a straight breakline.

Once his holes are drilled, Brumbaugh reaches into his aerated Frabill Aqua-Life Bait Station for only the liveliest of minnows to be nipped onto his treble hook. "Because a tip-up is a hands-off device, I want only the healthiest bait finning below. The bait must wiggle… a lot. And it needs to stay alive a long time so I don't have to spook fish by checking tip-ups too often."

Brumbaugh skewers the minnow closer to the tail than the head, often hooking it through the bottom of its tail section so that it's always struggling to right itself. "The minnow never quits squirming if you hook it here," he adds. "Little details like this that are important."

One trouble anglers often have with tip-ups is getting their offerings back down to the same sweet-spot-depth they just banked a fish at. Introduced this year to correct this predicament is Frabill's Calibrator Line Counter Tip-Up, with an LCD display line counter, so you always know the exact depth of your bait. Now resetting is a faster and smoother, which minimizes angler commotion and gets a fresh minnow quickly back to business.

A major mistake Brumbaugh sees anglers make is creating too much noise.

"Often, the fish are swimming just feet under the surface and any noise out of the ordinary will spook both baitfish and prey from the area. Sound travels faster and farther under water than through air, so anglers need to take every step as quietly as possible."

One way to lessen the need to move around is using a GPS coupled with a mapping program to find drop offs, humps, holes and other attractive lake features. From the iced-over waters of Minnesota, guide Brian "Bro" Brosdahl uses a Humminbird sonar/GPS in conjunction with an SD card filled with a LakeMaster mapping program. Map-chip engaged, he's able to instantly locate probable fish holding places. And if there's success, Bro logs the spot for a pinpoint return trip.

Electronics in hand with mapping program, Bro makes a beeline to key structure, drills, sets, and tiptoes away from the field of flags. "Adding covertness to ice fishing is probably one of the most overlooked reasons to use electronics," says Bro. "Just one more reason modern sonar, GPS and mapping programs have been pivotal in producing more fish on the ice." 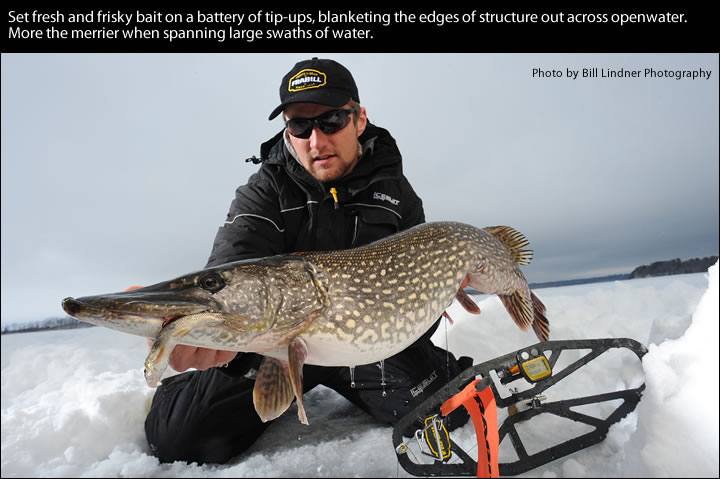 Employing crafty equipment is as important as being stealthy yourself.

Bright light seeping through a hole around a tip-up can cause alarm under the ice. Tip-ups that envelop the entire hole, such as a Frabill Pro Thermal Insulated Tip-Up, keep sunlight out and fish at ease. This unique style of tip-up also insulates the hole and keeps it from refreezing, making it easier to remove the device after a fish hits.

On days when the bite's tough, you might have to minimize gaudiness, lessening the hardware near the bait.

Instead of a steel leader to keep bite offs at bay, try 30- to 40-pound-test fluorocarbon leader material connected to your main line with an InvisaSwivel. Both are clear in color and virtually indistinguishable by pike.

If it's numbers you're after, work the weeds. But if your fishing clan is willing to invest in a trophy hunt, forgoing the button-bucks, fawns and eater does, there might be a 'turdy pointer,' or rather a 'turdy pounder' bedding out over the basin.