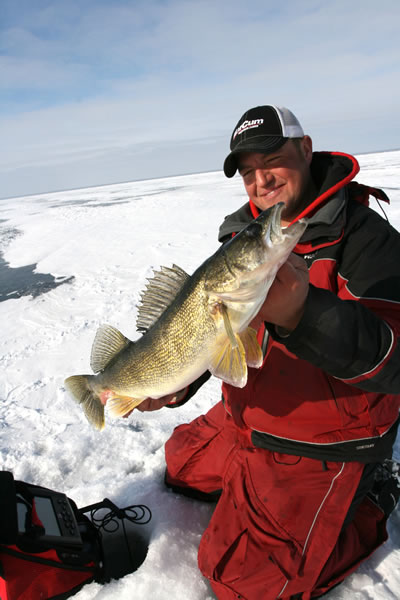 Tell you about a little discovery I've made. Finding these fish isn't the major needle-in-a-haystack deal it's been made out to be. Here's the secret: The same basin areas where I troll Shad Raps® during summer consistently draw big walleyes in winter, too. I call these key basin zones sweet spots-and they're wintertime goldmines. Scan and view these areas with a MarCum LX-9, you'll see that basin sweet spots are anything but "featureless."

Each time I hit a fish while trolling, I drop a GPS waypoint. Over time-years in my case- active zones fill in with clusters of blue dots. (I use blue icons in summer, orange in winter.) Then, when midwinter arrives and I'm ready to escape the crowds, finding big basin fish is often as simple as popping a string of holes in the middle of a bunch of those blue icons.

But even if you don't own a cache of summertime waypoints from which to start the search, no problem. Hunting 'eyes in basins really isn't that intimidating if you simply break things down into manageable chunks. Start your search just off the first breakline, perhaps where you last contacted fish, and work out from there. Drill a widely spaced string of holes, then pick up, move a quarter mile out, and do it again.

My guides and I split the task of drilling with StrikeMasters and metering with MarCum LX-9s or ShowDown Trollers. The new StrikeMaster Honda™ 4-stroke augers can Swiss cheese ice fast, and their light heft saves your strength for important things, like battling fish. We'll drill a quick line of 10 to 15 well-spaced holes. Then we'll fish and graph each one, wielding one of our favorite "crankbaits on ice," which include a UV Bright Jigging Rap®, Clackin' Rap® or Rippin' Rap®.

One thing I like to do with these 'call baits' is to rip 'em way high in the water column. You can almost feel 'em thump and vibrate below your boots. I believe basin walleyes-especially big fish-can really feel and hone in on those vibrations ricocheting off the underside of the ice. Do a rip-rip and let the bait fall back. Soon as a fish shows on my MarCum screen, I pause and do little rodtip twitches. Usually they'll come charging straight up and just smoke it. Other times, you might have to pull the bait-and-switch, dropping a smaller, more subtle spoon or Jigging Rap down the same hole.

If you don't hit fish in the first string of holes, hop on your off-road vehicle and drive another quarter mile out. Repeat the process-drill a string of holes, graph, jig aggressively. Sometimes you hit the mother lode right away and whale a 6-pounder on the first drop. Other times, might take a few hours of searching. Either way, you don't need 1,000 holes to find fish-just a solid strategic plan, and a healthy box of 'crankbaits on ice.'

Tip: "Closer examination with my LX-9 has shown that these little 'sweet spots' often consist of a slightly harder bottom surrounded by much softer substrate. This transition zone often swarms with insect life, baitfish and walleyes."

Tip: "I use call baits or 'ice cranks,' such as a Clackin' Rap or Rippin' Rap to dial up the underwater decibels. Basin walleyes are hard-hitting hawgs that respond to sound-loud and aggressive trips their trigger."

Tony Roach
Tony Roach grew up in northern Minnesota where he has been a fishing professional for over a decade. He has guided on a wide variety of lakes including Mille Lacs, Winnbigoshish, Lake of the Woods, and many more! Roach, a professional walleye angler competes in tournaments across the Midwest. Tony offers a vast knowledge of multi-species fishing, on a wide variety of waters. Tony enjoys guiding and loves to teach everything from the basics of fishing to the subtle adjustments anglers can make to put more fish in the boat.
TRENDING DISCUSSIONS
Advertise here
Advertise here
Please take a moment to visit our sponsors. Without them we would not be here.