Not an Average October Fishing Trip

By Dave Duwe - November 1, 2012
Talk about a fishing change of pace. Normally in October, my college buddies Tim, Steve and I would have been planning our annual Musky Trip to Bone Lake, in Polk County, WI. But this year was different. This October, I had the opportunity to go fishing in Chatham Harbor, off Cape Cod, Massachusetts on the Atlantic Ocean. The fishing trip was a renewal of old friendships that spans more than two decades. Because the last few years saw limited success on the Musky hunt and some wild weather, we decided it was time for a change. It was also precipitated by the fact that my friend Tim has a summer home on the Cape for free lodging.

The plan was set in motion about 10 months ago. Everyone was eager to try sport fishing on the Atlantic. As is the case in the Midwest, weather can always be a factor to consider on a fishing trip. But not this trip! We were ready for the cool/rainy October days on the water. But Mother Nature was there to throw us a curve. It was sunny, with little wind and mid 70's; it was awesome weather. Thank heavens I had shorts along. 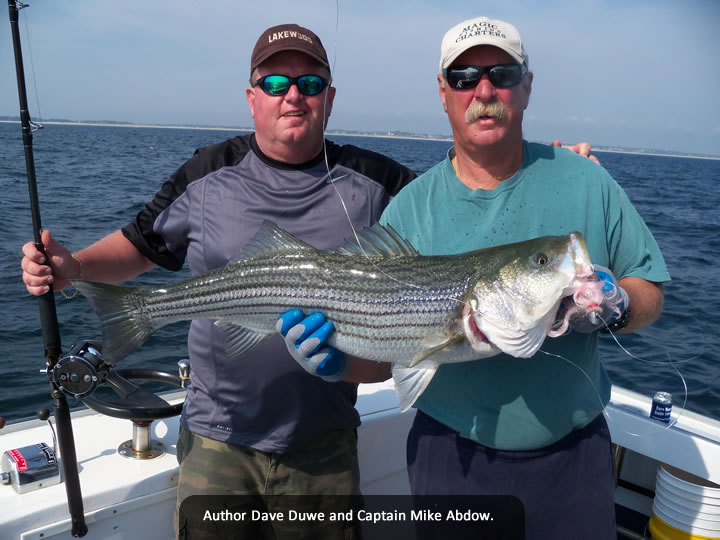 Bluefish are an aggressive schooling fish that readily hits trolled lures. On average, the fish weighed 4 to 8 pounds, with the largest being about 12 lbs. The day we fished blues, it was almost automatic. We trolled umbrella rigs and plastic squid. On the Bay side of the Cape, where we fished, the water depth was 12-18 ft. We started with really heavy tackle and gradually reduced the presentation to basic bass gear. They pulled hard and made nice runs much like a Chinook salmon on Lake Michigan. I have been on hundreds of fishing trips all over the United States, and the calm water and warm sun made for one of the best days of fishing I can recall. It sure beat sitting in a hotel near Lake Erie watching the wind blow and rain fall wearing out a deck of cards.

Most of what we caught was catch and release, although we did keep a few to eat. We had questioned Captain Hap Farrell, asking if they were good eating fish and was told that his wife loves them. After further review, any fish that is good smoked probably isn't good baked. The meat had a lot of oil in it and had a bit of a funky smell. We had planned on baking the Bluefish, but we also found it was a very good year for lobster in the area. We chose the weekend to eat $9 lobsters instead of our catch and froze the Bluefish.

The next day it was fishing the Atlantic with Master Captain Mike Abdow, owner of Magic Charters. The second day's target was striped bass. Mike was very confident that success would be had, no boat rides allowed! He was going to put us on fish come hell or high water. Mike is a fisherman, the kind of guy you would see on the TV show Wicked Tuna. The night before he had just returned from Georges Bank, trying to catch the big blue fin tuna. 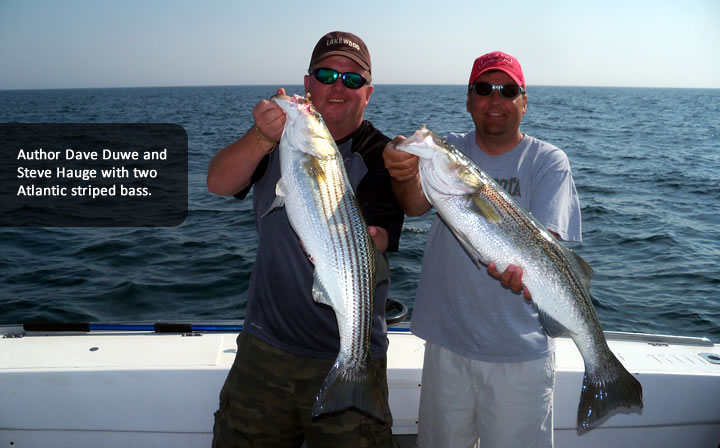 He was in total control of the boat from instructing us on jigging to telling Tim why he was sea sick. I guess drinking a bunch the night before is a bad idea. Tim found that out the hard way. We fished by the first buoy from shore, about 1 mile from the dock at a depth of 38 to 40 ft of water. Mike's method of fishing was basically, back trolling and controlled drift into the wind and tide that was ripping when we were out there.

We used some heavy tackle; 2-3 oz jigs fished on 40 lb. stainless steel line. The steel line was used to keep the jig on bottom in the heavy tide. We let out 300ft of line to get the jig to stay on the bottom. The Mylar hair on the jig was pink and translucent purple, since we were trying to resemble a squid or small bait fish. We let out 300 ft of wire to get the jig on the bottom. Then the work began; Captain Mike started the chant: jig, jig, jig, jig. He said we would hear it in our sleep, and he was, of course, right. It took us a little while to get the proper cadence jigging the rod from 9 to 11 o'clock. You had to keep the jig hopping to catch the stripers. Boat speed is crucial; to fast of a drift the jig would have brought the jig out of the strike zone. Mike has been doing this a long time; boat control was never a problem. Being such large fish, you would think the bite would be hard. The bite was actually very subtle; for every hit we had we hooked up about 1 out of every 8 times. When they were hooked, it was like you snagged a moving boat. I suppose we boated about 20 fish in four hours, with the biggest just under 25 lbs. That was plenty of time on the water to make my biceps sore. At the end of the trip Tim shook off the sea sickness and even caught a few.

It is always great to get together with old friends. My trip to the Cape was outstanding. After a few days and a couple of pills, the gout subsided. I'll keep that in mind, next time I decide to eat nothing but seafood for a whole weekend. Mike's website is www.charterfishingcapecod.com.