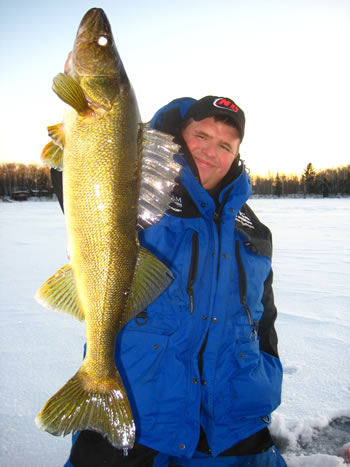 The beauty of early ice - fish are normally very plentiful and usually pretty easy to catch. The caveat - most of the time, there are too many species biting well at the same time, making it darn hard to figure out which one to pursue on any given day. But, hey, fishing is fishing, and any of the fish that are "snapping" are fun to catch. So, let's take a look at the top 5 on my list and some of my tips on how to catch them once the ice gets here in Wisconsin.

Like most of you, I can attest to the sense of excitement felt when that first sheet of walkable ice hits my favorite walleye lake. First ice is definitely walleye "prime time." Most walleyes during this time frame are still very active and for the most part have not felt the pressure from anglers in a while. When fishing slobo-eyes, which I target immediately on clear and deep northern WI waters, my favorite spots are shoreline points in approximately 15 FOW which drop off into basins that range from 20 - 25 feet (sometimes up to 35 feet). These locations are a game of tip-ups, covering varying depths on the point and into the basin flat. Pin-pointing the prime real estate is the name of the game, day or night, as the fish consistently roam the flats and up onto the points, depending on their mood. So bring your friends because the more, the merrier when it comes to setting Beaver Dams and having fun with first ice walleyes.

Giant crappies - most of mine, any given ice year, are caught during first ice. Again, I attribute this to pressure and the need to feed for both the black and white variety. Overwhelmingly, I catch almost all of these first-ice crappies using plastic tails rather than live bait. Truthfully, this goes for any time of the winter nowadays but, for first ice, plastics really rule. Typically I fish both weed line and basin roaming crappies, and this pattern holds true in both areas. My typical set-up: a pink glow tungsten jig and a glow nail tail type plastic. This allows me to fish fast and catch multiple fish without having to re-bait. Frequently, these fish are kamikaze once we get to them on first ice and all you need is the quiver of that plastic tail to seal the deal. 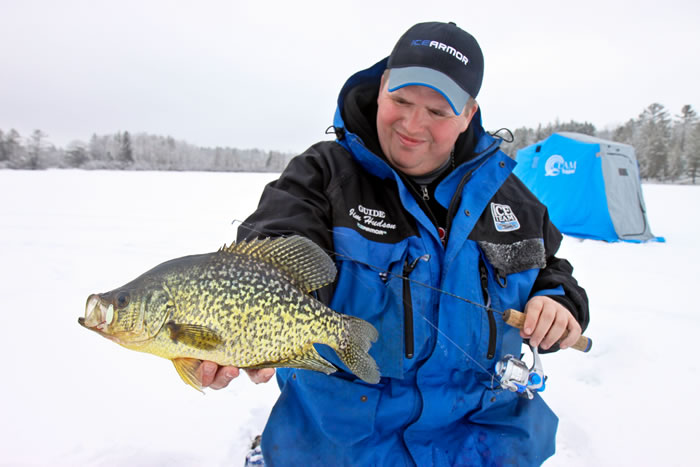 You have to love first ice just for this reason alone. Perch are one of the species I cannot wait to get out and chase once the ice settles in. Unlike most people, I put out tip-ups for first ice because perch are still mainly on a minnow diet. So, by pinning fatheads on a #10 treble and using thin fluorocarbon leaders, I can present what the fish are normally looking for that time of the year, while also covering a big swath of water. I jig as well, but typically the bigger perch will all come on Beaver Dams. 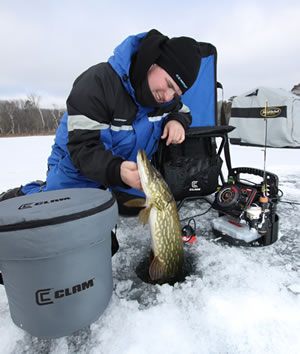 If you ask me, some of the most exciting fishing in the winter revolves around pike fishing. It is fun, easy and you usually can catch quite a few during that first ice window. What is even more exciting to me is finding the bigger pike in the system and having a tussle. Again, I look to those clear and deep water lakes - if they have pelagic bait, such as Cisco, even better. Often, when in search of the real big ones, I forego the weed edge approach many are accustomed to. Instead, I look to offshore structure (especially on those Cisco based lakes) or deep structure that juts out from shore. A lot of the large pike are on the prowl in the deeper water trying to intercept bigger prey. I use a combination jigging and tip-up approach to call in fish and then catch them. Set your Beaver Dams, with a big portion of bait (8-inch suckers or even a crappie or bluegill that you caught on that lake), in varying depths on the structure, then jig between the tip-ups with a call lure, such as a blade or rattle bait. Hopefully you catch them jigging, which does happen a lot, but if not, you are still calling in the roaming fish to take a peek at what's hanging below your spools.

Last but not least, the "bulls" of the ice arena. You have to love their tenacity and eagerness to bite during that first ice period. For many anglers this means weeding through the masses to get a limit of good bluegills. I personally try to go straight to the big ones, using an upsized approach to catching those hand sized 'gills. Spoons are the top of my list to get this job done, 1/16 ounce namely. In lieu of live bait, my new go-to attractant to dangle off the treble is MEAT by Uncle Josh. They love the stuff and it stays on the hook for an eternity, allowing me to keep a school of fish under me for a long time. Unhook and send the spoon back into the feeding frenzy. When it's on, there is no time for re-baiting, as that wasted time could send a school of 9 inchers along on their merry way.

Jim Hudson
Jim Hudson is a fully licensed guide and USCG captain born in Northern Wisconsin. Jim is a college graduate in the field of natural resources and has dedicated himself in the conservation of our natural resources and the sport of fishing. All of this has allowed Jim to become a trusted face in the fishing community, where he is a regular guest on John Gillespies Water and Woods, The Next Bite, Northland Adventures, Butch Furtman's Sportsman's Journal, featured in many of the top fishing publications, and is a pro-staffer and product consultant for many of the top fishing related companies that lead the way for the modern angler.
TRENDING DISCUSSIONS
Advertise here
Advertise here
Please take a moment to visit our sponsors. Without them we would not be here.