A Guide’s Guide to the Flambeau Flowage

Though summer is over and most have their boats put away for the winter, October is one of the best months of the year for numbers and trophy sized fish. A favorite walleye hot spot is the Turtle Flambeau Flowage near Mercer, WI. I recently spent a day on the water with Jerry "Jerkbait" Hartigan, owner of Flambeau Flowage Sports. Jerry has over 30 years of experience fishing the flowage. Over the course of his guiding, he has never had to bring fish for his shore lunches that he provides upon request. Jerry did say, he had to use rock bass and 10 inch northern pike on occasion though.

The day we picked was very sunny, high pressure with a cold front. Not the optimal time for fishing. We made the best of it however. I have fished the Turtle Flambeau for years without any significant success. Being a fishing guide myself, asking for help from another guide is sort of embarrassing. Along on the trip was my son, Nate and brother in law, Jeff, who also benefited from my willingness to get Jerry to show us the patterns that would work on this fall day.

We started the day at Jerry's wife's coffee shop, Looney Beans, for a stiff cup of coffee. The Turtle Flambeau is a short drive from Mercer, we launched at Sturgeons landing, a limited access launch. Looking at the scenic flowage I asked Jerry about other water sports, like skiing and jet skiing. He laughed and said they see one about every other year. Being late September, there were none on this particular day.

In late September, early October, the walleyes are in the old river channels, which transect the flowage, which was dammed in 1926 by the Chippewa and Flambeau Improvement Company. The state of Wisconsin bought the Turtle Flambeau in 1990 with a lot of the surrounding shoreline. In total it encompasses almost 35,000 acres. If you've never fished the Turtle Flambeau, it resembles the Canadian Boundary water area. The cool thing is that you never need to leave the state to experience it.

The fishing presentation this time of year is a simple one. It's the jig and minnow. Nightcrawlers and leeches work on the flowage, but with the water temperatures way below 70 degrees, extra large fat head minnows were the only bait we brought.

Anyone who has ever fished a flowage, knows that the water is full of flooded wood. To eliminate getting snagged up every other cast, the jigs we used were Bait Rigs Weedmaster jigs in a 1/8 oz size and a chartreuse color. The key to the jig was the weed guard to prevent the snags. We fished the jig on medium action spinning gear, with the reels spooled with 8 lb monofilament line. There is no need for fluorocarbon here as the water is really stained. Getting up early isn't required either! 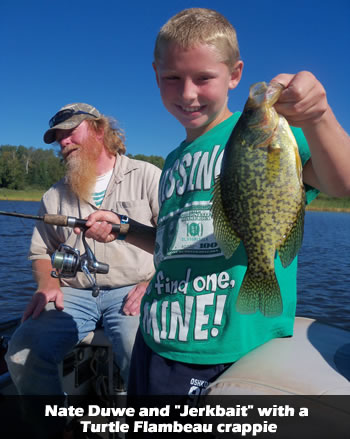 We anchored Jerry's boat on the breakline in 12 ft, which dropped down to 16 ft on an inside turn of the river channel. The location Jerry selected had a lot of submerged wood. In short order, Jerry had an eater sized 14 inch Walleye. The flowage has no size limit on the walleyes, but does have a daily limit of 3 fish. The Turtle Flambeau is speared, so the limits vary by year depending on the harvest of the Indian spear season.

Jerry said that the flowage is full of walleyes, so if we wanted to keep fish it would be no problem. This fishing guide actually prefers steak to fish, but the same can't be said of my son, so we kept a few 12-14 inch fish for dinner that night. We caught about 20 walleyes in various sizes. That was in tough fishing conditions. Jerry said that there are times in October that you can catch as many walleyes as you have minnows to fish with.

The Turtle Flambeau Flowage offers some great fishing with awesome scenic beauty. Other than walleyes, the flowage has a great Musky and smallmouth bass population, with limited pan fish and largemouth available. Due to the heavy predators, the average pan fish size is larger than most lakes. The day we were out, Nate caught a couple of crappies over 12 inches.

One word of caution about the flowage though, the water depth fluctuates a great deal and as mentioned previously there is a lot of wood floating throughout the body of water. Jerry never had his boat motor above half throttle.

At the end of the day, we had a great day of laughs along with a few guide war stories. "Jerkbait" is a great wealth of flowage information and fun guide trips. Jerry Hartigan can be reached at [email protected] or by calling 715-476-2526.