By Tom Neustrom - October 1, 2012
One man's cheat sheet for knowing when and when not to call on rattling crankbaits

The world of sound additives as they relate to fishing has been a hot topic for decades. Knowing when and where to introduce sound, and then how much of it, is critical to success whether you're trolling for walleyes with leadcore or casting bodybaits over reefs for smallmouth bass.

When it comes to walleyes, typically, I find they react more positively to subtler rattles. This drumbeat plays particularly well in darker water, amidst weed growth and submerged timber, and where rocks form the structural baseline. A fish's instinctive reaction in these situations is more impulsive than a program of stalking and striking.

At this point it's prudent to note, too, that crankbaits without any rattle supplements still produce sound. For years I wondered what sort of sound a Rapala Shad Rap emitted. It wasn't audible in the palm of my hand, but there was some type of clicking going on underwater. Upon closer examination, I realized that each bait has small grooves where the treble hook bangs against the body as it wobbles. The split rings that attach the treble hooks add to the percussion. That, and as the bill pushes water, it, too, generates an audible signal. So in reality, there is no such thing as a silent crankbait.

The sound multiplier continues as the crankbait comes into contact with objects. Ripping through weeds causes both visual and audible commotion. The bill banging off boulders and softer thudding against wood can't be ignored, either. 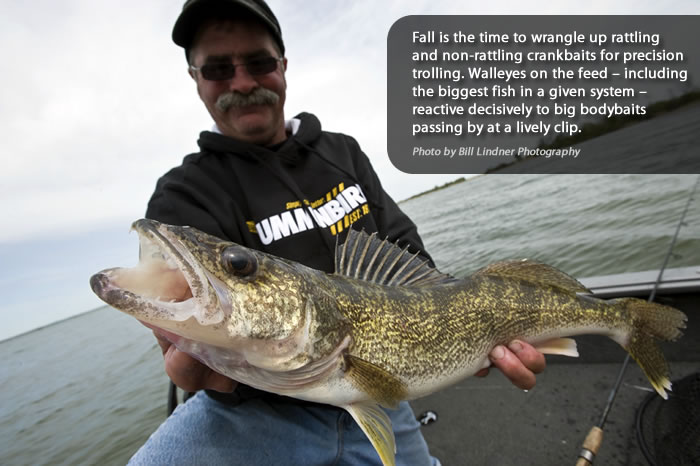 This leads right into my belief that irregular retrieves produce more fish than a straight pull. When was the last time you saw baitfish swim at one speed for 20-30 yards uninterrupted without stopping, re-starting, or darting from side to side? It doesn't happen in nature, so there's no reason to buck the natural order of things. In fact, even when I'm trolling, I'll occasionally slow down and speed up to alter the monotony. Can't tell you how many times fish hit just as the boat speeds up. And we've all been walloped during a wide trolling turn. Again, it's the visible and audible inflection that causes a fish to break.

Two famous Minnesota Twins, the Glorvigan Brothers, Scott and Marty, turned my head several years ago when they were catching monster walleyes burning lipless crankbaits with rattle chambers over the tops of cabbage weeds in the heat of the summer. The strikes were wicked and they were catching walleyes when others were just wishing. It opened my eyes again to the importance of sound in certain situations. Baits like the classic Rapala Rattlin' Rap and new Rippin Rap beg, or maybe dare fish to blow up out of the weeds. In general, the heavier the cover the more turmoil you need to create.

Open water trolling is one place that built-in rattles can make a huge difference. Most often when trolling large swaths of water and suspended walleyes are on the radar, baits with rattles can attract roaming walleyes. In such cases, I run Glass Shad Raps, Husky Jerks and the Troll-To Minnows - each features a unique, but not overwhelming sound.

And by "radar," I'm really talking about Humminbird's advanced Side Imaging. Literally, I can spy walleyes 100-feet away to starboard and port, not to mention those delicious golden arcs below. Once identified with Side Imaging, I'll drop a waypoint on the walleyes and come back trolling right through the money zone.

Gear selection always factors into a verifiable formula as well. Casting, I prefer a 7 to 7 ½ foot medium action spinning rod with plenty of backbone for pulling fish from heavy cover. To it, I marry a Daiwa Ballistic 2500 for its smoothness and capacity to cast lures across the lake. The Daiwa Procyon 2500 is my choice for cranking quickly as it picks up line like nothing else. 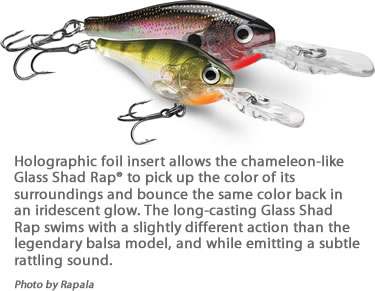 For trolling crankbaits, I switch to an 8 to 8 1/2 foot length rod to cushion the shock and not pull hooks once a fish is on. Daiwa's Line Counter Series take control of my line and fishing destiny on the troll. My choice is either the Sealine SG17 or Accudepth AD17. Both let me consistently control how much line goes out, and subsequently the depth crankbaits run.

If you're a gamer and want to take advantage of the precision trolling offered by leadcore line, consider Sufix 832 Lead Core. The metered line is narrower diameter than the cumbersome old fashioned styles. As a result, the bait dives to the prescribed zone with less line out. That, and you can actually enjoy the true fight of the fish. Combine ancient leadcore with a lesser sized walleye and the entertainment value drops. I'd rather soak a sucker minnow off the dock than drag in fish you can't even feel.

For long-line trolling or when leadcore isn't necessary to manage depth, I spool with Sufix Deep Crankin' monofilament. It sinks faster and runs deeper than comparable brands. Deep Crankin' is also your best choice for casting crankbaits, as it throws long, and its physical makeup transmits strikes effectively and gives your lure maximum motion.

Noisemaker crankbaits deserve their day in court, and chance to produce in your boat. But always remember that even so-called traditional, or non-rattling crankbaits generate sound. And oftentimes the subtler amplitude is what summons success.

Tom Neustrom
Tom Neustrom is one of the best fishing guides in Minnesota and a tireless promoter of the fishing industry with 33 years of experience backing him. Tom has been recognized by In-Fisherman, North American Fishing Club, Fishing Facts Magazine, and Minnesota Sportsman as one of the top walleye fishing guides in the country. Working closely with numerous publications, Tom writes constantly from his home in Grand Rapids, Minnesota, and enjoys sharing his knowledge and expertise in the sport of fishing with thousands of readers.Tom leads fishing seminars and workshops throughout the Midwest. He has led seminars and workshops in Denver, Buffalo, N.Y., Chicago, Milwaukee, Detroit, Mich., Bismarck, N.D. numerous cities throughout Minnesota, and many smaller towns and cities across the Midwest. For more information on Tom visit his web site at www.mnfishingconnections.com.
BITS & BITES
Advertise here
Advertise here
Please take a moment to visit our sponsors. Without them we would not be here.