By Mitch Eagan - September 1, 2012
It's the time of year Great Lakes anglers can catch a stringer full of fish too weighty for one man to carry

More often than not, the best way to find fish in big water is to fish it small.

With that said, ponder the enormity of the Great Lakes. To say these waterways are massive is the understatement of a lifetime. Each of the five is literally hundreds of thousands of acres of water encompassed by thousands of miles of shoreline. Pinpointing the whereabouts of the salmon and trout can be harder than stumbling upon a #14 hook you dropped on a rock strewn riverbank a week earlier. 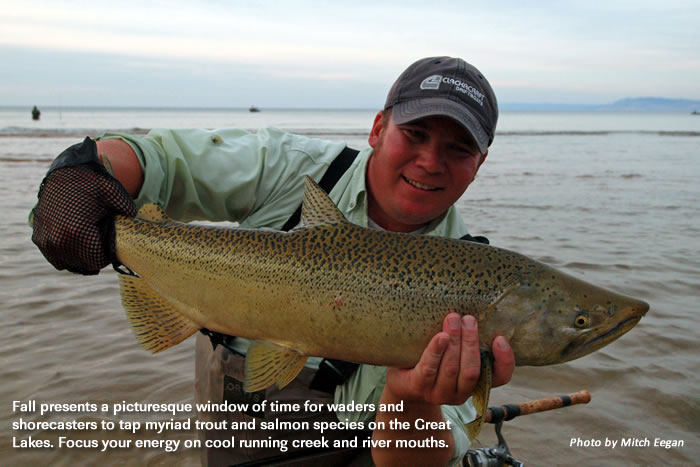 This time of year, however, anglers are in luck; autumn is the time when the majority of the big lake's anadromous fishes are swimming shoreward in preparation of procreation. Other finned prowlers without that particular twinkle in their eye have also hit the beaches; however, they're here to feast on wayward eggs and the small fishes doing the same.

In short: Now is when anglers can don nothing more than a pair of chest waders; grab a single rod and reel and a handful of lures that can be cast far, and catch a stringer full of fish too heavy for one man to carry.

Now don't get me wrong, there's nothing I like more than covering as much water as I can muster within the gunwales of my Lund, scanning and trolling for these hungry migrants. But there's something revitalizing about the feel of gravel grinding underneath the rubber of your soles, casting into the waves, and the first-hand hookset on a hard-fighting fish.

But there's more to catching these fish, now on their pilgrimage toward the perfect spawning grounds, then an aimless cast into the great blue yonder.

Affection Under the Facade

As you read this, Chinook (king), coho (silver), Atlantic and pink salmon laden with eggs and milt are congregating near river and stream mouths. Some species of trout, too, spawn in fall. Big brown trout are here to breed, as well two members in the family of char family - brook trout and lake trout.

Although the stomach contents of these fish will show signs they haven't eaten for a while, they are still aggressive and willing to strike out at a flashy lure. It's an instinctive clout. After all, these fish have been slashing out at forage since the moment they were hatched. It's in their blood.

Lures with an abundance of flicker and flash as they are retrieved, like spoons and spinners, are what drive Great Lakes salmon and trout wild. The key to success is casting bait heavy for distance with a line strong enough to withstand serious abuse, yet subtle enough to resist coiling in cold temperatures.

Thick stamped spoons shaped to waggle wildly when reeled in slowly are preferred. Blue Fox Pixee Spoons and Luhr Jensen Laxee Spoons each have a unique profile of their own and can cover the water column from top to bottom. Spinners with heavy bodies, such as the size-4 Blue Fox Deep Super Vibrax and Classic Vibrax UV (UV Bright colors) stand out in the tackle box.

Casting spoons and spinners is one of the few times I suggest using a high-quality, ball-bearing snap-swivel or new InvisaSnap from Aquateko. These versus a lone snap, which twists the line as the wide-bodied baits rotate. A superior monofilament with significant abrasion resistance is now the norm due to the influx of the invasive quagga mussel - their shells will shred the cheap stuff in an instant. 10- to 12-pound-test Clear or Camo Sufix Siege line has an armor-like coating that stymies break-offs, yet is soft enough not to impede a lure's action.

Rods longer than the average are requisite when casting lures into the surf. The extended length acts as a shock absorber for lighter line as well at keeps it up and off the surface. This is especially import and when waves are rolling in.

My favorite by far is St. Croix's 9-foot 6-inch, medium-action Avid spinning rod, coupled with a size-3000 WaveSpin reel, which balances well and has the capacity to hold a lot of line for long runs while its drag releases pressure smoothly.

The biggest mistake I see anglers make when fishing the surf is staying put in one spot, especially when others around them are catching fish and they are not. Salmon and trout are ever on the move, but not wandering just any ol' where.

When casting, aim for any dark areas you can spy through the lenses of a pair of polarized glasses. These are gullies in the sand just slightly deeper than the surrounding bottom and the areas where fish prefer to roam.

Looking to land a limit of silver-sided salmon trout from the Great Lakes this time of year? Just don the waders, grab a rod, reel and a handful of lure and hit the surf. Cast. Retrieve. Hang on.