By Dennis Foster - September 1, 2012
Thoughts of Pheasant Hunting may not be your highest priority until the leaves are falling. But, if you are serious about the sport and want to get the most out of your hunting experience…you should be doing something about it right now.

I know many of you feel all you need to do is grab your trusty old gun and vest, toss the dog in vehicle and you are all set. If you want to break from the mold a bit and shake up your routine, some preparation would be in order.

First of all, just how successful have your hunts been the last couple of years? If you're not conjuring up memories of bountiful days, perhaps it's time for a change of scenery-and luck. I hail from South Dakota and will freely admit to being prejudice, but for darn good reason. It is really just that good here. Even when we have a so called "down year", we still have many times more birds than any other State could ever hope for. This year will be an "up year" because of no Winter kill and a very strong hatch this Spring. The Good Old Days are right now and South Dakota is definitely worth checking out and I would suggest if you plan on coming out to book as soon as possible to ensure your spot as when we have high bird numbers…the number of hunters rises in proportion. 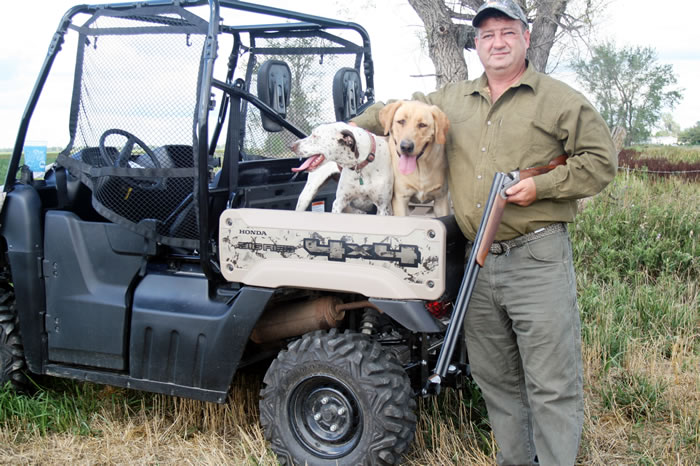 Maybe you are seeing plenty of birds but that so called trusty old gun just isn't getting the job done as well as you would like. Or, you are like the rest of us and just want something fresh every once in awhile. If that is the case, when you are snooping around for a new gun, I would recommend that you check out what Baserri Shotguns (www.baserrishotguns.com) has to offer in the way of fine field guns. My Guide Clients and I shot their MARI HR over and under last year and the unanimous consensus is that is easily the lightest and most instinctively swinging shotgun that any of us had have ever shouldered. This is a crucial quality for the wild, fast, and hard cutting Pheasants that we hunt. The HR is truly a joy to carry due to its weighing in at a mere 6 pounds 3 ounces. As I am aging and carrying a few extra pounds of my own in all the wrong places, this is greatly appreciated and helps make up for some of my overindulgences.

This leads us directly into what you should be doing right now as there is not time once the season arrives. That would be getting yourself and your dog(s) into at least somewhat passable shape. Unless you hunt on a Preserve where they release the ever wily Pen Raised Colorful Chickens directly beneath your feet…you will end up walking a bit. This does not mean you need to pass a Marine Corp physical or fit into your high school jeans. But you should be able to carry your carcass around well enough to perform the task at hand and not be miserable and sore for a week or more after a few days spent hunting. So it would be wise to start yourself and your dog on some sort of a program just as soon as you can.

The one thing that I and any other Outfitter will readily attest to is that we often witness our Clients showing up with their pride and joy pooches carrying large pouches. Meaning their dogs are downright fat and quickly tire and become useless to them. Nothing is more disheartening than seeing your pal just not making the grade. It also not overly kind to let your dogs get out of shape and then suddenly push them through the fields and expect their best performance. In fact, it is even out-and-out dangerous as far too many dogs are lost (die in the field) each year for just this completely avoidable and senseless reason.

The conditioning I am referring to means you and not just your dog. This is only half of the equation. I will share a tongue in cheek, but a very representative example of just what I am talking about. I have a friend who is by all accounts a good guy, avid outdoorsman, and runs some pretty impressive labs-but he is also overly sensitive and I dare say more than a bit hypocritical when it comes to good natured ribbing. You see he has a great sense of humor as it applies to reminding me-along with our entire community of every time I perform one my all too frequent screwups. I guess that is the price one has to pay for the sin of being imperfect. So to protect his near angelic innocence; let's just say he is a foreign fella who goes by the handle of Omar Muhammad. 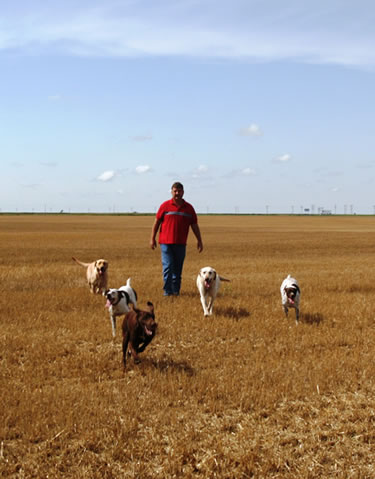 His routine goes something like this; load dogs into pickup-along with a cooler-stop at the local watering hole for exercise supplies. Ice, beverages, and beef jerky. Ice and beverages go into cooler (minus one) and jerky is fed to the dogs. Then head out of town and find a suitably deserted country road. Dogs are now let loose to do their thing with him quite comfortably remaining in the comfort of the pickup seat, with cell phone at the ready.

The purpose of the phone is to keep him well occupied and entertained by calling unfortunate fools like myself or anyone else gullible enough to answer his calls after 5:00 P.M., while his dogs are doing the actual exercising. Once he is firmly convinced he has given all the grief the recipients of his fine verbal assault can bear or runs out of beverages-whichever comes first-it will now be nearly dark and time to load the dogs in an attempt to head for home in a timely fashion.

Lest his Wife discovers he has once again become distracted and detained in said waterhole on the return trip. Note that she is more concerned with the Canines than him as she is fully aware that he is far from unfamiliar with and seems quite comfortable in these surroundings. Besides, he has most likely encountered some of his friends (fools) inside and has developed an irresistible and undeniable urge. That would be feeling it is more effective to disperse his brand of high compliments, share his vast knowledge on innumerable subjects, and spread some general B.S. firsthand…rather than rely on the phone. After all, he now has a somewhat captive audience in which to perform in front of.

In this scenario, dogs will be rescued by the Wife and the cell phone quickly comes back into play…albeit for very different reasons. At this point he is the one answering and squarely on the receiving end of some of her verbiage detailing his lack of ability to tell time, thoughtful nature, and continued inability to consistently find his way home. Not totally undeserved, I might add. In the event he becomes headstrong and disobedient, discipline is immediately administered and enforced with his drooping butt now firmly planted in the proverbial dog house.

The moral of the story is to try and not become an Omar Muhammed. All jocularity aside, get out and do yourself and your dogs some good by taking long walks and spending quality one on one time with them. You will find that they will not only be in better shape, but also promptly become more loyal and well behaved. A happy healthy dog will do most anything to please you. By doing so, the same could possibly be said about you, and your Wife might just grow to appreciate you more. The only drawback may be that your cell phone will continue to ring; only this time the owner of watering hole in question may be inquiring as to your whereabouts and opining about you and your wallets less frequent visits.