By Mitch Eagan - September 1, 2012
They glitter. Shine. Shimmer in the light. Minuscule minnows and young-of-the-year fishes are everywhere. Deep, shallow, swimming amongst the thickest cover, suspended high in the water column or bellied to bottom. The fact is there are more of these tiny tidbits swimming about lakes, reservoirs and rivers than any other species with scales.

While there are still days the old adage "big lures catch big fish" holds true, the fact of the matter is the opposite is more often spot on. Over all, little fishes are what larger fish eat; the reality being all sizes and species feast on bite-size prey over the hefty ones every day. This premise drives the recent explosion of micro crankbaits hitting the stores. The devil is in their details - external scales, realistic paint-jobs and often 3D eyes molded into the body as well an alluring wiggle that screams "Eat me!"

Fish 'em correctly and there will be very little scrutinizing by giant fish before they go for the gorge. Best thing about micro, or ultra light crankbaits? They are just as easy to use as any other crankbait. Cast or troll 'em, it doesn't matter. One technique's just as deadly as the other. But you may want to use equipment made for catching larger fish than you think on these little lures - because behemoths will bite 'em. 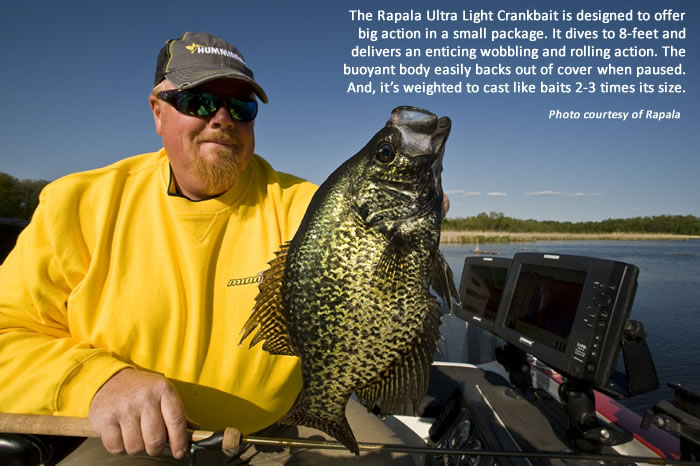 Walleye tournament angler and Rapala prostaffer Mark Martin has discovered the power of pulling both the Ultra Light Minnow and Shad behind planer boards and leadcore. "These bitty baits catch big fish year 'round; many times out-fishing the larger lures I use. So much so they are becoming my standard size to try before anything else," says the pro who's been coined the "Original Champ" for winning the first ever Professional Walleye Trail Championship in 1990. "Their wobble and slow sinking action make them excel when trolling with the waves as they stop, drop and dash forward with every surge, which triggers strikes."

When trolling Rapala Ultra Lights, use a rod with a limber tip so you can see the lure still has its tantalizing action and not fouled with weeds. The St. Croix 5- and 7-foot Eyecon trolling rods are proven performers. Ten-pound test monofilament such as Sufix Siege or the same test of Sufix 832 Advanced Superline - the later getting the lure down farther in the water column if need be-are the heaviest you should use. Anything heavier will impede their action. If weeds become a nuisance, try pinching on a BB-size split-shot three feet above the micro crankbait, which will stop the plants from sliding down the line to the lure. 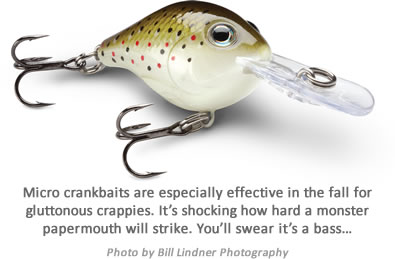 Big bass also chase and chow on undersized baits. "Rapala Ultra Lights work wonders for both large and smallmouth bass, especially when the bite is slow when the barometric pressure's high or when fishing in lakes with heavy fishing pressure," says Rapala bass pro Brandon Palaniuk. "Rarely do other anglers cast such small lures; they're just something big fish that have been hooked before aren't accustomed to seeing… yet."

Because both the Ultra Light Minnow and Shad are weighted, a 7-foot light-action St. Croix Panfish Series spinning reel filled with 6- to 8-pound-test Sufix mono or fluorocarbon or similar test 832 Advanced Superline will send these lures soaring. Like when trolling, the lure's wide rolling stroke while sinking encourages professional anglers to use a stop-and-go or twitch-and-pause retrieve over a steady one. Crank them back along the edges of weed beds, over rock piles and along wood and hang on.

St. Croix pro staffer Brian "Bro" Brosdahl chimes in on the topic: "By fall, the biomass of young of the year baitfish has been knocked down significantly. So with food now scarcer, these mini hardbaits become super appealing. I throw them to catch everything from crappies to walleyes to smallmouth bass…even serving plate sized bluegills will take a poke."

No matter your tactic, tie these micro crankbaits directly to the lure's split ring on the lip verses using a snap or snap-swivel. Any additional weight added from the hardware will hinder its already hand-tuned and tank-tested tremble.

Cast. Troll. It doesn't matter your tactic, these shrunken hardbaits will catch fish of all sizes and species.