By Jason Mitchell - September 1, 2012
The fact that walleye fishing is good come fall is no secret. Realistically one of the best times of year for seeing solid patterns develops with great fishing. Big fish are often fairly easy to target with some consistency. Despite how good the fishing is late in the open water season, there are not that many people out fishing come fall on many major walleye fisheries. Just too many things to do outside like hunting and for many people, they have got their fishing fix for the season long before fall. The only people left on the water are the real diehards and their numbers are few.

Somewhere, there has to be a bite going on where the boat ramp is crowded and people are playing a game of bumper boats but compared to spring and summer, the fall is pretty relaxed and quiet on much of the water I fish. The lakes are so quiet that by and large some of the best bites happening are on well known community holes. Now obviously community spots are good spots otherwise the spot wouldn't attract enough fish and boats to be considered a community spot but these locations can really shine during the fall. 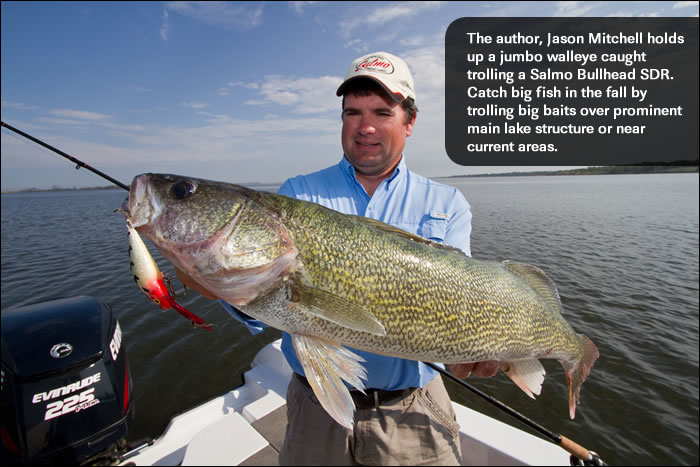 Typically, a community spot is a well known spot that attracts attention. These spots are often big and prominent or are limited. Perhaps a big reef or bar that is a major staging area for fish or an incoming river or hole that can hold a good number of fish. Obvious structure typically attracts fish come fall. Bottle neck areas that funnel current along with any incoming current from rivers or creeks can also stack fish up. Most of these types of spots are no secret. Despite the fact that these locations are all known spots on most bodies of water, the pressure is light come fall and these spots just seem to get better. These types of locations are good when there are a lot of boats around but really heat up after everybody puts their boats in storage.

The biggest lesson I have learned over the years about fall fishing is to not out think myself. There is no worry about finding little wrinkles or patterns that are off the wall because you don't typically have to factor angling pressure into the equation. Don't worry about finding a secret spot where there are no boats, typically you can fish the most well known spots on a body of water and not have many boats around. What can hurt the ego during the fall is that many of these well known spots that everybody knows about often fish much better than the small off the wall spots that might be considered secret.

This is a big adjustment for some anglers to make. Many good anglers succeed through the season by staying one step ahead of the crowds and finding small spots that haven't seen pressure. You really have to turn this switch off in the fall on many bodies of water. Fish the obvious and swallow your pride. The biggest fish each season come from many of these well known locations that are punched into just about everybody's GPS and the time to fish them is right now when not many boats are left on the water.

There might be many reasons why community holes light up come fall besides the obvious lack of angling pressure. Fish often seem scattered early in the fall but as fall progresses to winter, fish seem to stack up in areas. Come mid to late fall, fish often seem to form large schools and at some point congregate into a pretty definite area. The spot has to typically be pretty big and obvious to hold a really large school of fish. Small spots are not capable of holding a gigantic school. The other thing that big spots do is stop or stall traveling fish. During the fall when the fish typically move a lot at some point, big spots intersect and stop more fish. Typically when fish put on a lot of miles traveling, they will get paler in color.

Incoming creeks, rivers and bottle neck areas that focuses current are also phenomenal places to target big fish during the fall. Typically as well, the fewer the locations like this on a body of water, the better the spot is and also the more well known the spot is. On some fisheries, the game takes place after dark. Wading out on current seams and eddies next to incoming streams or causeways might be the hot pattern. Trolling stick baits along rip rap or across large reefs can also create top after dark patterns and usually these patterns fish best around a full moon. Day time patterns can run the gamut but typically range from big prominent points and reefs to current.

Across the board, I have caught most of my really big fish come fall by either trolling or casting some type of crankbait. Big fish eat crankbaits any time of the year but they seem to be even more productive during the fall. Crankbaits tend to trigger the bigger fish in a school and enable you to cover water to fish through a spot fast. There are many theories as to why, but bigger crankbaits and lures seem to become more productive during the fall. Larger lures like the number 6 size Salmo Hornet pull hard and displace more water than most crankbaits but they sure do become more effective late in the season. Short lining larger deep diving lures so they move more water is a top tactic for triggering fish in the fall. Other great fall lures include the Reef Runner Deep Rippers, Bomber Long A Deep Diver, Rapala Jointed Shad Rap and the Salmo Bullhead SDR. Suspending stick baits are also a deadly lure option when fishing after dark. Lures like the Rapala Husky Jerk or Salmo Suspending Sting catch several trophy walleyes each season.

Big baits on big fish, fishing classic community holes and spots is the theme come fall across many walleye fisheries. Not many secrets this time of the year, you just have to commit the time to be on the water. If you can bear the cold and face fishing community spots, you have a great chance of sticking some of the biggest walleyes each season.