By Scott Stankowski - August 1, 2012
With the hot weather and drought we have experienced this year, crops are shriveling up in most corners of the state. The same belief could be thought of for mast crops and berries. A keen hunter relies on these crops and follows them in his quest for big game. Where the food is the bear and deer will surely be. My thought process heading into last week was to narrow my search down to a few spots over the next couple of weeks to hone in on a spot not affected by the drought. I quickly found out that Mother Nature has other ideas. 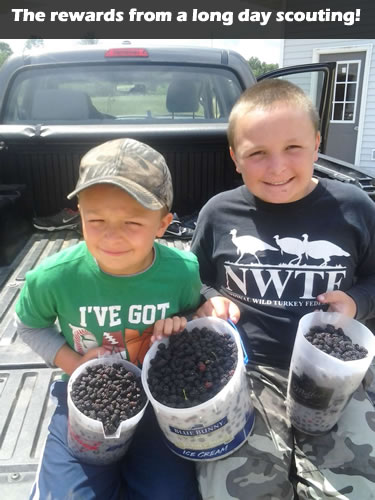 The boys and I planted a fall food plot two weeks ago and set up a couple of cameras. We wanted to check out both, and as we headed out the door I thought it would be a good idea to bring a couple of blackberry pails along just in case. The food plots were 50/50 in that one was showing some good growth and the other was not. The one that was growing was in a slight depression in the field of corn. My cameras had the same results, one worked and the other did not. Fortunately the one that worked had a buck outside of the ears and as soon as Austin saw it, he called dibbs.

We walked down the road and into a section that had been clear-cut about seven years ago. It is a jungle in there and holds a lot of blackberry bramble. We were surprised at all the berries. It was not the quantity either, the quality of the berries were phenomenal. We quickly got to work and made short order of our pails in a couple of hours. We headed back the next day and got twice as many. This story certainly could be about reaping the benefits of a summertime harvest and what to do with the fruits of our labor.

This story however is about some pre-season thoughts on the upcoming bear and archery deer season. In these past few days I soon realized that the animals are not suffering from the drought like we are. There is plenty of moisture in the woods, especially where there is shade. This shade protects the undergrowth, making it lush. Knowing that a one of the whitetails favorite meals from now until the middle of winter are blackberry leaves, I paid good attention to the signs of missing leaves on the bramble. Where the sun had constant contact with the leaves, they were turning colors already and drying up. This gave me a clue as to where to set-up this fall.

What the animals will be missing this year is direct moisture or water. All animals need to supplement their food with drink. Hunting near a watering hold, lake or river will be your best source this fall in bagging an animal. With this year's drought, finding a useable water source will be tougher, but once you find it, you will be in business. If you do not have a water source on your property, by digging a hole and then layering in some clay in the bottom, you can create one. Thinking that you will accomplish this with shovel and pick is a dream, using a backhoe or bulldozer is your best bet.

For those of you that can bait this fall, placing bait with moisture in it should be key. With the late hard frosts we had this spring, apple trees took a hard hit. Finding apples will be just as hard for you as the deer. If you can find a reliable source of sweet apples you will be in business. Deer as well as bear prefer small crabapples that they can handle in one bite.

Now is the time to get out into the woods and check on the spots you think are huntable, with the way the climate has been, things have changed in the woods. Those that adapt and make the necessary changes to find what the animals want will be the ones eating steak before the blackberry pie.