By Jason Mitchell - August 1, 2012
Catching more walleyes on crankbaits sometimes boils down to having a system or program in the boat that enables you to keep the lures in the water in front of fish. When you have a system in place that enables you to hustle and keep lures in the water and also enables you to either stack lures in tight formations or use multiple planer boards, you get lures in front of that many more fish. There is no right or wrong procedure for getting this done in an organized fashion as I have seen a lot of great walleye anglers over the years that had a little bit different game plan but being able to duplicate success, make tight turns and keep lines in the water really is what sometimes seperates the good trollers from the really good.

So many anglers worry about finding some silver bullet like a specific color pattern and it does pay to switch up colors and lures. So often however, the effeciency card gets overlooked. When we just look at fishing as betting odds, the odds go up statiscally if we can be efficient. Effeciency starts by matching up rod and reel combos so that they are calibrated. Use the same rods in pairs across from each other in the rod holders. Keep the reels the same, the line the same, everything the same so that when something starts working, you can match up. To take this a step further, test your reels to make sure they are calibrated. Make sure your rod holders match up at the exact same angle opposite from each other as this will help keep everything calibrated.

When running several lures with multiple rods, there are many strategies and techniques to getting a number of lures behind the boat. Without planer boards, most anglers will run four to five lines out the back of the boat max on most walleye rigs. There are several variations to accomplish this but generally, the rods out the very back of the boat are out at more line. While the rods forward from the back rods are typically under the back lines on less line. You can also reverse this so that the back rods are low with less line and the side rods are high with more line but I don't like to point the rods any higher in the rod holder than I have to as it makes the line counter less accurate. When the rod tips are really high, the lures run higher as the line realistically starts counting close to where the line touches the water. For example, if you have a bait that needs seventy five feet of line to reach ten feet but you have the rod so high that there is only fifty feet of line in the water, you are not running anywhere near where you think you are. If you are conscience of this, you can cheat out more line but I find that when I troll this way, I cannot depend as much on published dive curves. 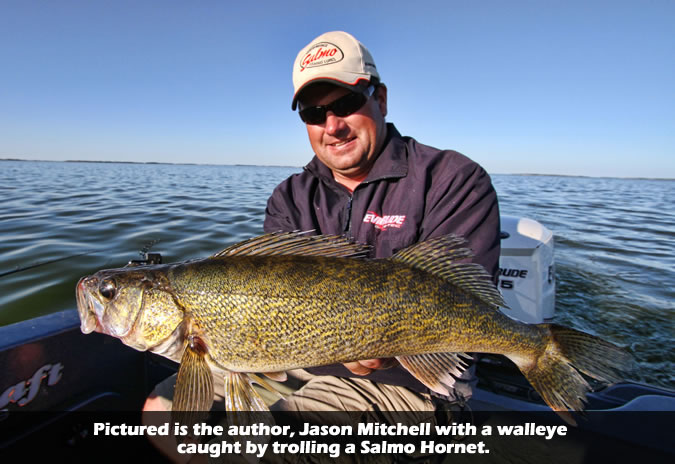 Now running two lines further out the back and two more lines on the sides underneath works fine if you can put together a program where fish will hit two different sizes of lures. Say I am trolling in twelve feet of water and the fish are hot for Salmo Hornets. I can run a few number five hornets out the back at say 65 feet and than I can run a few bigger number six hornets at forty feet and keep everything from getting tangled as I troll as long as I keep the lures from getting tangled as I let out line and reel fish or lures on the back rods. Often, I like to run our ten and a half foot trolling rods we designed on the sides just because these longer rods spread the lures out but the extra length creates a nice gap right behind the motor where I can sneak out the back lures without getting tangled. For deeper water where I am running so much lead core for example that I can no longer use a clip on board, I will run our fourteen foot rods as the extra distance just eliminates tangles and spreads stuff out.

Often the fish will hit a few different lure sizes or styles so that you can use a handful of different lures and catch fish. Some days the bigger fish will come on the bigger lures that are closer to the boat while the smaller lures catch more fish but this is not always true every day on the water. Trolling can get a little more complicated however when the fish will only go on one specific bait. If you run one bait on the same distance of line on four rods out the back of the boat, you will typically run the risk of tangling lines. When the fish do get really specific on what lure they will hit, there are a few options for getting more lines in the water. The first option is to long line out the back to get to the desired depth and than run snap weights right down below the boat. Another option is to combine lead core out the sides while long lining out the back. With the fourteen foot rods in conjunction with our five trolling rods, you can run fourteens out the sides and five off the back to avoid tangles if you need to run four lead core rods out the back.

When fishing gets tough, switching baits is often the key… finding that one bait that gets bit. Even when fishing is good however, with a particular bait, I still like to keep experimenting with at least one rod. That guiny pig rod gives me a lot of valuable info in that I know without a doubt that the fish will only hit one specific lure and as the day changes, having that one rod that keeps getting experimented with allows me to keep up with the changes quicker without the mental games. What also really triggers fish however on the really tough days is to run the cranks in as tight of a formation as possible. The trick is to keep these lures moving through the water together less than ten feet apart without getting tangled up. Obviously, tight turns and complex structure makes this impossible but when fishing open water or large enough spots where you can just keep the boat pointed straight for longer periods of time, the tight formation can be the ticket on the toughest days.

"The best trolling programs keep you effecient where the angler can keep the right lures in the water in front of fish."
Another way to run the same lure at the same distance behind the boat with multiple rods is to use inline planer boards. With planer boards, most anglers like to keep the rod tips up as high as possible to keep as much line out of the water as possible especially in swells as the boards become much easier to read. I have always been a fan of the Offshore boards. When running the same lures, planer boards can become much easier because you can rotate rods when catching fish or checking lures. There are a few different systems to get planer boards back to the boat but here is the basic plan that myself and many other anglers I know implement. When the outside board goes, you can reel the inside board in and lay the board in the splash well opposite to the side of the fish if you have a really big fish. This opens up a lane to get the board to the boat and net the fish.

As a guide, I often had the anglers just sit up in the butt seat so that the planer board came out of the water with soft steady tension on the fish. As the planer board neared the boat, I would just hold my hands out to the side of the boat and tell the angler to reel the board up to my hands. After I unhooked the board, I held on to the line with a finger and thumb and told the angler to reel the rod tip to my fingers. This program simplified getting the board off and kept slack from getting in the line. This also kept me next to the controls of the boat where I could keep the boat going just fast enough to keep the tension steady without having the planer board swinging frantically causing slack.

Regardless of what lures you use, they are much less effective if you are fouled up. So often, walleye anglers get worried if they are not pounding bottom with the lures but day in and day out, I feel I catch way more fish if I error on the side of high, fishing above the fish. Especially in clear water, I don't think walleyes have any issue at all moving up four or five feet or more to hit a lure. When I am looking for fish especially, I fish high as I can keep the lures in the water longer without worrying about debris. Really turbid water or river systems often call for more constant contact but I don't fish right next to the bottom unless I have to and I think that helps me catch more fish with crankbaits.

The other trick to really catching a lot more walleyes with crankbaits is to only use lures that are tuned exceptionally well. Kick up your speed to two and a half to three miles per hour and test the lures before you pull them. Use lures that can stick to a perfect cadence at these faster speeds because when you slow down to troll them; these tuned lures catch way more fish. Salmo Lures are hand tuned and a couple of lures in particular like the Hornet and the SDR Bullhead are phenomenal walleye lures. There are other good lures as well that are not hand tuned but you just have to go though a half dozen lures to find the really good baits with good action.