By Dan Small - August 1, 2012
After nearly a decade of hunting them, Wisconsin's dove hunters are beginning to get a handle on how to hunt this tricky little game bird. According to Wisconsin Department of Natural Resources reports, hunters have taken around 100,000 doves during each of the first nine seasons. With less than a month to go before this year's September 1st dove opener, now's the time to start planning your dove hunts.

Most folks know by now that there are several options. You either wait somewhere in their anticipated flight path and pass-shoot them, walk them up out of sparse cover, or figure out where they want to be and get there ahead of them. 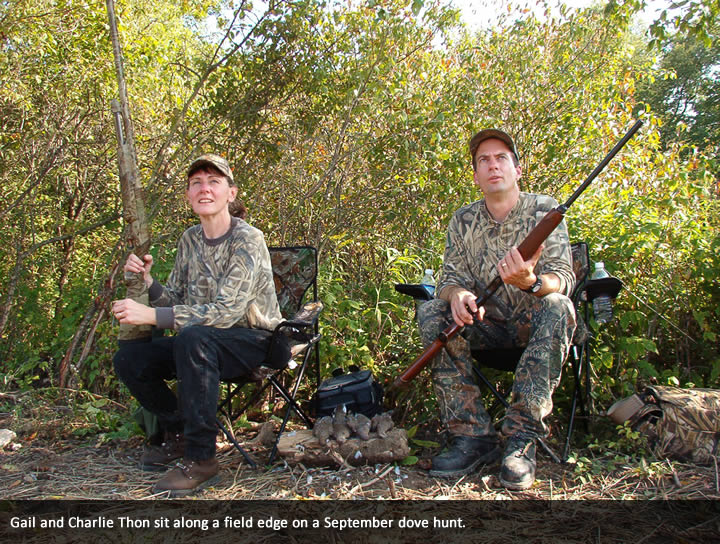 The first two options make for tough shooting. Passing birds may come from any direction, at any speed and at any time, forcing gunners to stay alert and driving them crazy with their erratic, no-two-targets-alike flight pattern. Flushed birds fly fast, climb quickly and zigzag as they get out of your way.

If you pick the right spot, however, the third strategy is likely to be the most productive, as doves heading for a specific place offer slower and easier incoming targets. The trick is to pick the right place, and to do that, you need to know what doves are looking for.

"A dove doesn't do much more than eat, drink and loaf around," says Charlie Thon, a Pennsylvania transplant with many years of dove experience.

Thon and his wife, Gail, hunted doves before moving to Wisconsin more than a decade ago, and their knowledge of dove habits enabled them to score early and often on Badger State doves, while Wisconsin hunters were still trying to figure them out.

The key to finding doves consistently lies in those three habits Thon mentioned: eat, drink, and loaf. Doves eat seeds, both wild and agricultural. Like other birds, they drink water, but not every waterhole will attract doves. And they have preferred loafing spots.

Refine these three needs into an easy formula - wheat, water and wires - and you'll soon find you have more doves to shoot at, if not more to clean at the end of the day. 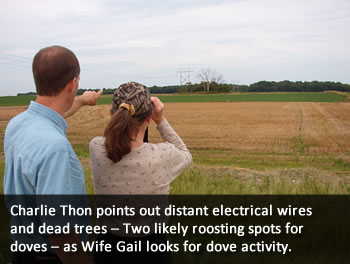 Wisconsin's corn crop was hurt by this summer's drought, but wheat and other small grains fared better. Across southern Wisconsin, the small-grain harvest has left thousands of acres of stubble fields. Doves will frequent any grain field once it has been harvested, and they'll feed on weed seeds in fallow fields as well, as long as they can easily walk around in them.

As grain is harvested, doves move into a field to glean what the combines leave behind. Modern harvesting machinery still leaves enough waste grain to feed doves well into the hunting season.

Doves typically feed twice a day - early in the morning and again late in the afternoon. They may hang out in fields in between, but most action will come as they fly to and from fields early and late in the day.

Pick a fencerow or field edge where you can sit in the shade and see incoming doves from a distance. Doves often approach a field from a specific direction, providing better shooting on one or two sides. You'll know soon enough if you're in the right spot.

Meet at the watering hole

In this dry year, any standing water is especially attractive to doves. Doves usually drink twice a day after feeding, so waiting near a waterhole often yields good shooting. Morning waterhole action is usually steady, as doves come from varying distances. Afternoon action starts slowly around 3:00 p.m. and gets gradually better and better as dusk approaches.

Doves will use any waterhole with a few inches of bare shoreline where they can land, take off and walk easily. Forget ponds completely ringed by cattails or other tall vegetation.

Streams and rivers, especially those with sandy banks, can be sleeper dove hot spots. Intermittent ponds and puddles will also attract doves. In dry weather, birds will come from miles to the smallest waterhole.

Since waterhole shooting is best early and late in the day when the sun is low in the sky, keep the sun at your back if you can.

A bird on the wire

One of the biggest concerns among folks who oppose dove hunting is that lazy hunters will shoot doves off electrical transmission lines because that's where most non-hunters see them. Doves do spend a lot of time sitting on wires, but you've got to be a couple shells shy of a full box to shoot a bird off a wire. It's not very sporting and you might damage the wires or other hardware.

That doesn't mean you shouldn't hunt wires, though. Just set up so you can intercept doves as they come to or from them.

Doves use transmission lines the same way they have used dead trees for centuries before there were wires - both are safe transition zones as birds head to food, water or roost. A dead elm or transmission line located between two of these places will attract doves all morning or afternoon.

Putting it all together

By now, you've figured out that a place that offers grain stubble fields, water and an intermediate resting spot can offer good dove shooting. Charlie Thon's favorite dove spot is near wheat fields. It has a small pond and there's a high-voltage transmission line running through it. The fact that it is near a woodlot where doves roost at night also helps. 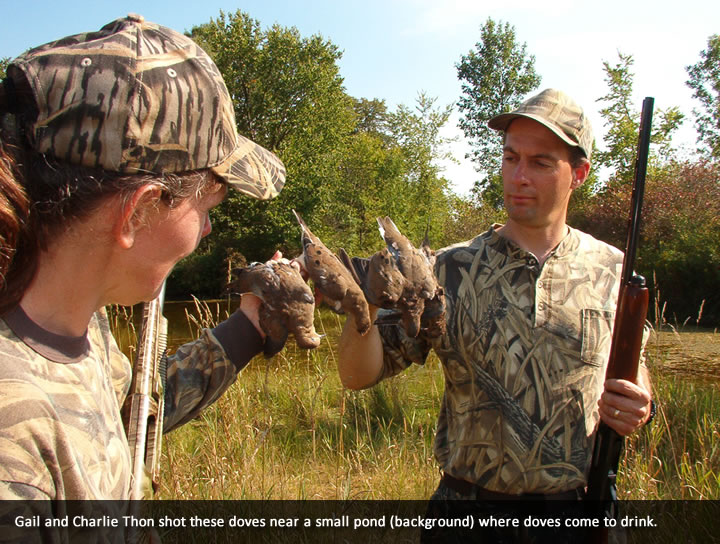 Don't shoot too close to a roost. Local birds will tolerate some shooting near roost trees, but migrating doves will quickly find another woodlot, leaving you watching empty skies.

Locate some grain fields now and spend a few mornings or evenings watching dove flight patterns after they are harvested. With a little luck, you'll find your own honey-hole combo of wheat, water and wires that will provide good shooting in September.

A number of state-owned public hunting grounds have fields planted especially to attract doves. For a downloadable list of these properties and more information on dove hunting in Wisconsin, visit http://dnr.wi.gov/topic/hunt/dove.html.