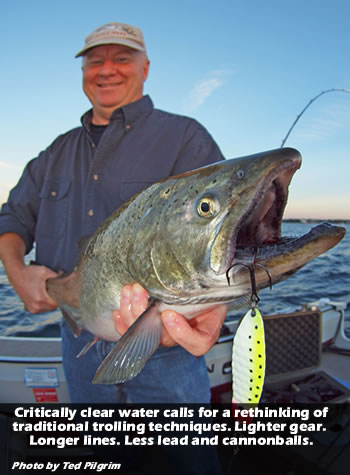 Much has changed within the underwater world the salmon of the Great Lakes swim. Nowadays, it's more than just the common cyclic climbs and crashes in the population of both predator and prey that have sportfishing catches varying year to year. In addition to Mother Nature's natural order is the introduction of a glut of exotic species flushed from the ballasts of freighters from foreign seas.

To say the water quality differs today from when the salmonid families were first introduced into these freshwater seas in the late 1960's is a gross understatement.

One thing that hasn't been tainted, however, are the wicked feeding benders of Chinook and coho salmon. When the moment's right, salmon still gang up and rip through schools of alewives, lake herring and smelt in the upper reaches of the water column.

But fooling these prowlers into striking isn't as easy as it once was. The H2O of all five massive waterways are now more lucent than they have been in decades, and salmon frequently develop noncommittal attitudes when it comes to striking the offerings from anglers stuck in yesterday's ways. Take clipping a lure to heavy line and deploying it directly below the boat via cannon ball and downrigger. While it's still a great way to get a lure where it needs to be when fish are roaming deep, the technique spooks fish swimming high in the water column. As of late, the heavy lead ball approach is being traded for light line trolling tactics.

You don't need a doctorate in biology to understand why there's been a swift alteration in water clarity in these massive waterways, and, why the salmon swimming within them have become pickier.

The newest generations of salmon have reacted to residing in the ever-clearing water a couple different ways. First, both forage and the lures that emulate them are getting noticed by fish from farther away; thus anglers need to realize that even if they are seeing fish on their sonar, say, contained by the thermocline 70 feet down, those same fish have no trouble darting up and whacking a bait 40 feet above.

However, if a lure doesn't have the most natural wiggle or wobble possible to it, salmon will turn tail and head back into the depths.

The key to clear water catching is getting baits out from under your boat and to the sides or as far back behind as possible. Employing lighter-than-normal terminal tackle, too, will allow lures their full, intended stroke.

"I still use downriggers for deep fish, but the reverberation of the cable spooks the salmon up high and they dart off and out to the sides. Because of this, I use long rods or diving devises in conjunction with the 'riggers and double my catch," says Captain Larry Smith of Fish On II Charters, who's been guiding clients in his LUND boat on Lake Superior, out of the port of Lac La Belle in Michigan's Upper Peninsula, for decades.

Two ploys of Smith's take a staggering amount of fish: Running a crankbait off a long line strait out the back of the boat on one side and deploying a Dipsy Diver-and-spoon combo off the other.

While in-line planer boards work wonderfully for pulling crankbaits outside your trolling path, they can also be cumbersome when it comes to reeling in hard-fishing fish like salmon, especially with multiple lines out. Long rods, with a sensitive tip to telegraph the lure's every pulse, combined with plenty of backbone for better hooks sets will take more fish. St. Croix, for example, has both a 10-foot 6-inch- and 12-foot Eyecon trolling rod that salmon tournament anglers are falling for. The tips of these rods reach out and around downrigger booms and keep line from tangling in their cables. And, they were designed for pulling plugs.

Smith's ideal line for trolling cranks for salmon is 10- to 12-pound-test monofilament because of its thin diameter, as well as stretch, which is important for absorbing shock when a salmon jumps. A tough mono, like Sufix Siege, that has superior knot strength yet flows smoothly off the reel is vital for landing these hot fish that twist and flip during battle.

If your reels are already spooled with new, heavier pound test monofilament, you can tie on one of Aquateko's see-through InvisaSwivels and then a 4-foot leader of 10- to 12-pound test Sufix 100% Fluorocarbon leader material. The properties of fluorocarbon (which the InvisaSwivel is also made from) literally make the material invisible in water - perfect for such clear water scenarios.

Smith lets out at least 100 feet (sometime up to 300 feet) of line when long-lining cranks. Rapala manufactures Trolls-To Minnows that dive to 10, 15 and 20 feet on 10-pound test line as well a Deep Tail Dancer that hits the 30-foot mark with 300-feet behind the boat. All the aforementioned have been spied clipped to Smith's rods...

Once his crankbaits are in position, Smith then sets out his spoons and divers. Luhr-Jensen Dipsy Divers not only get a lure down, but can be adjusted so they swing out to one side, increasing the distance from your boat's path.

Dipsys offer a lot of resistance when trolled, so Smith beefs up his main line to 20-pound test, but then uses a leader between the diver and spoon of 10-pound test to allow the spoon to keep its intended action. "I want the spoon to wobble as best it can. That's what gets the fish to hit," he adds. "And the size of the spoon often matters more than the color." Take, Luhr-Jensen's Shoehorn Spoon, for instance, which is stamped in three sizes (3, 4, and 5 inches). Each size represents a different size of baitfish and should be used accordingly to the dimension of the forage the salmon are feeding on.

Hale to the king… salmon that is. And silver salmon, too. If you're looking to increase your catch of either, then remember: Much has changed about the underwater world of salmon within the Great Lakes. The water's getting clearer by the year and thus salmon slyer. Pull crankbaits and spoons on light line high in the water column and outside the pulling path and you'll catch more fish.
Mitch Eagan
Mitch Eeegan has a passion for teaching others about hunting and fishing via the typed word. The accomplished outdoor writer has spent years of merriment ripping smelt lips in Michigan's Upper Peninsula and other prolific smelty regions.
BITS & BITES
Advertise here
Advertise here
Please take a moment to visit our sponsors. Without them we would not be here.