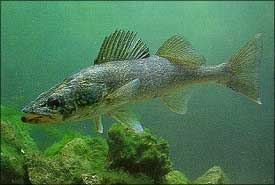 In any lake or river system the type of structure preferred by walleyes most often is a flat. On flats there are no deep pockets, no sharp breaks, just flat bottom areas. On these flats there could be stumps, rock, weeds, timber that will attract baitfish to the area. Spend the time to learn what the flats have on them. The flats will hold active walleyes the majority of the time in a given body of water. Walleyes like consistency. Water temperatures, weather patterns, and abundant food sources. Flats are a major feeding area for walleyes at night, and that makes it a must to fish. As the walleyes become hungry at night, the first place they will head is the flats. Shiners crawfish, young of the year fish all live on these flats as well as Crappies, Bluegills and other sought after pan fish. When they move to the flats at night to feed, the eyes will be right behind them. Their rate of progress to get to these flats can't be judged by a clock. It may take an hour or more after dark for them to move up on the flat. Be patient. The body of water I fish the most at night is the Petenwell Flowage. I have used this very same method on many other lakes and river systems. The" Pete" has many productive flats that produce at night. You need to get a fishing hots spots map or another quality map and find the flats on the map, and then go out and locate these areas on the water and mark them with a GPS. This will help you get back to them at night. Ok, so now you have the map. How do you locate these flats that might hold walleyes. Find deeper water, and then look for wide flat areas closest to the deeper water. So you ask. How deep is a good flat? A good flat can be anywhere from 3-4 ft. to as deep as 25-30 ft. It depends on the lake. On the Petenwell, there are several flats that produce consistently. Find the deep water, and locate the flat areas close to it.

This time of year, walleyes will hold off the edge of the flats during the day, seeking cooler water and come up on the flats after dark to feed .As the water cools the walleyes will feed more often on the flats. Walleyes feed at night mainly because they have the advantage of being able to see at low light to no light. This happens more in Sept and October. It also gets darker earlier as well, so you need to get on the water earlier. The more you can learn about a given flat, the more effective your night fishing will be. Also a bonus to these flats is other fish will be there as well, including MUSKY. 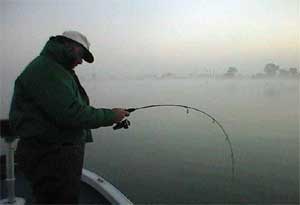 You can catch several species and year classes from one flat. These fish will not be as deep as the walleyes are, or as aggressive but still allot of fun to catch. Speaking of depth. The eyes do not always seek a path along the bottom of the flat to feed on. I have caught eyes suspended less than a foot from the surface as well as a foot off the bottom. The food source will dictate where they will be at on the flat. One thing you want to do if you know where you want to fish on a particular flat is to go over that flats deep-water sides and watch your locator for fish hugging the bottom. They will probably be walleyes waiting for darkness to move up on that flat. So you need to be there as well. I have fished many nights till sun rise the next day and continued to catch eyes until the sun climbed enough to see the shore line .By then the larger walleyes will have started to venture towards the deeper water again. Sometimes they will suspend off the flats over the deeper water until the sun gets higher and the boat traffic picks up. They are still catch able at this time if you get on the water early, and don't spook them by motoring right up to the edge of the flats.

Ok, so now I know where the flat is located and have seen the eyes on the locator so how do I catch them? On a small narrow flat you can cast it with slip bobbers and live bait or you can troll it with crank baits .On a larger flat you might want to troll over it until you locate some walleyes then go back and cast for them, moving slowly using your trolling motor. Large minnow type crank baits work well for me. I normally run 1.5-2.5 mph at night, and have 100 - 150 ft. of line out. Select a large minnow type lure [4 - 6"] with a wide wobble to it. I like to use Rebels, Rapalas, Bomber Long A's, Thin Fins , Thunder Sticks and still my favorite Cisco-kids. I Use a zigzag pattern. If your not fishing alone [which I recommend you don't] vary the depth your lures are running. A tip for you folks is to tape a small cyalume light on your rod tips under side; this makes it easier to see at night. This will come in handy for lifting your rod 2 ft. then let it back down when you're trolling. Believe me these baits are not to big for nighttime walleyes. I have cleaned many walleyes that I have caught at night that have very large shines in there stomachs. So these baits won't scare these fish at all. Ok so I know what to use but what if I can't get the lure down to the depth they are at? What you can do is very simple. You can follow this rule of thumb. One BB split shot set 18" above the lure will increase the depth it runs by a foot. Two split shots will make it run 2ft. deeper and so on. I have also found that most hits while trolling come on turns or as the lure speeds up or slacks off. I hope you folks try this method it does work very well. Keep the net handy. I also want to touch on being quiet. It is VERY IMPORTANT not to make noise of any kind if you can help it. You don't want to spook these fish. No radio and talk in a normal tone if you can. At night the sound will travel great distances so try to be as quiet as possible.

One last thing I want to touch on is SAFETY! At night it is a different world on the water. There isn't the traffic from other boaters, and there isn't the light to see obstacles in the water. I recommend you get a couple of 12 volt Black Lights. Put one in the front and one in the back. If you can afford it put

one on each side as well. The black lights won't attract insects. Keep the floor clear of obstacles and your tackle put away until you need to change baits. Keep your life jacket on at all times. Another tip is to tape a flashlight to the handle on your landing net as this will help in landing those walleyes. Take a cell phone with you if you have one, and bug spray. Get the non-aerosol kind and put it on before you get on the water. I have seen fella's with citronella candles in the boat. I don't recommend this at all. You're just asking for trouble. A fire in your boat at night would not be a good thing. A Spotlight you will want for finding areas along the shoreline and in aiding you in landing your boat. I also have interior lights that can be turned on long enough to re-tie knots. There are several battery-operated lights that can be used as well, like the touch light. There you have it. I hope you give this method a try as it really works great if you do your homework and locate these flats ahead of time. This method will work on any body of water or river system. So the next time you ask yourself what should I do tonight? You now have the answers. PLEASE[C P R] ALL FEMALES!

River Rat has been fishing the Petenwell Flowage for over 40 years and owns Gone Fishing Guide Service and enjoys primarily fishing for walleyes but is well educated on many other species. He is also a Field Editor for Lake-Link.com as well as other sites and is very knowledgeable on the history and fishing tactics of the Petenwell Flowage and Wisconsin River.
TRENDING DISCUSSIONS
Advertise here
Advertise here
Please take a moment to visit our sponsors. Without them we would not be here.