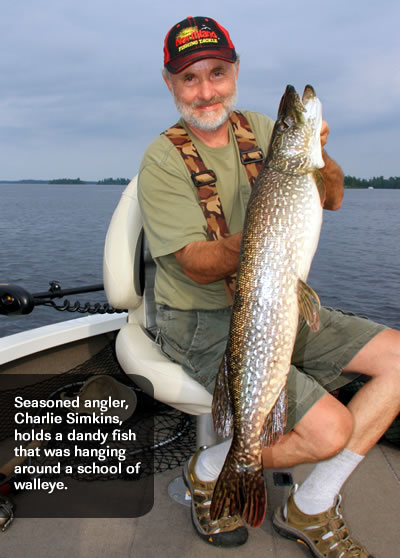 Everyone that has fished a reasonable amount has had a northern experience or two they will never forget. These experiences are broad based and include fish that were caught, ones that got away and the ferocious strikes that can occur when a northern hits a hooked fish you are trying to reel in.

I find all of the stories about quality northern to be exciting and entertaining. However, I am especially intrigued by situations where one finds northern interested in eating your catch, particularly when your catch is walleye!

I can't even begin to count the times when northern have tried to strip walleye off of my hook. In fact, there have been a few cases when the gator was so serious about eating my catch that we actually netted and landed the fish!

The northern - walleye combination has happened enough times for me to realize these toothy critters love to eat walleye. I am convinced they will follow schools of walleye around a lake making them their main food source during the summer months.

When you think about it, this makes perfect sense. Walleye are long and slender and the ideal shape for a tasty meal. Couple this with the fact a northern can easily eat a fish one third the size of their body and you have the makings of a predator - prey correlation between these two fish.

Although it may be difficult to catch northern that are targeting walleye for their dinner, there are a few tricks that may trigger these fish. They are not foolproof methods, but will work some of the time.

I remember a situation on Lac Seul in Ontario when we had northern frequently hitting our walleye whenever we fished one particular reef. Finally, enough was enough and we put away our walleye rods and grabbed out heavy rigs.

After a short dig in my tackle compartment, I came up with a couple of very large, deep diving crankbaits that looked perfect to me. My partner was not so sure as he had never fished with a lure of that stature before.

We set up our trolling run carefully so our baits would be at the optimum depth when we entered the walleye staging area. We pulled two huge gators on our very first pass.

A few years later, I was staying at Caribou Lake in Ontario when one of my fishing cronies described an area where they had been having some northern issues when fishing walleye. I gave him a bottom bouncer and the biggest Rapala I had in my tackle box. After rigging up a heavy leader, he proceeded to go out and catch the largest fish of our trip.

Over the years, Rainy Lake has been another location where we are frequently bothered by big northern attacking our hooked walleye. In an effort to take advantage of this opportunity, we have found that large shiner minnows will sometimes get their attention.

Having toothy northern harass smaller fish is nature's plan. Put a hook in this small fish so it acts wounded and vulnerable, and you will greatly increase the appeal.

Sometimes it is worth the effort to try and trigger these northern and catch 'them' instead of them 'eating your catch.' When this happens, you not only appreciate the power of these brutes, but you also feel somewhat vindicated.

And best of all, you have one more gator story to tell on your next fishing trip!

Jerry Carlson
Jerry started his outdoor career in 1987 when he began writing for Outdoors Weekly. He currently writes about a 130 articles a year for various publications in the Midwest. In addition to writing and giving numerous hunting and fishing seminars, Jerry does weekly radio shows on two St. Cloud, Minnesota stations; WJON and WWJO. He also authored a book called Details for Locating and Catching Fish. Hunting and fishing photos and articles written by Jerry, along with his email address, can be found at jerrycarlsonoutdoors.com. Jerry fishes all species but prefers crappies in the winter and bass in the summer. He also loves to hunt Canada geese in the fall.
TRENDING DISCUSSIONS
Advertise here