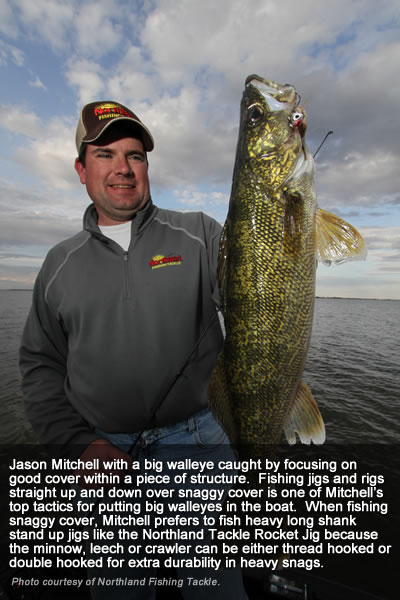 Big fish will typically push smaller fish off of a spot if the big fish want to set up on that spot. Bass fishing is probably the best example of locations or spots that are typically big fish spots because so often, we can readily see what makes a location so attractive. Not all docks for example are the same. Some docks have a better scour hole from a big motor powering up on a boat lift. Docks with wheels or tires might have better structure below the dock that attracts fish for example. A particular dock will produce a big bass and a few weeks later, the same dock will hold a different big bass providing the spot has had a chance to rest. Some rock piles just have the complexity and all the right ingredients to produce several big muskies. Some particular holes or log jams in a specific stretch of stream always seem to produce the largest steelhead or trout. There are lots of spots to fish on most water but regardless of species, there are magical spots that just seem to produce big fish. Walleye fishing is no different but walleye anglers often look at structure much differently than anglers targeting bass or some other species but there are lessons to be learned that can make walleye anglers much more effective at finding big fish in particular. Walleye anglers are typically programmed to look at much bigger spots than anglers targeting other species. We have a tendency to search and look over an entire point for example that might protrude out a hundred yards before dropping off into deeper water. Since walleyes often form fairly large schools on the more noted destination fisheries, it takes a large spot to effectively hold a large school of fish.

Typically as well, a school of walleyes will use several pieces of a particular piece of structure so it pays to fish a spot through. There might be a few fish holding off the deep break of a spot, a few aggressive fish on top and fish scattered in between. I have seen so many scenarios however where big fish will own a particular spot on the spot. There might be walleyes scattered all over a particular piece of structure but the bigger fish will gravitate towards a particular piece of the structure until those big fish are caught and that than gives small fish a chance to rule that roost. Usually, the first fish off the spot will be the biggest and if the fish start getting smaller, it is time to rest that spot and let a few more big fish move in and change their address. Now what kind of spot attracts big walleye? The basics to that question are not that much different to what bass anglers appreciate when dissecting lilly pads or what musky anglers look for when searching for the perfect shallow bay that combines cabbage, sand and rock before dropping off into deeper water. Whenever you can combine several features that intersect into a boat length of an area, that is the sweet spot. Abrupt transitions that provide options are good but throw in good cover into the mix and that often creates the magical big fish location. Now what is cover to a walleye? After all, as much time that walleyes relate to gradual tapering sand and gravel bars not to mention expansive flats, walleyes obviously have a different preference to structure and cover compared to many other types of fish but big walleyes in particular often gravitate towards any type of good cover and that is something that many walleye anglers overlook particularly on rivers and natural lakes where there is typically a lot more good cover options that exist. My favorite big fish locations over the years for walleye are typically snaggy, difficult to fish and often feature either wood snags, log jams, large round rocks or best case scenario… all of these elements on an attractive piece of structure. The mystique of these big fish locations is that on most water, there is not an over abundance of these locations and you have to spend a lot of time on the water to find them. So look for walleyes on structure but look for some type of cover on that structure to target the bigger fish.

Large round rocks are probably the most available cover option on many fisheries. The whole piece of structure might be good and hold walleyes but the piece of the structure that combines some good cover will often produce the biggest fish. Now what constitutes large, round rock? Some rocks can almost be too big in that they don't form the holes and crevices but rock that is perhaps four yards in diameter and height or smaller are typically the best. Multiple rocks this size form deep crevices and shadows where big fish like to lay. On the Canadian Shield for example, there is no shortage of huge chunks of rock but the smaller round rocks provide the optimum cover versus one large rock that is the size of a house. Too small of rocks, say bowling ball size or smaller don't provide the crevices or hiding spots. Another good cover option on some bodies of water and particularly on rivers are wood snags. Again, complex snags that offer good cover in the form of root balls or long spindly branches coming off of larger logs are better cover than a three inch diameter straight log laying on the bottom. These types of locations just described sound like a snag waiting to happen and that is what many of my favorite big walleye spots are… lots of snags waiting to happen. These types of locations are typically very difficult to guide over for example when I have people who don't have the touch to keep from getting hung up or can't retie lines. Regardless of depth or type of structure, the snaggiest piece of that structure often holds the largest walleyes.

These sweet spot locations are typically small and often isolated. With that being said, there are some situations where you can troll over and around these types of snags but the locations often are small enough to dictate a precise up and down vertical presentation to keep the hook in front of fish with some efficiency. On rivers or shallow structure, pin point casting or pitching into the cover might be an option. When fishing cover below the boat, boat control is paramount. Now obviously, a GPS is a tool that is irreplaceable as far as not only remember the locations but finding the x again. Another tool that is often overlooked or forgotten by anglers who use GPS is an old fashioned marker buoy. When working tight locations at crawl slow speeds, A buoy can be much more effective than a GPS plotter in that you have something visual in the water that you can look at and it becomes much easier to hold the boat or slide up and down through a really tight spot that is less than the length of the boat. For dissecting snaggy cover like this, small or hard to see marker buoys can often make you more effective because it forces you to sit tighter to the buoy. Black buoys for example can often enhance your boat control because it forces you to pay attention more. My favorite buoys these days are the little Hot Spot buoys made by Northland Tackle. As soon as I saw these little buoys, I thought, "now why didn't somebody come up with something like this a lot sooner." 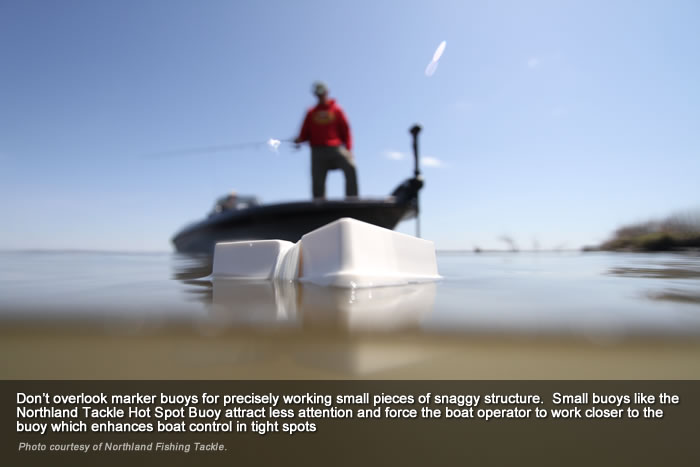 Before structure scan options on our sonar, I typically used a bottom bouncer and short plain snell to learn more about the spot. With the bottom bouncer, I could tell how large the rocks were, how they were shaped, what the wood felt like, where the rocks started and where the crevices were. Bottom bouncers transmit an incredible amount of information helping the angler to visualize the spot. Now with structure scan, I can do a drive by of the spot and pick out key pieces of cover and actually move the cursor around to save an exact way point. Besides fishing vertically with bottom bouncers and short snells, other rigging and jigging presentations work well. A traditional egg sinker fished right below the boat and just a touch off the bottom works really well. Below the egg sinker, tie a short two to three foot snell of ten to fourteen pound fluorocarbon with just a plain size four or six VMC live bait hook. I like the egg sinker as it doesn't seem to get wedged as much between rocks as traditional walking sinkers and I like the durability and abrasion resistance of fluorocarbon for this type of fishing. Hook size can depend on bait but I like to use larger hooks and heavier line just for wrestling big fish up away from the bottom. Typically, I go plain jane on the snells as I know I am going to be retying often and loosing tackle. Jigs are another good option but for really snaggy conditions, I like to find bottom with the egg sinker and hover over the spot with the sinker a few feet up off the bottom. Whether you use jigs or rigs, maintaining boat control so that you are straight up and down is crucial. When I do use jigs, I typically use larger or heavier jigs that fall straight up and down below the boat and make a good thunking noise on the rock or wood. There are definitely times when thunking the bottom seems to trigger fish but too light of a jig just doesn't hang straight below the boat enough to cut down on snags. If possible, try and keep the jig or weight in the cone angle of the electronics. Often, the jig or weight will show up as a line across the screen and when you jig, your sonar will look like a heart beat monitor. You need pretty flat calm conditions usually to keep the jig or weight in the cone angle but having that coordination really helps if possible.

Obviously, big walleyes show up in a lot of different locations through the course of a year and this is by no means the only way to target big fish. Many walleye anglers however, avoid the snaggy locations and I believe they are sometimes missing out on opportunities to stick big fish. As you study structure this season and find schools of fish, make a concentrated effort to identify any type of cover on that piece of structure and fish it. Be prepared to loose tackle and give these locations some time. Many of the biggest walleyes I catch each season are right in the thick of these snags. In fact I don't know how many big fish I have caught over the years where I raised the rod tip and thought I was snagged again only to feel the snag do a head shake and the result was a really big fish. Many walleye anglers appreciate structure but start appreciating cover on the structure and you will catch more big walleyes.