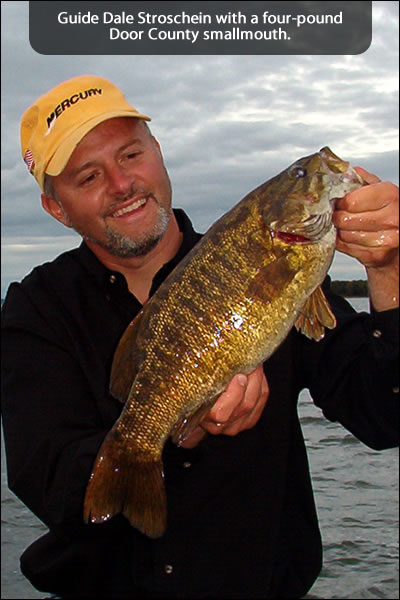 Door County pokes its thumb into Lake Michigan like a hitch-hiker looking for a ride. Between the thumb and the central Wisconsin palm, lie the waters of Green Bay. Along the eastern edge of the thumb, rock outcroppings and sheltered harbors define the rugged coastline of Lake Michigan. The Door Peninsula offers hundreds of miles of shoreline, more than any other county in America. Most of it is smallmouth water.

Until recently, smallmouth bass took a back seat to the Door's other fish species. Brown trout, Chinook salmon, northern pike, perch and walleyes have traditionally drawn anglers to the Door Peninsula. The bass have always been there, but new regulations and the rise of the catch-and-release ethic have helped boost both numbers and the size of the average smallie to where a lot of anglers now come here specifically to catch bass.

Smallmouths are doing well in the waters surrounding Door County, according to DNR Lake Michigan fisheries technician Tim Kroeff, who has been studying the impact of exotic round gobies on smallmouths. Kroeff and others have observed gobies taking eggs and fry from smallmouth nests, but he believes male bass do a pretty good job of defending their nests.

Bass in the 17- to 19-inch range and quite abundant. Kroeff's surveys have found bass up to about 16 years of age. There is some concern among DNR staffers and local citizens about the overharvest of large bass during the pre-spawn and spawning periods, and some people have called for more restrictive regulations. Smallmouths here spawn from about May 20 through June 25, and males guard the nests well into July.

These rules, which reflect the variety of Door County's waters and conditions, are one reason the county has such good bass fishing. The other is that most bass anglers today practice catch and release throughout the season. As a result, the bass keep getting bigger and more abundant.

Most anglers release all the bass they catch, regardless of the rules. Because they are most vulnerable when spawning, Tim Kroeff urges anglers to lay off the bass when they are on the beds. In some areas they spawn so close to shore that it is easy to see them in the clear water.

When, Where and How

Where you find rock, you'll find smallmouths. Since most of Door County is essentially the top of the Niagara Escarpment, there is ample structure within a block or two of shore practically everywhere. Some places, however, hold more bass than others. Look for areas where shallow rocks are close to deep water. Crayfish and baitfish hang out in the shallows, and bass like to be able to feed and then slide into deep water to rest.

Water temperature also plays a significant role here. Smallmouths are not very active until the water warms up into the 60s. Currents and winds keep cold and warm water moving around, so one stretch of shoreline may have warmer water and thus more bass one day, but not the next. The sun warms shallow, protected bays long before adjacent shoreline areas, so bass action is often hot in the bays earlier in the season.

Steady summer weather patterns and abundant sunshine generally mean Door County waters will offer good bass fishing from early July well into September or later. And if conditions are not good on the Lake Michigan side, you can usually find better fishing on the Green Bay side, or vice-versa. 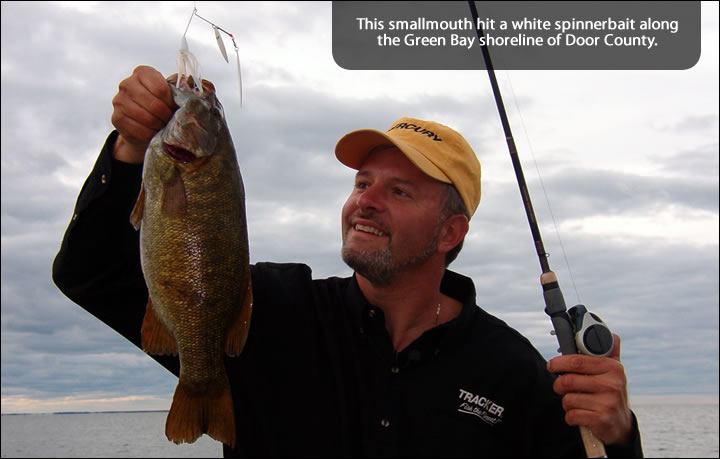 Jigs and plastics bounced off rocks or danced down a stair-step contour are a good choice. Big spinnerbaits slow-rolled over shallow rocks will take bass when they are active. Casting crankbaits can be a good way to find bass, since you can quickly cover a lot of water this way. Walleye anglers also catch their share of smallmouths, both jigging with live bait and trolling crankbaits over reefs and along shoreline structure.

Most guides will tell you that 20- to 40-fish days are not unusual, and they are not exaggerating. I have seen this kind of action while fishing with three different Door County guides. It's usually just a matter of finding fish, staying on them and giving them what they want to hit.

You'll find smallmouths at scattered points along the Green Bay shore from the Door County line north to Sherwood Point at the mouth of Sturgeon Bay. The rocks off Chaudoir Dock County Park hold bass, and you can launch at the public landing there. Guide Tim Dawidiuk showed me a couple productive stretches back in the late 1990s. We motored south out of Sturgeon Bay and worked quite close to shore for a half-mile or so, then moved to another similar spot, catching bass on spinnerbaits and jigs.

Little Sturgeon Bay, Riley Bay and Sand Bay are topnotch smallmouth spots early in the season. I fished Little Sturgeon in June several years ago with guide Fritz Peterson and caught dozens of bass up to 14 inches a couple pushing three pounds.

Later in summer, the bass move to deeper water off Henderson Point, Riley Point and Snake Island. The bottom drops off rapidly to 20 or 30 feet here and there are plenty of rocks. Larson's Reef, a series of rock humps that run northeast from Snake Island for nearly five miles, is another good summer smallmouth area. You'll catch perch and walleyes mixed in with the bass. Guide Dale Stroschein and I fished the shallow rocks along Snake Island in October a couple years back and caught some dandy smallmouths on big spinnerbaits.

Sturgeon Bay itself has a ton of bass structure, although recent low water levels have hampered access to some of it. There is good early-season action on rock and gravel structure off Cabot Point and the entrance to Sawyer Harbor. In early summer, try Dunlap Reef, the Stone Quarry shoreline area and "The Flats" along the north shore of Sturgeon Bay. Fritz Peterson and I picked up some nice smallmouths on a recent summer outing by tossing crankbaits and spinnerbaits on The Flats.

From Sturgeon Bay to Northport, there is more bass water than you could fish in a lifetime. In calm weather, try the offshore sructure of Monument Shoals, the unnamed reefs off Horseshoe Bay, Sister Shoals or Horseshoe Reefs. Closer to shore, you'll find good bass action at the Murphy County Park dock and at Egg Harbor, Fish Creek, Eagle Harbor at Ephraim, Sister Bay and Ellison Bay.

You can camp and fish right from shore at Peninsula State Park, or take a short boat ride to the rocks around the Strawberry Islands or the Sister Islands, which offer great bass fishing in midsummer. Gill's Rock, Hedgehog Harbor and the ferry dock at Northport produce some big smallies in fall, especially along drop-offs in 15 to 20 feet of water. Fishing here is best when currents bring warmer water from the bay to the lake side.

The Lake Michigan side of the county has plenty of structure, too, but water here is colder and the bass less abundant. Bass action also starts up later in the summer. The Mink River and Rowley's Bay produce some dandy fish. Look for bass along the rocky shoreline of the bay and up in the river. North Bay, Moonlight Bay and Bailey's Harbor offer sheltered structure that holds bass. Try the scattered bulrush beds in North and Moonlight bays. South of Bailey's Harbor, bass fishing gives way to trout and salmon.

Many guides offer bass fishing trips as well as trolling charters. To contact Dale Stroschein, of Sand Bay Beach Resort, call (888) 879-5548, or log onto sandbaybeachresort.com. For Tim Dawidiuk, call (920) 746-9916, or log onto fishdoorcounty.com. To fish with Fritz Peterson, call (920) 743-7877, or long onto jefishing.com. For information on lodging and other area facilities, contact the Door County Chamber of Commerce, (800) 527-3529, or log onto doorcountyvacations.com.