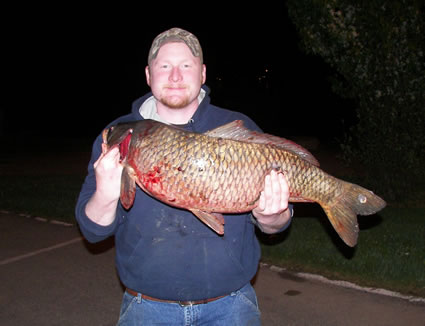 It was over twenty years ago when the Delavan Lake rehabilitation project occurred. The project was to reduce the phosphorous level in the lake, which grows the weeds and eliminate the rough fish population. It was a huge success making Delavan Lake one of the best fisheries in the state. Like all things, over time, things change. Once again Carp have arrived to the ecosystem, not in enormous numbers as before, but enough to hunt them with bow and arrow (bow fishing). In Wisconsin it is legal to shoot rough fish with a bow and arrow. A rough fish is an undesirable fish species that is seldom eaten such as suckers, carp or bowfin to name a few.

I recently had the opportunity to try my hand at bow fishing with hunting guide and owner of Lakeside Bait and Tackle, Brad Mikrut. Lakeside Bait and Tackle is located just across the street from the Delavan Lake boat launch. With our busy schedules, we decided to chase the carp after dark. We met at the launch at 8:30 pm as the sun was setting. Bow fishing at night is much more productive for three reasons. One is that the boat traffic is almost non-existent. Secondly, there is no sun glare so the fish are easier to see and finally because the fish aren't as easily spooked.

Early summer is Brad's favorite time to hunt for carp, the fish are shallow spawning and the lake water is some of the clearest of the season. The night was cool with very little wind. With the water still, it makes seeing the carp easier. The water clarity was also very good. If it had rained recently the water would be too murky to see the fish.

Brad's boat is rigged with six halogen lights which really light up the darkness. The lights are run off of a generator. It can be a little loud, but the generator that Brad uses is an expensive one so the noise wasn't too bad.

We ventured out around Memorial Day weekend when the carp were still in the shallows spawning. We worked a water depth of 1-6 feet on both hard and mucky bottom. Being a fisherman and not a bow hunter, I didn't shoot into any hard bottom to break Brad's arrows. Brad explained that arrows are $4-$5 and he will always take the shot. Mud flats seem to produce more fish however the water clarity isn't always as good as hard bottom locations.

We started hunting in Brad's "carping ground" near the Delavan Lake Resort and slowly moved around with his electric trolling motor. It wasn't long before we spotted a huge carp in 2 ft of water about 10 ft from the boat, well within range. Brad drew back and wacked it. I was amazed at how hard it fought with an arrow through it. To retrieve the fish, the arrow has a line on it and you hand over hand the fish back to the boat. This is very similar to battling a fish on a tip up. The tip of the arrow has a flared end which goes into the fish but doesn't pull out. Once in the boat, you unscrew the tip of the arrow and remove the fish from the arrow. Into the barrel the fish went. At this point, I had to ask, "What do you do with them?" Brad smiled and said, "You should see the size of my tomato plants!" Apparently carp are great fertilizer for the garden. 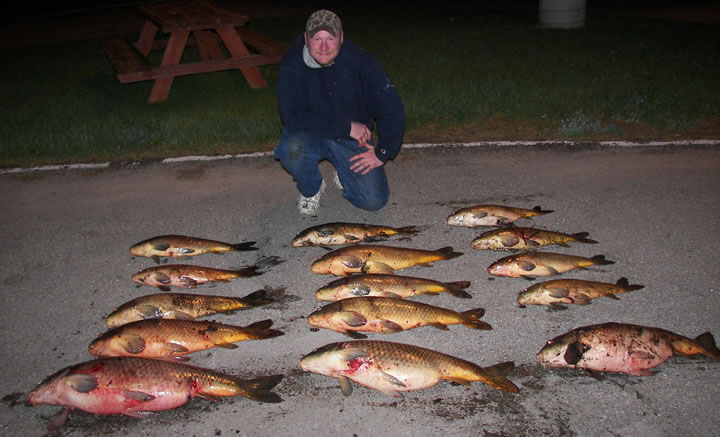 It was amazing to see all the fish in Delavan Lake at night. The halogen lights were so bright it was easy to see the fish in the water. People on shore must have wondered what the heck was on the lake and thought they'd perhaps had one too many.

In short order, we had fish number two, three and four in the boat. Brad couldn't miss. I played a lot of rugby in my younger days and my shoulders don't do bows well but I did try it though once Brad told me the draw of the bow was only 30 lbs. I questioned his manhood of course with only using a 30 lb draw, but he explained quite thoroughly that I should try pulling a bow back a couple of hundred times a night and see for myself what it feels like! Being in really shallow water you don't need any more arrow speed than what 30 lbs provides anyway. If we were in deeper water a heavier draw weight would be required, due to the deflection of the arrow hitting the water and moving through it. The bow I was using didn't have a sight, it was all instinctive. Because of the refraction of the light and your eyesight, you need to aim lower on the target than you think. After about 10 shots, I finally hit one and into the barrel it went.

After I shot one, it was time to head back home. I was guiding early the next morning and Brad had to open the shop at 5 a.m. Before you head out on the water, make sure your municipality allows the discharge of an arrow. Some local ordinances prohibit it.

For current Lake Delavan reports or to book a bow fishing hunt, contact Brad Mikrut at 262-725-7007 or check out the website at www.lakesidebait.com