By Gilbert Arndt - September 1, 2001
It was a warm, late August afternoon in northern Wisconsin, and I had been sitting over one of my active baits since 4pm. I was hoping to videotape a large bear,with a 5 1/2 inch track,that had been hitting two of my baits in this area! It was now 6pm, and judging by the calm attitude of the porcupines, and pine squirrels,this was going to be a prime evening to see bear!!! 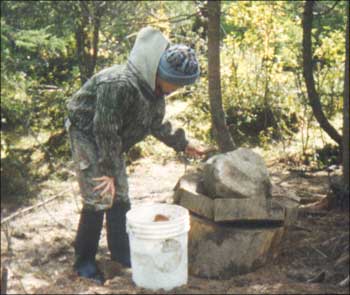 SUDDENLY,everything was still,and like most "Big Bruins",I saw him below me,before I heard any sounds! The first thing that stands out when you see a bear in the wild, is just how Black the are,compared to their surroundings! The large boar stood below my tree stand,surveying the bait before approaching, oblivious to my presence.As soon as he started to "open" the bait,I switched on the camera,and videotaped this Blackie devouring the "sweet offerings", I had put there just hours earlier! I estimated his size at 300lbs,which later proved to be on the low side...

Most novices, new to bear baiting, think all that is needed is, a pile of bait in the woods,a stand, and they will harvest a bear. After being involved with this sport since the early 80s, and being fortunate enough to harvest a bear, all 3 times I received a permit, I know that alot of time,money, and hard work are involved! The first step,especially for a guide, is to start obtaining bait, sometimes as early as March! As I average 10 clients per season, this involves alot of bait. Our primary bait is bread,doughnuts,buns, and pastries,to which we add liquid sugar,or corn syrup.This season, I will most likely go through thirty,55gal.drums of bait, thats alot of loading and hauling bait!

Once you have secured a bait source, now you must find good bait sites.For me it's not as difficult, as we have established baits,that we use year after year.Of course things such as logging can change areas, so I am always on the lookout for new bait sites.The two main features I look for are,remote areas, and natural food sources.Bears like thick,rugged,swampy terrain,preferably near water,and the darker the better! The reason for this being,bears are black, and need to find areas to stay cool during hot weather, and also being reclusive, they like darker areas for cover.So these dark areas also cause bears to be more likely to hit the baits during shooting hours.This brings us to the second feature, natural food sources.When the berries, and choke cherries are ripe, this is where the bears will be! Check old logging roads,and clearcuts in remote areas, as these usually have good stands of berry bushes. If you find such an area,near a large wet swamp,you have a great bait site!

Now that you have your bait site, what next? In Wisconsin the only legal container for bait in the woods are hollow stumps,but most stumps are rotted wood, and the bears would tear them apart in 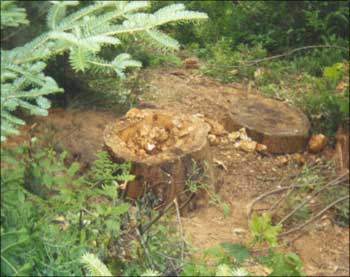 a couple days. This would then leave most of your bait at the mercy of the "Little Critters" (Pine Squirrels,Porcupines, Ravens,Chipmunks,and Raccoons) who will rob the bait before the bears get there! My solution is to find freshly logged stumps, only a year old or so,and hollow out the inside.When you first start the bait, leave the stump open, so the scent of the bait can get into the air, and the "Little Critters"can drag some bait around leaving a scent trail.Another trick I employ,is to pour corn syrup on the nearby trail.The animals get this "sticky stuff" on their feet, and wherever they travel,they leave a scent trail to your bait! After the bait is being "hit", I cover the stump with a large rock, so only a bear can get it open to get at the bait.

Okay,now you have an active bait,but how big are the bears, and are they coming during legal shooting hours? To determine this,I employ trail timers,hauling in sand around baits to get tracks, and calculate estimated size of bears, and of course ,videotaping bears on the baits before season. Another trick I use to estimate size of bears at my baits, are claw marks on trees. I pick a tree by the bait, too small to climb, and I place chocolate, or corn syrup, as high as I can reach on the tree.As I am 6 feet tall, any bear that will leave claw marks as high or higher than the bait,will surely be a large one! If there are cubs around, the claw marks will be considerably smaller, and all the way up the tree,as the climb to get the sweets.As for tracks in the sand, usually any track measuring 4 inches or more across is a shooter, and anything over 5 inches is a trophy! Trail Timers help determine when bears "hit", but I also like to "sit" my baits, and videotape, before the season. This not only lets me 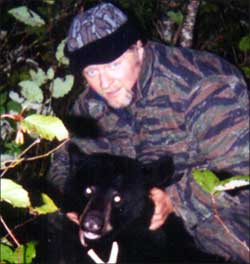 see the actual bears, but also lets me see his habits, and make last minute adjustments, which are critical for bowhunters.Another factor that is helpful when videotaping,the bears become accustomed to human presence in the stand, and lose fear of approaching when the hunter is in the stand.

As you can see there are alot of little things that can contribute to the success of a bear hunter, but most require time, and hard work! One last tip for those of you who don't have the time to sit your bait before the season: take an old hunting shirt and wear it to get your scent on it, then tie it to the tree by your stand,to look, and smell as if you are always in the stand.(This tip cannot be used on public lands,as it is illegal to leave stands up overnight, and also could be considered littering,always check local regulations).

Well Good Luck in your Bear Baiting,OH I almost forgot to finish my story! The reason that I later knew I slightly underestimated the bears weight, at 6pm, on opening day of the 2000 bear baithunting season,the big bear returned right on schedule, and my client, on his first bear hunt, harvested a 380lb bear!!!

Good Luck in the Great Outdoors!

Gilbert Arndt
Besides being Field Editor for Lake Puckaway on Lake-Link.com, Gil Arndton the Primos Pro-Staff, a freelance outdoor writer, videographer and hunting and fishing guide, with almost 20 years experience hunting bears. Gil owns and operates Lone Wolf Guide Service & Outdoor Videography which offers bear hunts, turkey hunts, waterfowl hunts, fishing on Lake Puckaway, as well as videotaping hunts, fishing ,or promotions for outdoor products or businesses. You can contact Gil at (920)394-3138, or email at [email protected].
TRENDING DISCUSSIONS
Advertise here
Advertise here
Please take a moment to visit our sponsors. Without them we would not be here.