By Mitch Eagan - June 1, 2012
Contrary to popular belief, the vibrations and gyrations of bodybaits (aka crankbaits) often prevail over the standard spin, flash and roll of conventional metal

Cast. Troll. Fish them high in the water column or low. Tie on a bodybait and ply any of the Great Lakes for trout and salmon and you'll often have the upper hand.

Spoons, spinners, flashers and flies are standard issue anywhere trout and salmon swim. It's not that the aforementioned don't catch fish. But contrary to popular belief, the vibrations and gyrations of bodybaits often prevail over the standard spin, flash and roll of metal lures. This is especially true when the bite is unpredictable. 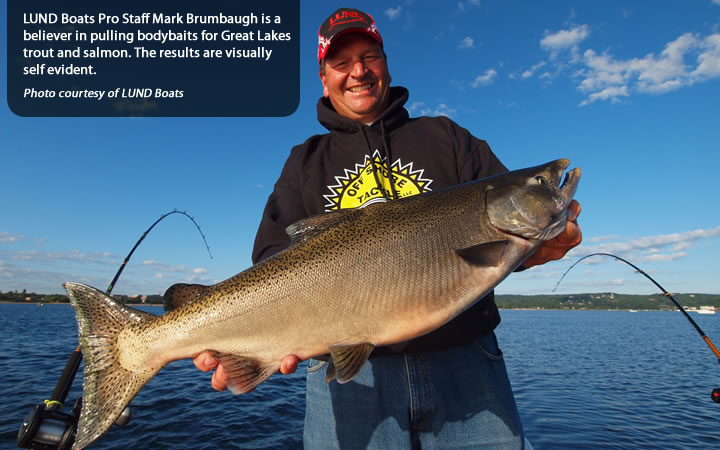 But not all bodybaits are created equal. What they're constructed of as well their shape and dive curve are determining factors in whether your cooler's filled with fillets or just leftover ice for an elixir to drown your fishless sorrows.

The technicalities of water temperature as well the speeds you fish have more to do with selecting the right bait than anglers realize. This is where a bodybait's makeup and shape come into play.

Like all fish species, trout and salmon are coldblooded creatures, their core at one with the water temperature. Muscles stiffen when it's cold and fish move at a slower pace; not only are they unwilling, but sometimes unable to chase down a lure fished too swiftly. The opposite holds true as water warms. Fish in the salmonid and char families are triggered by lures ripped at a rapid rate over ones fished at a relaxed rhythm.

On average, bodybaits poured of plastic have a wider waggle at slower speeds than those crafted from balsawood, making them a better choice in cool water. Wide wobblers are winners when trolled or cast and retrieved at 1 to 2 mph. Lures lathed from wood, on the other hand, have a tight wiggle that works wonders in warmer water. These natural baits can be fished effectively - true to their intended action - at rates up to, even beyond, 3 mph.

However, the above theory has fortuitous-flaws when considering certain baits. Take the narrow, straight-sided shape of Rapala's Flat Rap. Its body is fashioned from balsa and runs tight like Rapala's Original Minnow. However, the Flat Rap's flashing flanks give the lure intense wobble, even when fished at a snail's pace. The deadly bodybait flashes like a Blue Fox spinner, but can be fished at various speeds and still remain steady in the water column-unlike a spinner that will drop at slower speeds and rise to the occasion at higher ones.

At times, shorter, stubby-bodied lures appeal to trout and salmon over long, slender ones, and vise versa. Again I'll use the shape of an Original Minnow, say, over that of a Storm Original ThinFin for illustration: The former is a good choice if smelt, herring or gobies are the main forage, the latter for matching the shape of shad. Yes, matching the shape of a lure to the native forage often makes a difference, too.

Overall, whether you're casting or trolling bodybaits, vary the speed until identifying the preferred pace. Anglers are quick to change color, size, shape and action before experimenting with speeds

First it was zebra mussels. Now the quagga. Both species of invasive clams have created quite a calamity in the Great Lakes. The water clarity in all five treasured waters is greater than ever before. And this has changed the way anglers must work the water to catch fish.

When trolling, getting your lure out from behind the boat's churn and wake is of the utmost importance. And when casting, the farther your lure is zinged the better.

Downriggers, of course, will get a lure to the desired depth. When fish are on or above the thermocline, in-line planers are all the rage. These devices pull bodybaits away from the motor's froth and right to where they need to be.

Activating the right rods for the planer-board job is crucial as well. St. Croix's full line of Eyecon rods are perfect for in-lines; there's even a 12-footer for when you've packed the trolling lane with boards, yet have room for a bigger spread. The positively long rods allocate extra lures without running them right behind the boat. 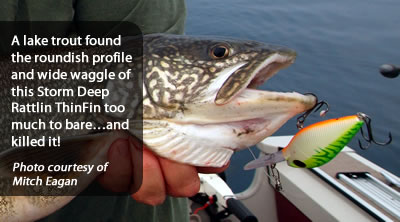 Masking fishing line is another quandary in clear water. Using a monofilament that is easy enough to see is key to sensing strikes before the reel's drag rips, but at the same time, the line must be invisible to fish. That, and thin enough in diameter so as not to impede a bodybait's action.

One ploy I learned from Great Lakes salmon and trout scholars is fishing monofilament line that's soft (able to absorb the shock of a strike) and easy-to see, such as Hi-Vis Yellow Sufix Elite of at least 12-lb test. To the tip of the mainline they tie on an InvisaSwivel-made of a fluorocarbon based material called Fluoro-Clear, which is clear and adds a degree of stealth to the rig-and then a 4-foot fluorocarbon leader at least 2-lbs lighter than the mainline.

When pulling bodies, it's also best to use a small snap (not snap-swivel) rather than tying directly to the lure. The open ring of a light-wire snap grants the lure its full, intended range of motion and won't wear at the eyelet, causing break-offs.

What hue of the rainbow you choose for fishing bodybaits is a personal choice. (We all have our favorites.) But as a general rule, lures that emulate the natural colors of baitfish are preferred. The latest ploy for fooling fickle fish, however, are baits coated with ultra-violet paint, such as Storm's "UV Bright" lures, which reflect more light and are easier for fish to zone in on, particularly during lowlight conditions.

Shake, Rattle, but no Roll

Looking to lock horns with more Great Lakes trout and salmon than ever before? Then why not give bodybaits a crank. Cast. Troll. Hurl them from the pier when fish are pushing shoreward. You'll soon discover that your standard spoons and spinners have new roommates in the tackle box.
Mitch Eagan
Mitch Eeegan has a passion for teaching others about hunting and fishing via the typed word. The accomplished outdoor writer has spent years of merriment ripping smelt lips in Michigan's Upper Peninsula and other prolific smelty regions.
BITS & BITES
Advertise here
Advertise here
Please take a moment to visit our sponsors. Without them we would not be here.