Sex and Violence in the Spring Woods

By Dan Small - May 1, 2012
Eddie Salter, the Hunters Specialties turkey guru from Evergreen, Ala., once described spring turkey hunting as "the All-American sport."

"It's all about sex and violence," Salter said. "That old gobbler thinks he's about to make love and you're there to try to kill him."

Salter's salty tongue was not tucked into his cheek when he shared that observation 25 years ago during a seminar at the Milwaukee Journal Sentinel Sports Show. Salter pared spring turkey hunting down to its bare essence. Without sex, there is no spring hunt. Without violence, there are no dead turkeys hanging at the end of the day. 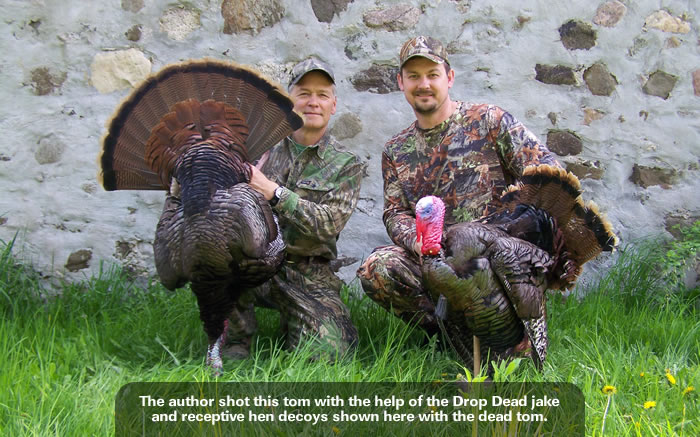 Turkey hunters would do well to remember Salter's characterization of their sport because it helps simplify what has become a very complicated activity. It's easy to get so totally wrapped up in scouting tactics, locator calls, camouflage patterns, shotgun chokes, shot sizes, decoy placement, topo maps and all the other turkey-hunting paraphernalia that we can overlook the most basic ingredient of the hunt: if what we're doing does not translate into turkey sex in the pea-sized brain of a gobbler, the odds of doing him any violence are downright slim indeed.

In 25 years of spring turkey hunting, I've tried just about everything with moderate success. I'm as big a sucker as the next guy for the latest call, but I usually fall back on one sweet-tuned box and one waterproof pot that between them will make every call a hen can utter, in just about any weather.

I've shot everything from fours to sixes in lead, steel and high-tech non-toxics stuffed into shells up to 3 1/2-inch cannon loads and have found that they will all kill a gobbler dead at 35 yards if you put the pattern on his head. Actually, my old pump gun likes a diet of 2-3/4-inch, 1-1/2-ounce, buffered copper-plated sixes best.

Ditto for chokes. I've got four different tubes for that gun labeled "full" or "extra full." A gunsmith friend put a micrometer on them all. It turns out the most open of the bunch throws the best pattern. 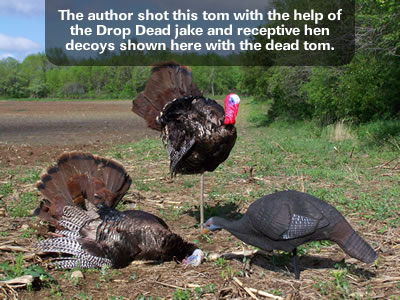 Decoys, however, have had me stymied. Until a couple years ago.

I've tried sets consisting of one, two, three and more rigid-bodied, soft-bodied, inflatable, shell and silhouette hens, toms and jakes, some so realistic I've had to count them to make sure a live bird hadn't sneaked into my set. Some were mere suggestions of a bird, but they, too, sometimes worked. One guy I know killed a monster tom that strutted for a black plastic bag wrapped around a cornstalk!

Almost any decoy combination will bring in a tom if he's in the right mood, and almost any set will just as surely scare him off if he's not. At least a couple of things can put a tom in the wrong mood. Like getting his butt whipped by another bird, or maybe getting shot at by the last guy who used the same decoy set-up you've got. The set up I have settled on consists of one jake and one hen.

I've tried various combos of jakes and hens before, from a standing jake between two hens to a "breeding pair," all with mixed results.

Several years ago, though, I tried a strutting jake and a receptive hen and killed two birds in two days. The decoy was actually a real jake mounted in full strut. Any wind ruffles the bird's feathers, adding a touch of realism.

That round, black ball of a bird in strut can be seen from a great distance. And the "notched" tail of a jake is unmistakable.

Troy Piotrowski, who operates New Life Taxidermy in Amherst, loaned me the decoy after he and his friends have used it to kill a pile of toms. Along with it, he sent a DVD of his early-season hunts. Piotrowski is marketing his mounted decoys under the name "Drop Dead Decoys." You can reach him at (715) 824-5902. His website is www.d3turkeydecoys.com.

The strutting jake/receptive hen combo works so well, I believe, because it triggers an aggressive response from just about any tom. Even the lowliest of adult toms will kick a jake's butt.

A jake struts when he thinks he can get away with it, usually in front of a lone hen without an adult tom nearby. A jake in strut showing off for a hen that is ready to breed is like a puny freshman trying to cut in on a senior quarterback's hot date.

In that human scenario, the stud busts the freshman in the chops. The same thing happens in the turkey world.

It boils down to the most likely combination to make any tom - even a two-year-old that's been knocked silly by every other adult tom in the woods - throw caution to the spring breezes.

It's simply a matter of sex and violence: "I'm not getting any action, so I'll be damned if he's getting any," seems to be the reaction of every tom I've seen that walks into this set-up, both the birds I shot and those on Piotrowski's DVD. My first bird strutted for 200 yards across corn stubble, following two hens that came to check out the decoy.

My second bird came in with two buddies. When he attacked the decoy and knocked it on its nose, I shot him, then watched as one of his pals spent 20 minutes beating up his dead carcass.

The strategy with this set-up is simple: place the decoys a few feet apart in an area with birds, call just enough to get a tom's attention, then let the strutting jake draw him in close enough to shoot. The image of a jake about to get lucky seems to be enough to seal the deal. 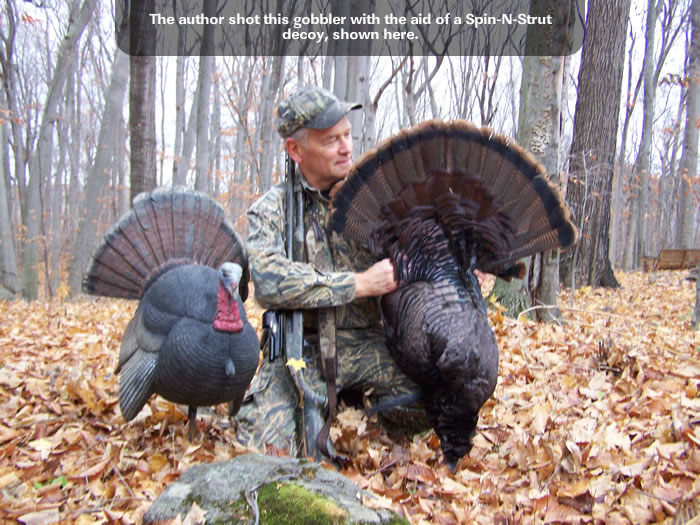 Just when I thought my experimenting was over, I found a new decoy that takes the strutting jake concept one step - or spin - further.

The Spin-N-Strut jake decoy turns 90 degrees and lifts its tail from half to full strut when you pull on a cord. Release the cord, and a cam spins the decoy back a quarter turn and drops its tail to half-mast.

According to Ken Davis, president of Timothy Creek Decoys in Rock City, Ill., "The decoy's realistic motion is what makes it so effective." Check it out at www.spin-n-strut.com.

In the last few years, I've used Davis' decoy with great success. I've just got to remind myself to keep it simple: sex + violence = dead turkey.