Rethinking the Trolling Game for Walleyes 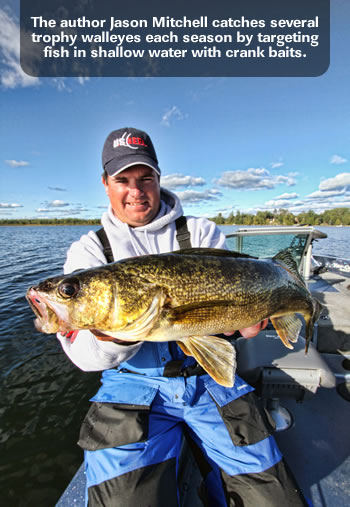 Trolling for walleyes used to be regarded as more of an intimate affair. The boats twenty or thirty years ago were typically much smaller so we sat closer to the water. Before specifically designed trolling rods and line counter reels, crank baits were often trolled with low profile bait casters or spinning reels. All an angler needed was a six foot medium action rod. Line was watched, lure vibration was felt (even with monofilament) and a person who trolled every night could calculate how much line to let out and where to pump the rod tip to create the perfect trolling pass.

Fast forward a few years and trolling for walleyes transformed. Multiple rod spreads are desired. Most anglers would be lost without line counter reels. Anglers are running braided lines, lead core line, snap weights, inline planer boards and even dipsy divers or jet divers with the goal of running as many lines or lures as legally possible in an organized fashion. This trolling mentality has entered the psyche of walleye anglers to the point where some of the lessons get forgotten.

On many fisheries, there are situations where running multiple lines (if legal) and combining all of these tools make you a much more deadly walleye angler but early in the season in shallow water, holding on to one spinning rod and concentrating on making just the right pass will often catch me more walleyes.

How can a spinning rod compete with line counter rods? You will never know where you are at, is the typical response I hear. Here is the deal, early in the year when we are trolling less than seven feet of water or trolling after dark, I don't have to necessarily let out an extraordinary amount of line. After dark, I am often only running the lure down about three or four feet. During the day, I might typically run the lure a foot above the bottom. Trolling shallow is really as simple as a short cast, medium cast or long cast. The cast however is the advantage. Most people cannot flip a stick bait very far with a line counter level wind reel… especially upwind. With a spinning reel, an angler can ease into a spot and flip the lure out behind the boat and immediately start fishing. Lures can be picked up faster and cleaned of debris and flipped out behind the boat faster. This speed of getting the lure out behind the boat and back to the boat allows you to fish much tighter spots and this really becomes apparent on river systems where long runs were traditionally regarded as trolling spots and tight seams and troughs were considered live bait spots. In shallow water in the spring or after dark all season long, we are typically pulling over the tops of emerging weed beds so being able to work a lure over the tops of the weeds without fouling up and being able to clean the lure off quickly when the lure does foul up is greater efficiency that means more time in front of fish.

Anglers often experiment between stick baits and shad profiled baits and both lure profiles have their place in walleye fishing. The biggest lesson I have learned from my years trolling is to keep forcing yourself to try and retry different things. Don't live by the fishing rules so many anglers are quick to throw at you. Matching the hatch for example is a joke with walleye fishing. Many walleyes for example have never seen a night crawler or fire tiger minnow. Force yourself to switch between shad profiles and minnow profiles and let the fish tell you. Some fisheries seem to show certain preferences towards a specific size, color or profile but be careful not to get so hung up on something that you have no confidence doing anything else. I have worked with Salmo for quite a few years and have caught a tremendous amount of walleyes on the Salmo Suspending Stings but the size 4 and size 5 Salmo Hornets can be deadly as well. Other great shallow water trolling lures for walleyes include the classic floating Rapala and Husky Jerks. Smithwick Rattling Rogues can also be great but are not tuned as well. Size 5 Rapala Shad Raps in both deep diver and shallow runner are great lures. The Berkley Flicker Shad is a solid lure. There are many lures that work well and in the real world outside of promotional fishing, an angler is going to have several different lures in the box and good anglers are going to have four or five go to lures that they know will catch fish.

I am not a big color fanatic but there are a handful of color schemes I like to experiment with. I like to test gold versus silver and I also like to experiment with basic white/ dark back lures along with chartreuse or fire tiger patterns. The rest however is a confidence game. There are specific funky color patterns that just seem to have an aura on a specific fishery and most people are going to fish better with more confidence if they run some of these lures. Often, color of lure confidence prophesizes success because anglers catch the most fish on what they have in the water the most and that often boils down to confidence.

"I am not a big color fanatic but there are a handful of color schemes I like to experiment with. I like to test gold versus silver and I also like to experiment with basic white/ dark back lures along with chartreuse or fire tiger patterns. The rest however is a confidence game..."
Over the past fifteen years, I have embraced braided line for this shallow water hands on trolling and really like Bionic Braid. Braid has a few advantages like better sensitivity that seems to help distinguish fouled up hooks on stick baits better. I use braid whenever possible but for some reason, there are times when the fish just seem to hit lures on monofilament better. Depending on the water, six to ten pound monofilament can be the ticket. Maybe the lures run higher, maybe the snap or flash on the lure is more subdued, maybe the fish can see the braid, I don't know why but there are a few situations where mono just flat out fishes braided line. I probably use braided line seventy percent of the time but usually have a rod rigged with mono just to experiment with from time to time. We designed a couple of spinning rods for our Jason Mitchell Elite Series line up that are perfect for trolling. Go to www.jasonmitchellrods.com and check out both the seven foot and seven and a half foot medium light fast action blanks, both are perfect for working these lures.

Most of the time, pumping the rod or playing with the rod tip to get the lure extra flash and vibration seems to trigger fish especially when the lure comes to a stall or stop. When trying to replicate what is working, you not only have to pay attention to the cast or how much line you have out but also where you keep the rod tip. Holding the rod tip high will raise the lure when you have more line out of the water. Keep your rod tip at a consistent position but don't be afraid to work your lure over structure with the hands on coordination like a jig fisherman would use.

Holding one rod, trolling shallow water is as intimate as live bait rigging or jigging and can be such a deadly technique for not just learning water or finding fish but also triggering big fish. Particularly after dark, this shallow trolling pattern can produce enormous walleyes all summer. During the day, target bays and flats with your temperature gauge, look for warmer water. On sunny days, don't be afraid to fish high in the water especially if there is wind. Other top locations include shallow gravel shoals, rocky shorelines, rip rap and any protected shoreline where there are emerging stands of cabbage or coon tail that is close to deep water. A general rule of thumb early in the season is that hard bottoms often fish better with wind and weeds often fish better when there is no or little wind.