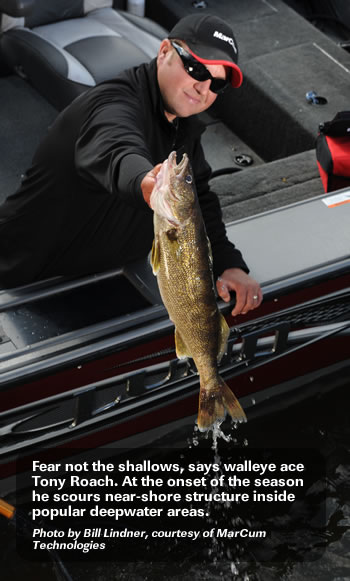 Written in conjunction with Tony Roach

Springtime arrived earlier this year than maybe anytime over the past century. It's been a truly remarkable season of prematurely warm weather - not that we're complaining. But even the old-timers, who were around to fish the Original Rapala Minnow, can't recall another year like this one. Melting ice ended the frozen water period almost before it started. Warm sunny March, April and May days warmed the shallows rapidly, injecting the water with virtual espresso shots of activity. With remarkable climatic conditions like these, it's no wonder that anglers have been left scratching their heads, wondering aloud and to themselves: How will the walleyes respond?

Thankfully, the answers are resoundingly positive. As water temperatures have ascended rapidly to spawning temperatures, oodles of walleyes bred, recovered and resumed feeding heartily much earlier than usual. How early? In aquatic locales from South Dakota to Minnesota and east into the Great Lakes region, walleyes procreated as much as a month earlier than in a 'normal' year, if such a thing even exists...

But what's equally as surprising are the numbers of fish feeding in the shallows. How shallow? Let's just say that the fish are swimming in water scarcely deep enough to shroud their dorsal fins. It's all about food. And so long as you employ a lure and technique that matches their preferences, catching quantities of walleyes is a whole lot easier than you probably think.

When people tell Tony Roach that jigs and soft minnow shaped baits don't work on traditional livebait lakes such as Mille Lacs and Leech in Minnesota, or even on Canadian lakes or those in the Dakotas, the professional walleye guide patiently and politely listens to their rationale. Inside, Roach smiles because he's just docked the boat, having seriously rocked the walleyes on select artificial baits.

Although Roach Rigs, jigs and floats with livebait are springtime staples, during at least the first month of the season - and again in fall - Roach's Lund lurks near shore while he pitches plastics. Here, amid shallow 2 to 10-foot rock, sand and vegetation zones, he and clients unleash artificials, often setting hooks mere seconds after jigheads splash. Roach calls it the most electrifying bite of the year. And with results like double and triple headers, as well as hookups on consecutive casts, it's no wonder.

The shallow soft bait bite isn't always a cinch, of course, but it's not cranial surgery, either. "The most difficult thing about catching shallow walleyes in most lakes," Roach says, "Is the mental hurdle of fishing that shallow - seems like a leap of faith. Anglers assume the shallow plastics bite only happens during super brief windows - like for only a few days in the spring. But on big lakes with good walleye populations, or just about any lake with dark water or lots of real estate under 20 feet deep, the shallow bite can be absolutely hot. I'm always amazed by how many people are out on the breakline, busting their hump moving slow with livebait, while watching us net fish after fish on plastics."

At seminars and at the dock, Roach instructs his angling brethren to start by fishing near structures where multiple boats ply deeper water nearby. "If I see a bunch of boats working along a windy breakline or weedline in 15 to 25 feet, rather than getting in line with everyone else, I'll slip up inside them and start pitching one of my favorite jig and soft minnow combos."

"It only takes a few minutes of casting to determine whether or not you've got active fish," Roach says. "You'd be crazy to pass up the opportunity, or to at least not give it a try before moving on."

Presentation itself isn't complicated, although Roach has found that walleyes prefer certain jig/softbait combos. Start with a baitfish-profile jighead that sports a "keeper" or barbed baitholder. VMC offers some of the finest shallow water instruments available, including the Smoochin' Minnow Jig and mushroom shaped Finesse Half Moon Jig - both accept and lock in place most softbaits. For aggressive shallow water jig-ripping, Roach deploys 1/4- to 3/8-ounce VMC or Northland jigheads, each paired with what he considers the "anointed bait," a 3.5-inch Trigger X Paddle Tail Minnow.

To propel and present one of these little swimming morsels, choose a 6-1/2 to 7-foot medium action, moderate to fast action spinning rod, such as a St. Croix Legend Tournament Walleye Snap Jig rod (LTWS68MXF). Roach also uses his newly designed Wright & McGill walleye rods, pairing each with 10-pound test braided Sufix 832 line. "Soon as the bait splashes down," Roach instructs, "engage the reel's bail and use the rodtip to feel it collide with the bottom. Immediately give the bait a good rip. Be ready, too, because that's when walleyes often crush it."

From there, Roach continues an aggressive jigging routine, sweeping forward with short 4 to 8-inch rodtip thrusts, followed by one to two second pauses. "Walleyes in shallow water make quick decisions, so being aggressive is nearly always better," he says. The baitfish shape of the Trigger X Paddle Tail Minnow, which is driven by its hard thumping posterior, provides walleyes with a dual visual / lateral line stimuli that makes the lure an easy and obvious target. The outcome, says Roach, is to the angler's advantage. "Walleyes absolutely destroy these baits."

While jigs give Roach the utmost in control, he's got one other trick up his sleeve that can, at times, yield amazing results. "You think jigs and soft minnow bait combos are shunned by walleye traditionalists? Try casting spoons. People think you're crazy. But in the right situation, spoons can be the best thing going."

When working vast stretches of tempting shallow water, or in bigger winds, dirtier water or for fishing fast over submerged vegetation, spoons such as the Luhr Jensen Cast Champ are supremely enticing options. The Blue Fox Flash Spoon and another one called the Tasmanian Devil are additional winners that cast like bullets and throw out strobe-like baitfish flash. Although many anglers perceive spoons as old school wares, their underwater personality is as lively as a wild shiner.

Roach says that working a spoon isn't terribly different from that of a jig-softbait. Cast, and then after letting the spoon flutter to the bottom, give the rodtip a sharp upward sweep. Pause again, allowing the spoon to flutter and flash. Or to cover broader expanses of water, simply execute a straight steady retrieve, using less frequent pauses. "Spoons are known to be deadly through the ice," Roach adds. "Everyone gives up on them when lakes open up, though. "

Everyone, that is, except the walleyes."