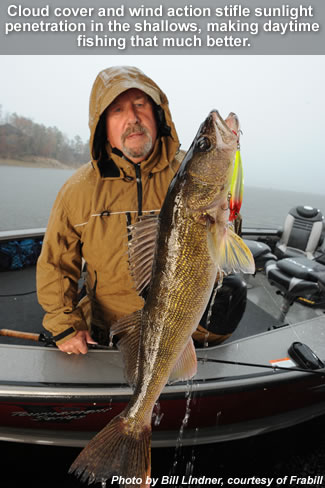 Walleyes are flexible, their lives spent adapting to ever evolving surroundings. This opposed to the fact that many walleye anglers are inflexible, set in their ways. Such was the case fishing alongside friends and relatives as a punk kid who should be happy just to have a seat in the boat.

Those formative years were banked on Lake Geneva in Southern Wisconsin fishing with my Dad. We fished for bass, northern pike, muskies, and panfish during the day - walleyes always reserved for sundown and the wee morning hours. My Dad insisted that you couldn't catch walleyes during the day. Locals supported this stubborn stance claiming that walleyes only bit at night or under lowlight conditions, and held a strict diet of baitfish.

I was infinitely frustrated by the thought of only being able to catch 'eyes under so-called 'ideal conditions,' when sunlight was limited and minnows in masse. Instead of succumbing to the area gospel, though, it motivated me to disprove the diehards.

So began a lifelong mission to understand the territorial preferences of walleyes throughout the day, the season, even imagining where they'd be feeding when I was stuck back home doing chores. And I held this gut instinct that walleyes not only fed by day, but also much shallower than believed, and ate pretty much anything the lake served.

I always knew, too, that walleyes exclusively roam depths of 10-20 feet - that's what I was taught, anyway. Since then, I've pinned walleyes in depths ranging from scarcely a foot to nearly 100. So much for the depth range stereotype.

It was, and still is to this day, the ultimate challenge to find and then cream walleyes in the hyper-shallows. First, an angler must trust the fact that walleyes do inhabit depths under 6-feet of water. That means a willingness to commit more than a few casts before bugging out.

Also, you need the grit and dedication to experiment with presentations. Jigging is the easy choice, and continually effective. Dragging a slip-sinker and minnow is standard fare, too. But are you mentally prepared to hurl or troll a crankbait all day? Snap on a Rapala Shad Rap - a perennial menace to walleyes - and there's a real chance of outfishing the boat. Crankbaits, in my opinion, are severely underutilized in shallow situations, especially early in the season.

Admittedly, we do have tools that are forefathers did not. I rely on electronics, as well as time-honored instinct, to know when I've entered fertile shallows. My Humminbird 998 with Side Imaging exposes weedbeds, rock piles and wood. Such structures add gravitational pull to a shallow water bite.

And then there's wind. Give me a 48-hour blow into shallow structure and I'll show you a limit of spring walleyes. Truthfully, the fish-finding-formula needn't be any trickier than that. Wind + structure + baitfish that have been pressed shoreward and are feasting on zooplankton = walleyes.

Technology rears its head again, too. LakeMaster High-Definition Mapping divulges shallow contours that I might have otherwise run over blindly. With it, I can spy slight changes in depth that cause walleyes to congregate. And, with mapping, I can return to these locations time and time again.

Like second nature, I start pitching jigs and minnows. The action and cadence of the combo ranges from a slow waltz to a hard rock slam dance, the speed and rambunctiousness of the retrieve dictated by the mood of the fish. Start fast, feather back as needed. 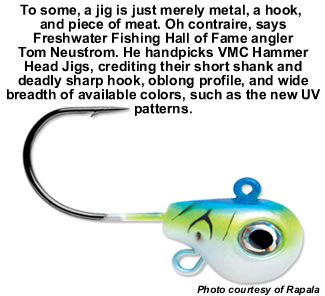 My top jig for strafing the shallows is a VMC Hammer Head. A killer sharp hook, short-shank, and oblong body (causes the hook to angle slightly upward) make it an unbeatable vessel for moving minnows around the shallows. Sometimes, snapping a jig and soft body bait does the trick, especially for larger fish. A VMC Mooneye Jig with either a Trigger X Minnow or Swimming Grub make perfect pairings. The longer shank and bait-holder barb on the Mooneye Jig provide the ideal foundation for grabbing onto and presenting soft baits.

To this, even during a 'minnow bite,' I keep at least one combo pre-rigged with a jig and plastic. The broader, faster presentation can sometimes activate the heaviest walleye in the pod.

Crankbaits can have the same effect, playing to the likings of larger walleyes. A slow reel, stop, and twitch gives the Rapala Husky Jerk a famous action that often rolls early season walleyes. When I want to pick up the pace and zip over the tops of cabbage and shallow rocks, it's time to un-holster the Rapala Clackin Rap and new Rippin Rap. The neurotically wobbling, lipless crankbaits load the water with mesmerizing sonic reverberations, catalyzing reactive strikes.

Lure performance is maximized by employing quality gear. The Daiwa Aird 2000 throws jigs like the wind's always to your back - the more economical Daiwa High Speed Exceler 2000 and Ballistic 2000 aren't far behind. Casting distance is further enhanced with Sufix 832 Advanced Superline, an epic quality braid. Fortified with Gore® Performance Fibers, Sufix 832 is as sensitive as a raw nerve ending and remarkably abrasion resistant. You can literally feel a jig tumbling over bottom rubble, not to mention short nipping walleyes.

Fortunately, more often than not when walleyes inhabit the shallows, short strikes aren't of great concern. Shallow fish, even those with shallow personalities, tend to be assertive, sometimes downright rude - pushing and shoving to eat the jig first.

I can't go back in time and share these shallow water discoveries with my Dad, so I'm hoping you can pull out a tip and enjoy battling a walleye at high noon when everyone else is napping back at camp.