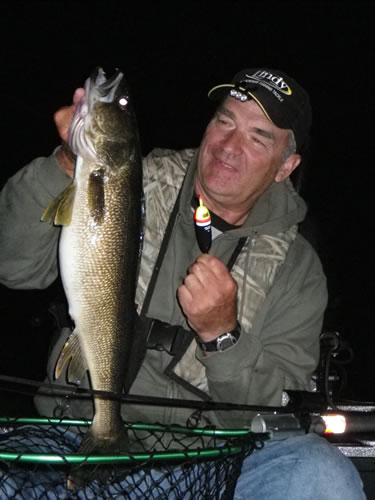 Northwoods guide Greg Bohn has fished for walleyes at night since he was 7 years old.

His uncle, who owned the old Woods Motel and Resort in Arbor Vitae, would drive him to a dock or a pier so he could fish well after dark. Sometimes he'd ride his bike if he couldn't catch a ride. After a few hours under the moonlight, he'd usually head back home with a nice stringer of walleyes and panfish.

Bohn kept right on fishing after dark when he became a professional guide about 35 years ago. He realized the vacationers who wanted to fish in one of the hundreds of lakes around Minocqua were often too busy during the day with family to wet a line. Working men and women had jobs when the sun was up. Fishing at night offered hours of fun without taking time from other obligations.

But there was another reason Bohn loved fishing what he calls the "3rd shift." He and his clients are having breakfast after a night of setting hooks on fish after fish while other guides are getting ready to face a hard day on the water with tough conditions. While other people battled the dead-calm blazing-hot dog days of summer, he and his clients were home asleep after catching walleyes in the cool of darkness.

They usually catch lots of them. Some are the fish of their dreams.

"I'm having breakfast when the other guides are going out. We've already caught 40 fish and they're looking at a flat calm day," Bohn said.

"Lighted Slip Bobber Warning: night fishing can be addictive. The image of thousands of walleyes becoming active at sunset after a day in deep water or holding tight in the weeds to escape the sun can fire up the imagination..."
After logging 10,000 hours of night fishing by 2011, Bohn decided to share what he's learned in his just-released "Master The Art of Night Slip Bobbering: 3rd Shift Walleye Secrets!" It's his second book in the Mastering The Art of Slip Bobbering series written with Scott Richardson.

"Our average night is about 30 fish," said Bohn. "There's no way you're going to do that during the day unless there's perfect conditions. Most of the walleyes are 14- to 18 inches. But fish up to 15 pounds have been caught during the peak feeding times after dark, and it's not uncommon to have a 7- to an 11-pounder on any given night. I am actually surprised if we don't catch a big fish, what you would consider a trophy from 24- to 28 inches."

Lighted Slip Bobber Warning: night fishing can be addictive. The image of thousands of walleyes becoming active at sunset after a day in deep water or holding tight in the weeds to escape the sun can fire up the imagination.

"There's something mesmerizing about watching a lighted slip bobber, slip under the water and then come back toward the boat as you fight a fish," he said. "It's become such an obsession, I don't sleep at night. Even when I'm not booked for a night trip, I want to be there because I know what's going on.

"What better way to catch walleyes than with live bait under a lighted slip bobber? I've tried to out-fish lighted floats with jigs or with lures. Can't do it."

Bohn seems to have a sixth sense to predict when the best bites will be on any given night. But there is a science to his methods. Using charts that plot the motion of the sun and the moon and weather forecasts, he times the sunset and sunrise, the moonrise and set and the arrival of clouds or stormy weather to be in the right place at the right time. He's found that weeds give up the most fish, "a sure thing," he said, but they tend to be smaller than the walleyes that haunt hard-bottom structures. You may get far fewer walleyes fishing mid-lake humps and shoreline bars, but the ones you get are trophies worth losing a little sleep. 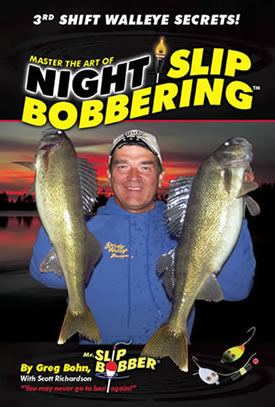 His approach isn't solely for insomniacs willing to stay up all night. Bohn nets walleyes while the red taillights of the trucks and boat trailers are still visible at the ramp or when trucks are showing back up next morning. People are loading their boats and arranging tackle boxes while he's netting the best fish of the day. He knows the catch rate of the average evening angler would soar if they would just learn to use lighted slip bobbers and stay on the water a couple of hours longer in the evening or arrive a couple of hours earlier in the morning.

New technology has opened night-fishing to far more people than in the past, he said. In the old days, he had to wrap the head of slip bobbers in tinfoil or prism tape so they'd shine when he pointed his flashlight their way. He was in heaven when Lindy Legendary Fishing Tackle started to paint the tops of their bobbers with paint that would glow and reflect light. Fuji came out with lighted bobbers. Lindy entered the market with Nite Brite floats. More recently, they offer models like the Splash Brite slip bobber that turns on when they hit the water and turn off when they are taken out to extend the battery life.

Those advances add to a number of tweaks Bohn made to the common slip bobber rig that he and Scott outlined in the first book and discuss again in the new book. Bohn uses the thread style bobber stops to avoid damaging line. He uses rubber core sliding sinkers instead of split shot pinched on the line for the same reason. He's fine-tuned the use of glass beads and he's figured out the best terminal tackle to make a rig that is both attractive and strong so it won't cause him to lose trophy fish. He knows what hooks to use with what blades and he's developed his own line of "3rd Shift Glo-Bugzzz Jigs to draw fish close and present minnow, leech or 'crawler in a way that entice strikes.

He's refined the presentation to the point of offering different set-ups to address different conditions from cloudy to moon, no moon, and everything in between. One of the most insightful chapters discusses how to "charge" baits with natural or artificial light to match the natural illumination the moon provides or the lack of it. "The only way you can accumulate that kind of information is to spend 10,000 hours on a lake or buy the book," Bohn laughed.

Greg's book is available in the Lake-Link Outlet.