By Brian "Bro" Brosdahl - April 1, 2012
While most boats leave the landing in pursuit of other popular sport fish, I slide aside and pounce on perch

Historically, perch have been known as "the other fish." You can see it within livewells throughout the Midwest. Walleye anglers are more than happy to keep a clutch of jumbos that happened to be mixing with their primary quarry; crappie catchers aren't quick to release a stray 'eater' that wandered onto the area, either; even hardcore bassers will find the time to fill their livewells if enough jumbos reach the hook on their soft plastics.

I, however, search for perch on purpose.

I prepare ahead of time by specifically gearing up for them, and shake loose all temptations to chase other hot bites. It's all because I know once perch enter the post-spawn era-the calendar reading May and ready to flip to June-the entire perch population goes on a feeding bender. 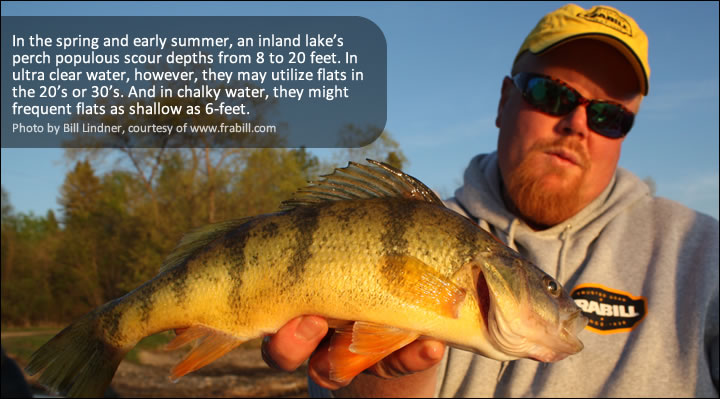 Seek and yee shall find

The zones in which perch are active are generally spacious. Primo perch spots, however, depend on the characteristics of a lake, food and cover.

The presence of walleyes is often a good indicator of perch whereabouts. However, don't limit yourself to an acutely defined walleye spot. I frequently encounter the fattest perch near, but not intermingled with their bloodline-brethren. While walleyes, for instance, might merely clip along the lip of a break leading down a flat, perch on a feeding binge would rather swallow-up and run the flat.

In general, an inland lake's perch populous can be found in depths from 8 to 20 feet. In ultra clear water, however, they may utilize flats in the 20's or 30's. And in chalkier water, they might be found on flats in only 8 to 14 feet.

What are other chief determinants, you ask? Food and cover. But during the late spring and early summer graze, it's obvious feasting comes before fear because you can jack perch from flats featuring nary any hideaways from predators.

Take the presence of chara grass (actually an algae); it offers a classic example. The crusty, vein-like algae forms twisted beds over shallow gravel flats and offers very little protective cover for perch. In it, however, juvenile crayfish and baitfish find assumed asylum. Perch are wired to nose into the labyrinth and root out the forage. Chara-oriented perch are motorized pod feeders that roam, so don't expect to drop anchor and whale on 'em for hours here.

Flats featuring "out with the old and in with the new" vegetation are perch pathways when water temperatures eek into the 60s. Winter's brown and down cabbage and/or coontail is giving way to replacement greens. Like chara flats, spans of these newly emerging greens play host to perfect-for-perch sized crayfish and baitfish.

More than once I've filleted a limit of perch where every single gut popped with the flesh and skeletons of micro-bluegills and perch. Baitfish often take on the form of George Washington-quarter-sized bluegills and Fritoes® length perch, originals not the scoops. Perch feast on both. 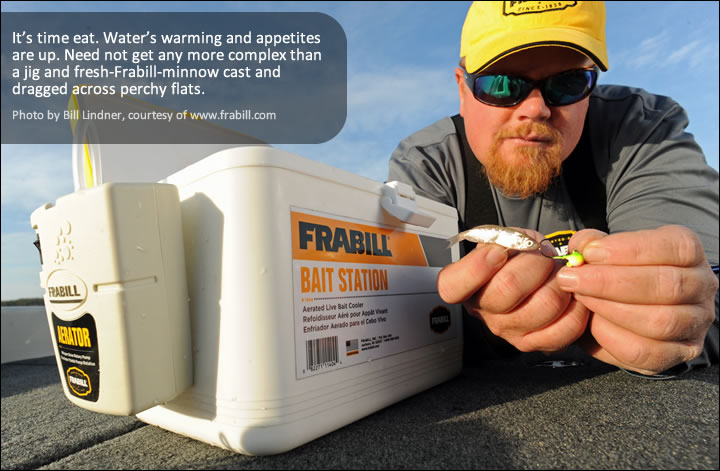 Some flats sport emergent weeds, like hardstem bulrushes. A blend of bent and broken stems supported by new life poking through the surface combine to offer perch both cover and a seemingly endless food supply. Besides baitfish and crayfish, the aquatic 'farmer's market' contains bloodworms and other soon-to-be airborne insects still in their aquatic form.

The fact of the matter is the fish are feeding with reckless abandon and will consume whatever that particular lake has to offer.

The shape of a flat and how it interlaces with nearby basins are just as important as the associated cover.

Case in point: how walleyes tend to fixate on where a flat juts into deepwater, say, the tip of it, while more often than not, perch will curl back to where the point originates from the flat, especially on inside turns.

Random depressions and trenches across a flat are the ally of perch odds-makers. Take a flat that stabilizes at 10 feet deep, and then toss in an area that scoops out at 12-feet. I can tell you, the divot is right where the majority of the perch will be concentrated. These troughs collect more debris than the surrounding area, which means more matter for invertebrates to roll in, and perch to stop the fun and games.

The flats perch roam can be massive; some a hundred-plus acres. With this in mind, you must search with purpose and determine as quickly as possible what type of cover they're using.

Nothing is more effective than when I drop my bow-mounted Minn-Kota trolling motor and machinegun-cast jigs to cover water. This is when I'll fix up a 1/32- or 1/16-ounce Northland Fireball Jig with a live minnow. To surprise short-strikers I'll clip off the end of a minnow's tail and hook it through the mouth and straight out the back of its head. The tail-less minnow gets just as much attention as a whole one and fools fickle fish with a hook in their jaw.

On calm days, I'll pattern perch by slow trolling with the bow-mount electric while watching my Humminbird for fish; even more so its Side Imaging for cover and baitfish. Often, in shallow water, I might not mark fish, but will at least get a snapshot of the terrain. If it has the right ingredients, I'll drop a waypoint on my GPS and come back to it and cast.

In choppy water, I'll utilize a controlled drift; the trolling motor used to control boat speed and position. I'll drag the jig when the wind's up and navigate it through the weeds. When the cover is superb and surface roiling, I'm oftentimes able to catch fish directly under the boat.

Whether casting or trolling I "weaponize" with a 7-foot St. Croix Panfish Series rod. The length takes up line with authority for sweeping hooksets. During a drift, however, I shorten to a 6-foot model from the same Panfish Series.

Willing to forgo a hot bite to catch perch? I don't blame you. Just remember to cover water on flats adjacent to deep-water main-lake basins after the fish have spawned and you'll find plenty. Concentrate on where the fish are feeding, be it weeds or depressions in the bottom, and you'll more than likely find the mother lode.