The Deep Adjustment for Walleyes

By Jason Mitchell - April 1, 2012
We often find walleyes at late ice in shallow water. We often find walleyes at some point each spring in shallow water. Walleyes typically spawn in shallow water and there are all kinds of reasons for fish to be shallow early in the season. Warmer water, the right bottom composition for spawning and enough memories from catching fish shallow in the past makes looking deep early in the season hard for many anglers. Yes there are going to be many patterns happening in less then seven feet of water on many fisheries early in the season and these shallow locations are a great starting point especially when water temperatures start to climb and the weather is stable but across the board on many fisheries, deep fish are often overlooked and sometimes easy to catch. There is a point at late ice when there is a lot going on in shallow water and of course at some point during the spring, the activity picks up in shallow water but what throws some anglers off is that there seems to be that in between time when deeper breaks and structure holds most of the biters. 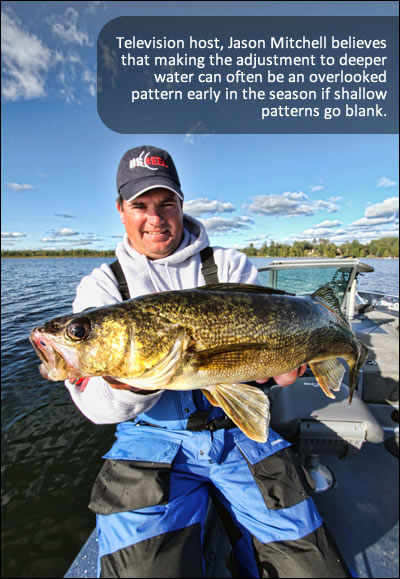 If there are good numbers of nice fish in deep water early in the season or near ice out, what happens between the shallow late ice patterns and the shallow spring patterns? Do fish move back and forth? Every fishery is different and each ecosystem seems to produce unique patterns but there definitely seems like on many fisheries, either the fish do shift back and forth or there are certain populations of fish that are on a different, deeper program.

I have talked about transition fish before and one thing I often notice about fish that are on the move and making huge movements is the color of the fish. Transition fish often get paler in color while fish that have been set up on one location for a while often seem to get more darker and vibrant colors. Obviously fish color is relative to the water but when fish get pale, it seems to be from being on the big move. I am speculating that environmental stressors and the stress of covering massive amounts of ground stresses the fish just enough to cause the fish to loose some color like how a fish that is stressed in a live well can loose some of its luster for color in a few hours.

The bottom line is that walleyes in particular can really move especially early in the season between when the ice goes out and the spawn begins. I have watched fish on underwater cameras and they just rolled through about as fast as a person walks. There fins are down and when they get in migration mode, they are about impossible to catch. You feel like you are invisible with your lure.

The question I still have is what would make walleyes reposition from say the back end of a shallow bay on a nice gravel shoal at late ice to a massive main lake deep water point shortly after ice out? What would possess fish to make that journey when a week later after the water temperature stabilizes and climbs, most of the fish are on the shallow shoreline patterns where we think they should be? It could also be entirely possible that we are dealing with two different populations of fish as well. Biologists often point out that Mother Nature is good at spreading the risk. With both shallow and deep fish, spawning attempts are staggered in different parts of the lake with primary and secondary patterns happening at once. There might however be some time of biological advantage however for a walleye to just drop back into deep water at ice out momentarily. The reason I believe this is just because there are so many baitfish clouds over deep water at this time. Depending on the fishery, could be schools of shad, smelt or some other baitfish but we see this so often. Now the walleyes might be set up on these locations eating these baitfish but there might be more to it. The big question I have is why are the baitfish over deep water? I would think that there would be more for baitfish to eat in shallow water. The only explanation I can find is that the deeper water might be more stable at this time. I don't have all of the answers but I do know this, don't ever be afraid to look deep on spots early in the season when there isn't any activity up shallow.

The best part about deeper fish is that this activity will show up on your electronics. The baitfish clouds and everything else will show up. Now deep is relative but on many lakes and reservoirs, we have found fish anywhere from twenty to fifty feet of water when they make this deep shift. On Lake Sakakawea in north central North Dakota where I spent a lot of time fishing when I was growing up, we often found sauger in really deep water at ice out, any where from thirty to sixty feet of water. I am still amazed at how many walleyes we caught at times from those depths. We see the same deep patterns save us on Devils Lake at times. Particularly during adverse weather when fishing is tough, we can often salvage a day sitting over deep fish.

Much of fishing is knowing when to hold and when to fold. There is something to be said for patience and there is also beating the dead horse. Right away in the season, don't be afraid to slide out over much deeper water and fish structure and spots that are far away from shallow water locations when the horse is dead.