The action begins in late summer or early fall on some streams and runs into May, and the season is open year round. Check the Trout Fishing Regulations Guide for details.

In midwinter, you can have nearly any stream to yourself. The steelhead you find in the rivers now are mostly dark fish that came up last fall and have spent several months in the deeper holes. Sometimes, you can coax one into taking a fly or spawn sac. If it is not too lethargic, it will make a couple good runs.

Any warming spell or significant precipitation will bring new fish up from the lake, however, and these bright steelies will scream through a run, test your tackle and leave you breathless, but eager for more.

Once the run starts, water conditions vary from river to river, even from day to day. High, discolored water makes it tough to find fish and present a lure properly. Low, clear water makes fish skittish and hard to approach. If you can see bottom in the shallow runs but not in deep holes, conditions are perfect.

Local tackle shops are often the best sources for information, as the word gets out fast once the run starts. The Steelhead Site online at www.steelheadsite.com posts information from tackle and techniques to stream flow data and current fishing reports on Great Lakes streams.

"Every steelhead angler loses fish. A steelhead may sulk or go ballistic. Most fresh fish do the latter. One of the joys of the spring run is that it offers lots of fresh fish, so you'll get plenty of practice fighting them..."
Spinning and fly gear both will take steelhead. Experienced flyrodders can do well on steelhead, but beginners may find them frustrating.

Most spawn fishermen use a long (nine- to 14-foot) spinning rod, a reel with a smooth drag and six- or eight-pound-test monofilament. The longer the rod, the lighter the line you can get away with.

Tie on a single egg hook, clamp on a couple split shot and set a balsa float so the bait bumps along just off bottom. Use this rig to drift spawn sacs through deep runs to take holding fish. A long rod lets you keep more line off the water and extend a drag-free drift for many more yards.

Hardware fishermen opt for a seven-foot rod and the same reel spooled with eight-pound test line. To work a spinner in holding water, cast upstream and across and retrieve at a speed that will keep the blade ticking bottom. Cast above fish in riffles and on redds and let it swing down in front of them. Some anglers let wobbling plugs swing in the current in front of holding fish, a technique developed on West Coast rivers.

Fly-fishing for steelhead requires a seven- or eight-weight rod and floating line. You'll also need a reel with a good drag and a palming spool. Add as much 30-pound test backing as the reel will hold. To get flies down to the fish, you can clamp on split shot or add a twist-on lead strip to the leader, but this concentrated weight makes casting difficult. For better casting and a more natural presentation, loop a short "lead link" between the line and leader. Make your own lead links by splicing a loop at either end of a section of lead-core fly line, or buy them ready made at fly shops. Carry an assortment of lead links for different depths and current speeds. 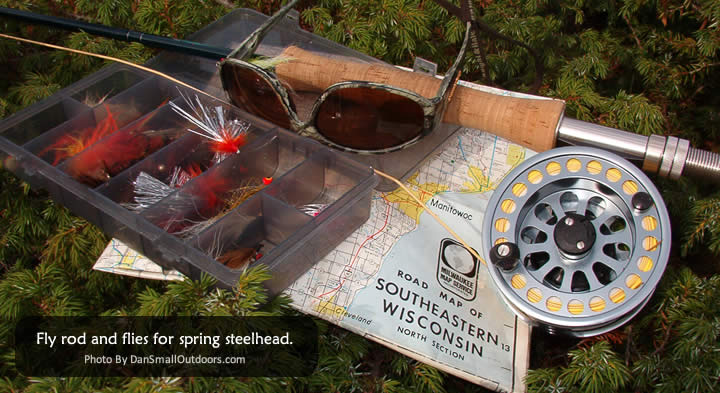 Presentation is the key to getting steelhead to strike. Fishing blind can be productive with hardware or bait, but less so with flies. When you can't see fish, though, it's the only option. Work deep runs, pockets behind boulders, undercut banks and other places where fish rest. Keep the fly near bottom, work it slowly across the current and strike when you feel it stop.

If you see fish spawning or holding near cover, cast upstream so the fly is at the fish's level a foot or so before it reaches the fish. Two or more males will often hover downstream a yard or so while a ripe female digs out a redd with her tail. If you catch one male, another will often move up from downstream to take its place. If you don't spook the female, you can sometimes catch and release several males off the same redd.

A fresh steelie will challenge you and your tackle. If it runs downstream, you must keep your footing while pursuing it. If it turns back upstream, you must reel fast enough to take up slack line. It is tricky to apply enough pressure to turn a fish without breaking your leader.

Every steelhead angler loses fish. A steelhead may sulk or go ballistic. Most fresh fish do the latter. One of the joys of the spring run is that it offers lots of fresh fish, so you'll get plenty of practice fighting them.

Pare your accessories to the bare minimum. Limit yourself to one box of lures or flies. Hang a short-handled net with a deep bag in the middle of your back or land fish by beaching them on shore or a sandbar. Polarized glasses help spot fish in deep or murky water. A wading staff will help you keep your footing in fast current.