Man to Man, Guide to Guide

By Tom Neustrom - March 1, 2012
You could say we northerners sometimes migrate with the geese, or more like snowbirds, to places far from the frosted lands. No doubt, the warm sun on one's back is reward enough, but for many anglers, it's the pursuit of openwater alternatives that lure us southward. For me, even a week or two below the Ice Belt recharges my fishing soul and preps me for the final few weeks of ice fishing.

This past November, veteran walleye chasers Mark Brumbaugh, Tony Roach and I had the opportunity to track walleyes in Arkansas. We were like three giddy kids, knowing the potential and possibilities that lurked in Lake Ouachita. Trailering down, our big Lund Pro-V's became our navigational chariots. But before embarking, we did what all intuitive anglers should - we got a pep talk and mini seminar from a deeply entrenched local. 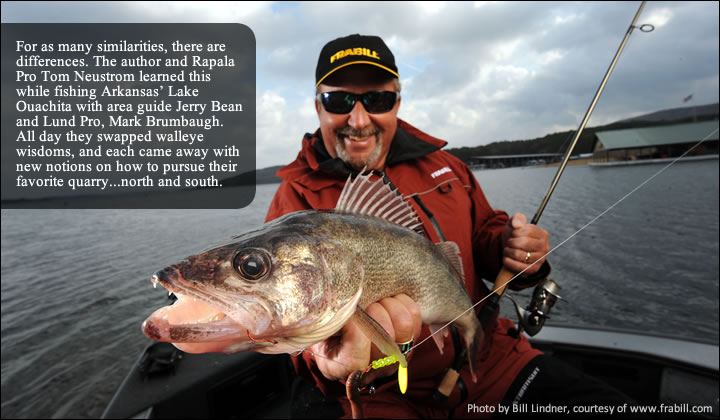 In this case, it was the guiding icon, Jerry Bean. He's an approachable southern gentleman and mountain of a man. Shaking his hand is like being on the wrong end of a vice grip. Jerry is a guide's-guide that knows every inch of Lake Ouachita, every nook and cranny that walleye hide throughout the year. Mark and I had the distinct pleasure of sharing an afternoon on the reservoir with Jerry. We became his students, realizing that we were far from home and needed to listen intensely to the Lake Ouachita professor. Both Mark and I are walleye veterans with deep knowledge of the sacred species, but we were there to listen, learn, and absorb.
"For me, even a week or two below the Ice Belt recharges my fishing soul and preps me for the final few weeks of ice fishing..."
Jerry opened by expressing how essential it is to locate pods of baitfish - shad - that can range as deep as 50-feet. Besides the points and inside turns that Mark and I were familiar with from fishing northern natural lakes, we came to learn that flooded stands of trees and brushpiles, even random groupings, were magnets for baitfish and walleyes in the vastness of Lake Ouachita. There are also monster striped bass that patrol the same food-forests, adding potential shock and awe with light tackle. Fishing wood can be tricky and Jerry has found that heavy jigging spoons (1/2-ounce plus) effectively imitate native baitfish with their flash and wobble. That, and staying vertical is critical in the presence of so much lumber. With a watchful eye on his electronics, Jerry puts that spoon right in the grill of these often suspended fish with the accuracy of William Tell on the apple. My personal pick for spooning in such situations is a Luhr-Jensen Crippled Herring.

When vertically fishing spoons at a multitude of depths, it's essential to get better feel and control by using a high-sensitivity braid. Suffix 832 is the choice of many, including Jerry, as it lays comfortably on the spool and transmits feel better than anything else in the bait shop. We all agreed that attaching a section of fluorocarbon leader - 18 to 24 inches - with an InvisaSwivels softens the hookset while eliminating line twist, too.

Mark and I barraged Jerry with questions about what other techniques could turn these southern walleyes. Being a lifelong student himself, Jerry said he experiments with presentations learned from walleye articles and tricks picked up from customers from the north. Two of his mainstay presentations, when not jigging vertically, are running bottom-bouncers with spinners and fresh kept crawlers from a Frabill Crawler Crib; and jig fishing with minnow-imitating plastics, like Trigger X Action baits. Jerry states that all three have their place in his arsenal depending on time of year and fish preferences, which we all know can change by the day.

With so much timber and brush on the bottom of Lake Ouachita, and other neighboring reservoirs, the bottom-bouncer and crawler combo makes for a nasty, snag-stopping trolling pattern that Mark and I are intimately familiar with. We shared some insider information with Jerry on color selection and blade sizes, as well as trolling speeds. Mark expanded the conversation, talking about the trolling-board techniques that he is so well known for. We talked about jig presentations and Jerry let us know he preferred jig fishing early in the season for walleyes over and around points, creek arms, and sunken islands near shoreline breaks. And there's the nearly certain probability of catching bonus largemouth and spotted bass, with the occasional bruising striper.

During the afternoon we talked about hard-bodied stickbaits and when to fish them. Jerry said with a smile, "You guys don't miss much…" We all discussed our favorite styles and brands and concurred that Rapala Husky Jerks and X Raps bang the most fish because of their neutral buoyancy, realistic looks, and enticing wobbles. Fished over the tree tops or on gravel points early in the season, stickbaits are as deadly as any of the arrows in Jerry's quiver.

Slip-bobber fishing was a relatively new approach for Jerry, and teacher turned student when the discussion came up. We fish small jigs opposed to plain hooks; incorporate attracting beads and even a touch of hair or feather on a jig. Livebait was strongly endorsed by both Mark and I, tipping with a half of crawler, whole shiner minnow, or plump leech - leeches being Greek down this way. (We promised Jerry to find him a source for big black Minnesota leeches.)

Sharing information with one of the best walleye guides in the South was incredibly rewarding. We all learned from each other on his 'Arkansas Campus of Fishology.' But most of all, Mark and I came away with an experience we will not forget and made friends with southern guide who is equally as passionate about walleyes. Editor's Note: Special thanks to Mountain Harbor Resort on Arkansas' Lake Ouachita for providing top-flight lodging along with some serious home cooking. Visit www.mountainharborresort.com. Call 501-282-6104 to book a boat with the amazing Jerry Bean.