Midwinter Crappies in the Mid-South

Crappies call like the Siren's song. No matter where on God's green earth - or frozen planet for that matter - Bro is presently placed, he hears crappies calling. Most often, during the dark days of winter, they whisper things like "come here big boy" and "catch me if you can" through feet of snow-packed ice. Bro answers with his auger and an appetite for eaters. Sometimes, though, southern breezes carry the faint voices of crappies, black and white, from fisheries down yonder. Lately, the enchanting summons harps from crappies on Arkansas' Lake Ouachita.

"Yeah, they call to me," Bro admits aloud about the voices only he can hear. "More like shouting, really, and it rattles my cage. Only solution I can figure is paying them a visit." To that point, there's a red Sharpie circle on the refrigerator calendar.

Fortunately for Bro, and other ice-heads who understand the way of the crappie, fish are fish; crappies are crappies; and if you play with your head, success isn't speculative but imminent whether fishing domestic or foreign waters.

"Right away, you realize you're not on a northern natural lake," Bro explains. "It's reservoir country. Lake Ouachita, for example, is fat part of the Ouachita River upstream of a manmade dam. That fat section, the reservoir, covers over 60,000 acres of rugged fishing terrain."

Long before the lake was created, the river cut through the mountainous topography carving a native channel. The channel remains and is a mainstay factor in finding crappies on Ouachita. The same flooding formula holds true for scores of southern waterways.

Terrain reigns, so Bro immediately sets his sights on the river channel. "Crappies like steep breaks with cover and structure that fade into a big flat. That's universal. So experience tells me to find structure, like a brushpile, that's on a channel ledge."

Brushpiles are all the rage, and turnkey to locating crappies. Beyond their physical location, however, Bro ranks them by order of construction. "Bigger is better when dealing with most structures. But with brushpiles, you need to do some sorting, and composition is more important than overall size."

According to Bro, the more tangled and twisted the better. "You can see it on an underwater camera. In an infested pile, there are fish tucked in almost every gap, even toaster sized holes. Fewer crappies occupy wide open areas in the wood. I suspect it's for the sake of self preservation. Crappies aren't big on exposure to predators like humongous bass or submersible sized blue cats."

Height matters, too. Bro especially embraces piles with the tightest clearance between the tippy-tops of the branches and surface. "A perfect brushpile sets up in 25 to 40-feet of water on or just off the channel, and rises to within 10-feet of the surface. On Ouachita, it might be standing timber as well, trees that were flooded and still stand tall today."

Other brushpiles are manmade - nature providing the wood; man handling the flower arrangements. Electronics in full force, you'll come across them off points, along outside bends in the river channel, and at the mouths of creek arms - those bay-like offshoots to host crappie population replenishment in the spring.

Premium piles aren't exclusive to crappies, either. Bro notes that the archetypal, well architected brushpile will host bluegills, largemouth bass, and spotted bass - even walleyes and catfish flanking the base. With that said, he's especially grateful to find wood brimming with bluegills and or shellcrackers (reddears). "They're insect and zooplankton eaters, so the presence of these other panfish species improves my overall intel. Sure, southern crappies feed on baitfish, but just like my northern posse, they also eat aquatic insects and zooplankton. If there are sunfish, I know the bottom is soft enough to support invertebrates. That, and the wood is likely more fertile - older, richer, and better suited o continuously nurture forage.

"My first snag will tell the story. If the jig rips right out or returns with a rotted, algae covered limb, that's a good thing. The wood is perfectly aged."

Casing out the pile is equally as important as first finding it. There are definite dos and don'ts, though. On his last reservoir retreat, Bro had the good fortune of sharing a boat with iconic Ouachita guide Jerry Bean. "Bean is one savvy crappie fisherman. Not only does the guy have hundreds, I mean hundreds of brushpiles in the palm of his hand, he also knows how to pick each of them apart." 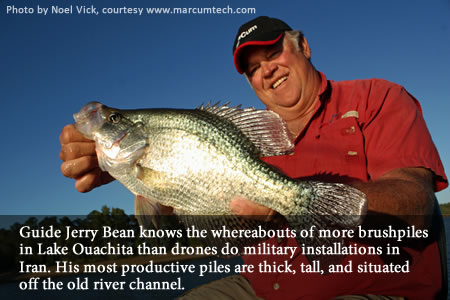 Bean begins by slow trolling the periphery of the structure, one eye fixed on his electronics, the other to shoreline landmarks - basically blending modern fish finding with the timelessness of triangulation. Once he's formed a mental picture of the brush, he throws a marker, an old school float with line and weight. Wisely, though, Bean doesn't plunk it in the brush, knowing it could frighten fish and ultimately end up snarled. Rather, he flips it off the edge. He might even throw a second along the opposing edge of the brush to completely cordon off the area.

In concert with how Bean paints the target, he's just as judicious about presenting to the fish. His "usual" is a 1/16th ounce jig thread with a two-tone silvery and gray grub. The offering has produced in the past; would take a meal of fish this afternoon; and will likely hoodwink crappies a decade from now. The secret is in the fact that it perfectly pretends to be a pinky-length ghost shiner, a delicacy to Ouachita crappies.

Bro counters, and successfully I might add, with a small jig and live minnow. From his Frabill Personal Bait Station he pulls a local run, ghost minnow sized, baitshop minnow. Both boys flip their jigs over the top of the pile and countdown on a freefall. 10 to 12-seconds of pure patience usually flips the switch. Takers are revealed by a twitch in the line or lumbering load on the rod. A high percentage of strikes occur on that much anticipated opening drop.

Bro speaks to the topic of rod selection. "You can't precision cast and retrieve with a broomstick, either. It takes a made-for-the-task rod with a soft tip and quick back." Bro finds those particular qualities in St. Croix Rods' new Panfish Series, namely the 7-foot extra fast (PFS70LXF) rod and 2-piece, 8-foot, moderately fast (PFS80LMF2) version. "The length lets me dabble a jig, ice fishing style, over the brushpile once I've isolated a concentration of fish. The fast tips launch even featherweight baits like hair jigs. And every model in St. Croix's Panfish Series has raw-nerve-ending like sensitivity."

Bro's midwinter night's dream comes to a close. He wakes for one last look at the harbor before boarding the Bro Bus for Minnesota. Late ice awaits him. His northern crappies are getting lonely. But believe you-me, before he hits the Iowa border, those southern voices will start tempting him once more. They'll have to wait for now. But he'll be back.